There’s an old adage that when performing a live demo, previously working hacks will mysteriously go awry. In this case, the hardware demo was doomed before it ever arrived at the conference.

PinJig is an interesting take on though-hole soldering. As its name indicates, it’s a jig which holds through-hole components in place as the board is flipped on its side (or even upside down). This is accomplished by 2000 steel pins which are locked in place after being nestled around all of the board’s components. Unfortunately, carrying this prototype onto an international flight didn’t work out. [Niall Barrett] told us that on his way from Ireland to Bay Area Maker Faire he was required to ditch the 3-inch steel pins that make up the jig, or not get on the plane.

I still really enjoyed speaking with him at his booth where he was showing off the various mechanisms that led to this prototype. Holding through-hole components in place while soldering is a pain — literally. I’ve mildly burned my fingertips numerous times holding components (like pin headers) in place with one finger while trying to apply iron and solder with the remaining digits and other hand. I’ve used blue tack, various types of tape, a third-hand tool, stacked the board and component on random stuff from the bench, and a lot of other half-solutions. It’s not really a problem that has a commercial solution since in production, wave soldering brings molten solder to the underside of the board and gravity does the clamping. 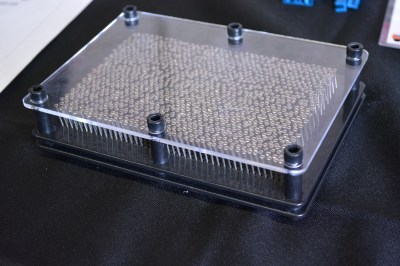 The inspiration for this device comes from Pin Art — a toy which has hundreds of pins arranged in a tightly packed grid. Raise your hand up form the underside and the heads of the pins form a contoured map of it, or any other object. PinJig works much the same way. Place it over the through-hole components and you’ll get a map of the the shapes in the pins. Then lock the pins in place and you can flip the entire assembly over to get at the underside of the board for soldering.

The trick is that locking mechanism. In the video above [Niall] shows off several different prototypes for that lock. First was a plate with a grid of teardrop shaped holes where the pointy part of the tear was rubberized. The second attempt had a plastic tooth parallel to each pin (like a hair brush) that would contact the pins when the plate slides to one side. The third attempt was a set of plastic fins that zig-zag between pins and contact them when stretched.

None of these early attempts were reliable, but the third iteration helped [Niall] realize what would work, stringing fishing line between all the pins. When the line is put under tension this serves as an adequate lock.

Unfortunately we could get a look at a prototype for this because of the missing pins. It also seems like the Indiegogo campaign was not a success as I get a message that the campaign “is currently being updated”. Still, the mechanism is an interesting one, and I could see this being popular to have on hand at hackerspaces or other community workshops where many people are likely to be working on through-hole projects.