This may be the most minimal computer that we’ve ever seen running BASIC. Hackaday.io user [Kodera2t] has been working through the history of computing, so after his 4-bit CPU, he stepped up his game to eight bits. It’s amazing how much can be done with so little. It’s basically a Z80 on a single PCB.

[Kodera2t] is careful to give credit where credit is due: the design of this computer is by [Grant Searle]. It’s amazing what you can do with an old CPU (6809), some SRAM, a controller-interface chip, and an EPROM for your BASIC. Check out the GitHub for the computer’s PCB files if you want to make your own — it’s a very hobbyist-friendly two-layer board with fat traces. Or you could put it all together on a breadboard. It’s that non-critical. 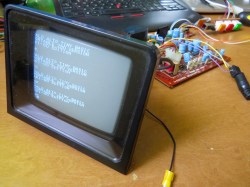 The other sweet touch is this monochrome CRT build that pairs up with the tiny computer.

[Kodera2t] is doing some really clever retro and minimalistic hacks, and putting them all up on Hackaday.io. You should really give his whole portfolio a look. We recently wrote up his experimentations with the Atmel ATtiny10 if you’re in the mood for something more modern.