First, these controllers offer a purely mechanical solution. What that means is that they’re relatively simple in terms of parts. There’s no power supply to worry about, no code bugs to scratch our head over. Once we fasten our cables in all the right spots (and unkink the snags), the controllers just work.

Second, unlike a hobby-servo alternative, these controllers are dead silent when driven by our arms. That “chirp” that’s so characteristic of those cheap hobby servos just isn’t there; and, unless you’ve got some crunch to your wrist and elbow movements, these hand controllers keep the sound of the tentacle motion down to a minimum. For aspiring filmmakers, a quiet prop might sound more appealing than a whiny electronic alternative — even if they can mix-or-delete that sound away in post-production.

Third, unless we have a nice haptics controller, hand control gives us one additional piece of information: force feedback. Can’t squirm any farther into the table or through an obstacle? An electronic solution without a force sensor wont know when to stop tugging. Since our hands clasp the controllers that clamp the cables that carry the tension force through the length of the tentacle, we’re in direct contact with the forces experienced by the tentacle. Because we can feel this force, we can feel the “hard-stop” when our tentacle hits a dead end in its range of motion.

Finally, professionals still use hand controllers as one of many options in their repertoire for puppet controllers. While we’re not machining our controllers from 6061 aluminum like the pros, our plastic alternative isn’t far from tested-and-tried schemes of the past.

I mentioned above that force-feedback comes from the controller’s “hard-wired” relationship to the cables in the actual tentacle. To make this point a bit clearer, one of the oddball consequences of this construction is backdrivability. What this means is that, with our hands, we can manipulate the tentacle, and those movements will feed back up the cables to then drive the controller. This nifty feature is an unavoidable consequence of how the cable is wired. What’s more, it’s an important reminder that the forces that this tentacle “feels” will be carried up through the length of the cable back into the controllers. In other words, if we’re controlling our tentacle by hand and someone seizes it to prevent it from moving, we’ll feel that force carried into the controller to tell us to stop forcing more torque into the controllers.

This controller is targeted for fab on a laser cutter. (Ok, Ok, there’s one 3D-printed part in the BOM too.) The design, though, is just an adaptation of controllers that I’ve seen from special-effects controllers online.

Most controllers that I’ve seen so far tend to separate each degree of freedom into two separate axes, rather than integrate them both into a single multi-axis gimbal. I’m guessing that the reason behind this is ease of fabrication, but I also think that separating each degree of freedom into it’s own pivot point also makes the tentacle far easier to puppeteer with broad, deliberate, hand gestures that require distinct arm movements.

I’ve modeled my controller to take after Landon’s from the Stan Winston Tutorial series. That said, since I was aiming for fabrication on a laser cutter, the finished controller took on an appearance that’s similar in character but separate in both look and feel.

I picked a laser cutter for part fabrication since most of us don’t have the luxury of easy access to a nearby CNV milling machine. Laser cutters, on the other hand, are a lot more likely to pop up in schools and hackerspaces — not to mention that Pololu and Ponoko will also kindly laser cut your parts and ship you back the results.

As for the actual design, my biggest change comes from swapping pulley orientations. Moving the pulley that controls the tentacle “pitch” down to the lower section forces the user to use their entire arm to control that “up-down” motion. In contrast, getting that same “up-down” motion from Landon’s controller relies far more strongly on just wrist movement. That orientation change on these controllers puts far less strain on my wrists, and I hope others can reap the benefit of that swap.

Just like the tentacle, the controller is also a whirlwind of new parts, most of which we haven’t covered before until now. Here’s a quick breakdown of the key features and components that make this mechanism work. Few off-the-shelf hardware parts have been quite as enabling as these two angle brackets, formally known on Digikey as: 612K-ND and 621K-ND. I have so much affection for these parts because, to date, I can’t seem to find any other commodity angle bracket that’s quite as tiny as these two culprits. Furthermore, depending on the bracket type, one or both holes are tapped with a 4-40 thread feature, which makes them ideal for fastening into tight spots without having to worry about accommodating space for an additional screw.

Sure, nothing’s perfect, and these brackets are no exception. However these brackets are being fabricated, they seem to be popping off the assembly line and into my livingroom at an angle that’s not perpendicular enough to use them for any sort of precision alignment. That’s no dealbreaker, though. I use them here to fasten the two pulleys perpendicular to each other on the controller. In this case, the actual plates of Delrin do the work of holding the two pieces in the proper configuration relative to each other. The angle brackets just fasten them in place. 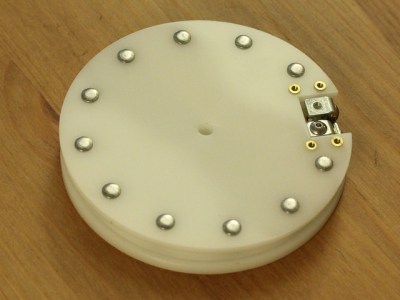 In a bold step to truly push Delrin as a functional material for rapid prototyping, behold my best example of a functional part so far: laser-cut pulleys! These pulleys are a four-plate concoction. When riveted together  (since Acetal doesn’t seem to care much for glue), they behave like a single unit.

To the untrained eye, it looks like an off-the-shelf part. However, two necessary features make this custom design easier to build up from the plates rather than adapt from any off-the-shelf counterpart. First, each pulley is doing the actual heavy lifting of simultaneously loosening and slackening the cable pair that creates the actual movement. To do so, those cables must be rigidly fixed to the pulley at a single point. For that job I’ve embedded two cable clamps into the top of the pulley. Next, this pulley needs to screw down into either a handle, if it’s used on top, or a second pulley, if it’s used on the bottom.

In both cases, those connection points are offset from the center, and most off-the-shelf pulleys simply don’t have any offset mounting holes or attachment points. With some light CAD work, I embedded mounting holes directly into the plate. The result is a pulley with mating features already located where they need to be once the parts are laser cut. What’s more, since the hole pattern that drives these mounting holes is the same for the handle and the joint connector, both top and bottom pulleys are identical — a nifty feature if I ever find myself mass-producing these controllers. (Unlikely, but good habits make scaling easier when it does count!) For the custom needs surrounding this pulley’s end-use, a custom revision just made sense, and they hold up just as nicely as any off-the-shelf solution. 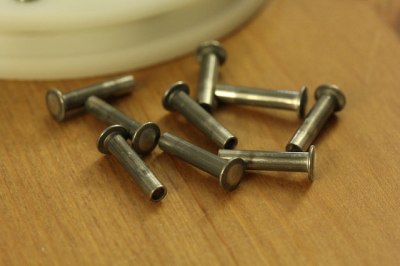 The pulleys might start off as four plates, but once I assemble them together, I can forget about ever needing to take it apart. My pulley will forevermore be a pulley, not the parts that constructed it. Since taking it apart doesn’t matter, I opted for rivets. Rivets give the pulley a polished look, not to mention that assembling these pulleys gives us the chance to enjoy a satisfying squish as we squash each rivet into place. On a more practical note, inserting each rivet is much faster than threading a hole and screwing in a screw for each hole. 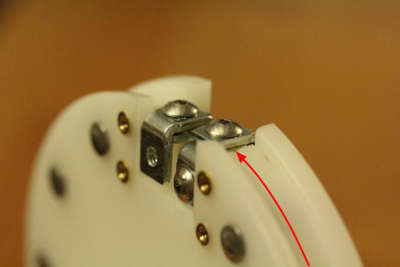 In the homebrew rapid-prototyping world, we’re usually limited to soft or brittle materials since most of our parts are coming off of the 3D printer or laser cutter. What’s more, Delrin has yet another problem: it’s notoriously slippery, so our wire clamping feature can’t rely on pressing the wire against a Delrin plate. The wire will just slip! In these situations, we can redirect critical stress-bearing features to off-the-shelf hardware. Here, our cable clamps are made from two steel angle brackets. The wire rope simply slides through the cavity between these two brackets where it can be screwed down between a steel-on-steel connection. 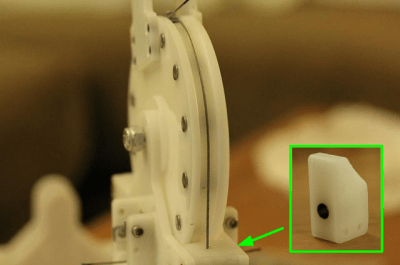 For this part, I opted for a 3D-printed block with a ferrule pushed into it. These metal ferrules are pretty standard components from bicycle and motorbike shops, and it saves the 3D-printed part from wearing out over time. Just like the cable clamps made from angle brackets, these metal ferrules take the stress off our custom parts and redirect them to a sturdier part that we can find off-the shelf. Here, our cable conduit puts more stress on the ferrule than the pocket of the 3D printed part. 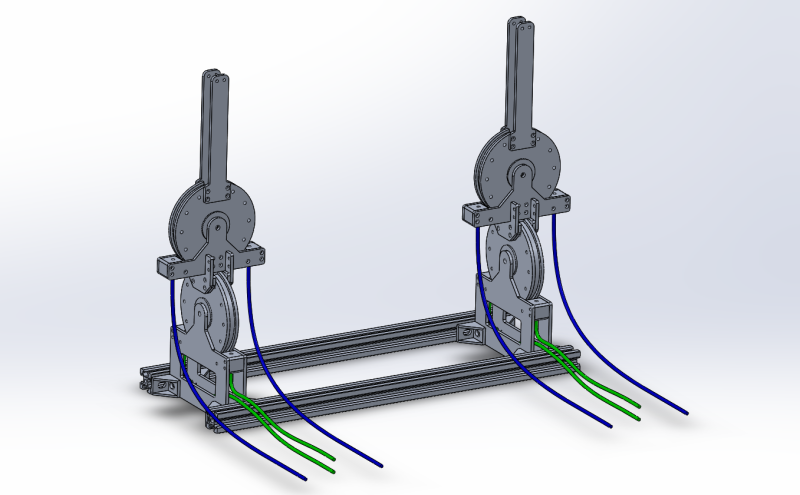 Since I can’t predict everyone’s shoulder widths, I added a few attachment points for Makerslide angle-brackets. The benefit here is that anyone can cut down an extrusion length and space out these controllers in a way that’s comfortable for them.

Get Ready for the Assembly Round:

For the curious, I’ve been doing my best to keep an up-to-date photo log and CAD model of this adventure. Tune in next week for a fully-blown BOM and dxf suite to recreate these controllers and the tentacle at home.

Read more from this series:
The Bootup Guide to Homebrew Two-Stage Tentacle Mechanisms