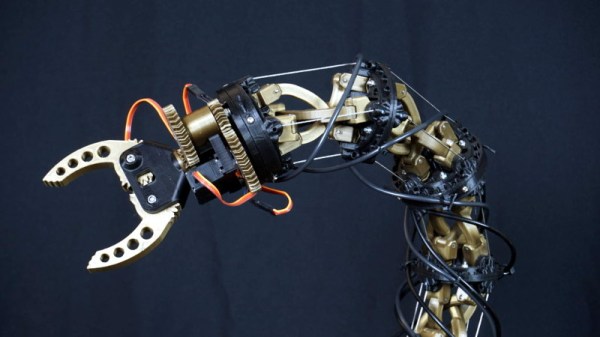 We all bring our own areas of expertise to our work when we build the projects that find their way in front of Hackaday writers, for instance a software developer brings clever brains to their microcontroller, or an electronic engineer might bring a well-designed piece of circuitry. [Yvo de Haas] is a mechanical engineer, and it’s pretty clear from his animatronic tentacle that he has used his expertise in that field to great effect.

If you think it looks familiar then some readers may recall that we saw a prototype model back in February at Hacker Hotel 2020. In those last weeks before the pandemic hit us with lockdowns and cancellations he’d assembled a very worthy proof of concept, and from what we can see from his write-up and the video below he’s used all the COVID time to great effect in the finished product. Back in February the control came via a pair of joysticks, we’re particularly interested to see his current use of a mini tentacle as a controller.

At its heart is a linkage of 3D-printed anti-parallelograms linked by gears, with cables holding the tension and controlling the movement of the tentacle from a set of winches. The design process is detailed from the start and makes a fascinating read, and with its gripper on the end we can’t wait for an event that goes ahead without cancellation at which we can see the tentacle for real.

If you’d like to see more of [Yvo]’s work, maybe you remember his wearable and functioning Pip-Boy, and his working Portal turret.

END_OF_DOCUMENT_TOKEN_TO_BE_REPLACED 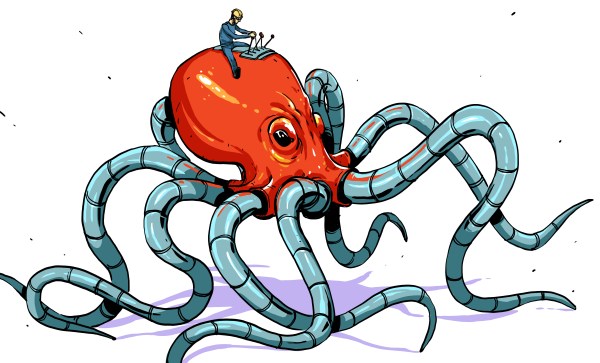 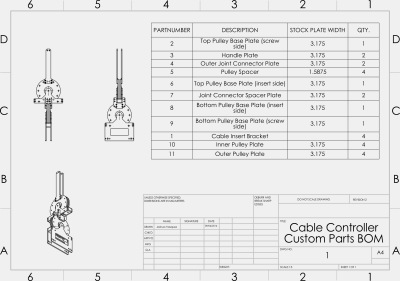 END_OF_DOCUMENT_TOKEN_TO_BE_REPLACED

[ivorjawa] is putting on a haunted house this Halloween that we really don’t want to go to. His robot tentacle is already supremely creepy, and we’re assuming it will only be more frightening once it’s covered in fabric and foam rubber.

Each tentacle can move on two axes thanks to four steel cables running through this strange Geiger-esque contraption. In the base of the tentacle are two stepper-motor driven cylinders that take up slack on one cable and draw out another cable. Two of these control boxes, driven by a stepper motor and an Arduino motor shield, allow the tentacle to reach out and grab in any direction. You can check out the mechanics of the build on [ivorjava]’s flickr

On a semi-related note, even though we’re more than a month out from Halloween, we should have more Halloween builds in our tip line by now. If you’re working on one, don’t be afraid to send it in, even if you’re just showing off a work in progress.

END_OF_DOCUMENT_TOKEN_TO_BE_REPLACED 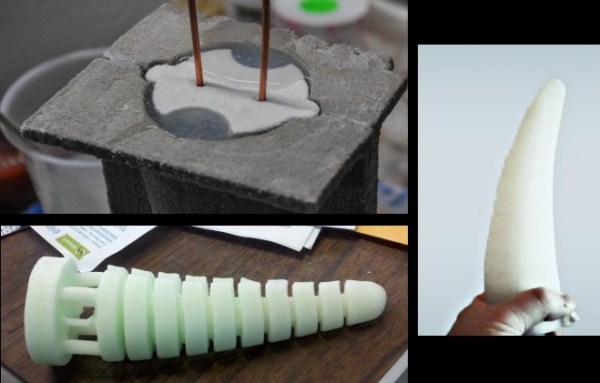 Soft robots are a peculiar wing of technology. They don’t use frames and motors for locomotion, but as the name implies they are made of soft materials. They move by pumping fluid — it could be air or liquid — in and out of bladders that push or pull against the body itself. [Matthew] points out that fabricating soft robots has traditionally been a time-consuming and difficult task. He’s trying to make it easier by 3D printing molds into which soft robots can be cast. This way the parts can be designed in CAD, converted to a mold design, and pushed to a 3D printer.

The object with which he’s been testing the technique functions like an octopus tentacle. The image at the bottom left illustrates the internal structure, with rings separated to allow the appendage to flex, and tubes running parallel to the appendage to provide the force needed to bend it. Above that image you can see one of the molds that was used, and the final product is on the right. The video after the break shows a demonstration of this bending left and right as air is pumped in using the bulb of a blood pressure cuff (or Sphygmomanometer for those paying attention).

END_OF_DOCUMENT_TOKEN_TO_BE_REPLACED Tentacles have inspired fear and respect in humans long before anime came into the scene. Sailors shivered in their timbers at the thought of the great Kraken, or that octopus from 20,000 Leagues Under the Sea. It’s no surprise to know that humans have been trying to harness this fear and respect in technological form since the mid-20th century at least.

The fascinating world of tentacle robots has come a long way. It used to be that every breakthrough in tentaclebot technology had to be justified with either a military or misogynistic application, as demonstrated in this remarkable MIT project from 1968.

Thankfully our society has moved on since those misguided times, and while there is still the ever-present military-industrial complex to push for tentacled combat-omatons, forward-thinking people on the domestic front like [festo] demonstrate that at least some of us want to use tentacle robots for peace, love and food handling.