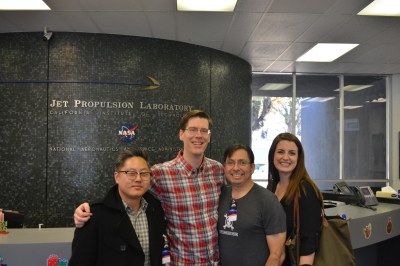 I’ve known Steve Collins for a few years now, since being blown away by his talk during the Hackaday 10th Anniversary mini-con back in 2014. He extended the invitation then to tour JPL with him, but since I don’t live in the LA area it had always been an issue of scheduling.

Steve has since been a huge part of the Hackaday family, attending and speaking at multiple Hackaday LA meetups, and at the Hackaday SuperConference this past November. He organized the tour, not just for me but for Hackaday’s Art Director, Joe Kim, Katie Gregg and Tom Mix who are veterans at organizing our live events (you’ll remember them both from SuperCon), and Aleksandar Bradic who is a Contributor at Large and Supplyframe Overlord (he’s holding the camera).

A Quick Spin Through the Museum

Voyager probe in the background

Model of the Casini Probe

SMAP deployable antenna all folded up

One of the problems with showing your work when you’re NASA is that all the successful stuff is literally no longer on the planet. Luckily they have a museum that has held back some prototypes and been populated with models of many of the missions.

When you walk in the first thing you encounter is Explorer 1, the hardware which launched the first American satellite in to space. The model of the SMAP project is also on display and it includes a parabolic radar reflector which is launched as a deployable. Look at the folded up version and the deployed version above — it’s amazing that so much can be packed into such a small space.

This shovel has been to space

Everyone’s heard of the golden record which was sent out on Voyager. It was amusing to hear Steve explain how the diagrams on the record case are meant to explain where the probe comes from and how to decode the information within. He did point out two of his favorites that are on exhibit: an excavation scoop from one of the moon rovers (look, pop rivets!), yes this was actually brought back from the moon along with the moon rock which is on display next to it.

Hardware that Will Fly

Grapple fixture for the OCO-3 mission

After the museum we shuffled over to the buildings where flight hardware is being assembled in clean rooms. It was great to see the grapple that will be used to dock some of this hardware with the robot arm on the ISS. Check out the tracking pattern that includes a long white line with a circle around a post. There is a white dot on that post to aid in proper alignment when zeroing in on the fixture.

From the high bay we saw engineers testing electronics for use with the Orbiting Carbon Observatory 3 (OCO-3). Watching them scope out the board and take pictures of the test readings with a smartphone was somehow very awesome. On the way out Steve showed us a photo of a test chamber on campus which has liquid nitrogen conduit running through it to take equipment under test down to space-like colds while under vacuum. The top of the chamber has huge mirrors which reflect light from xenon lamps to simulate the warming power of sunlight while preserving the cold environment.

This is 3D printed aluminum

Dan Hienzsch, the Resident Engineer at the Supplyframe Design Lab, connected us with two other engineers at JPL: Michelle Easter and Mieszko Salamon. We were able to make it to Mieszko’s lab on campus which is stocked with hand-me-down equipment from other US Government agencies. You’d never know it, this lab was packed with awesome.

On his bench is the drill prototype for the Mars 2020 rover. It will be a hammer drill that takes rock samples about the size of a pencil eraser. The idea is to pack about four dozen of these into a softball-sized container and launch it back into Mars orbit for retrieval by a future Mars mission which will return the samples to earth. Very crazy!

Seen here is the drill enclosure which is 3D printed in aluminum. The I-beam you see is an assembly aide. The drill shuttle itself has about 1 mm of clearance to fit inside the enclosure but once installed the beam will be removed. The drill isn’t mounted on the shuttle yet, but you can see to the left the two probes which will indicated the drill is positioned correctly and help with stabilization during drilling.

Unfortunately we didn’t have the opportunity to make it to Michelle’s lab to see the long range communications hardware she is working on. But we suspect we’ll be seeing a lot more of Michelle in the coming months. She’s the founder of the Mind Makers project and will hosting some of their events at the Supplyframe Design Lab. We’ll try to get a subsequent trip to her lab organized if possible.

When those Mars drill samples return to earth they’re going to have a rough re-entry. Obviously you don’t want the container to break open, spoiling the samples or worse. They’ve been testing that with a huge impact stand. It’s basically a slingshot aimed at the ground. Soil with different properties is tested for every possible case.

“Scarecrow” — test rover with no brain

The final portion of our tour was in the Mars Rover test yard. They have a rover without a brain called “Scarecrow” that is used to test wheel durability. It’s been decapitated to even out the weight since Earth’s gravity is stronger than that on Mars. While looking at Scarecrow we met two engineers testing out a precision winch mechanism. This is hooked up to the rovers under test to provide a measurable load which can establish traction data for all kinds of scenarios.

Robot arm on front of rover

Steve was integral in landing this rover safely on Mars

These are probably wheel designs being tested for the 2020 mission

Steve Collins is an Attitude Control Engineer at JPL. He was in the room making sure the Curiosity rover made it safely to the surface of Mars. It is very cool to go and take a look at that equipment with him. This amazing engineering feat seems impossible, but thousands of people working together achieved that goal and that is awe inspiring.

We were able to take a look inside the storage shed at Curiosity’s twin which is not even remotely part of your average tour. It is an impressive piece of hardware and whenever the real Curiosity encounters problems this is where the solutions are found.

It was an incredible day. Seeing the history, hearing Steve’s recollection of missions he’s been involved with, and speaking with him as well as Michelle and Mieszko about Mars 2020 and other efforts was delightful. Thank you to Steve Collins and JPL for making this tour possible.