[Alan Yates] is a hacker’s engineer. His job at Valve has been to help them figure out the hardware that makes virtual reality (VR) a real reality. And he invented a device that’s clever enough that it really should work, but difficult enough that it wasn’t straightforward how to make it work.

In his presentation at the Hackaday Supercon 2016, he walked us through all of the design and engineering challenges that were eventually conquered in getting the Lighthouse to market. We’re still a bit overwhelmed by the conceptual elegance of the device, so it’s nice to have the behind-the-scenes details as well.

Figuring out where the viewer’s head is located (and oriented) in a room is an old problem for VR, and there have been a number of solutions in the last few decades.

Lighthouse is very clever. It uses a few beacons placed inside the room that paint the room with IR light. From these signals, any receiver in the room can tell where it’s located by triangulation. The fundamental idea is that instead of measuring angles, which is hard to do with sufficient precision, the Lighthouse system reflects IR beams off of spinning mirrors inside the beacons — hence the name — which effectively turns the problem of measuring angles into one of keeping the rotation rate very constant and measuring time differences. 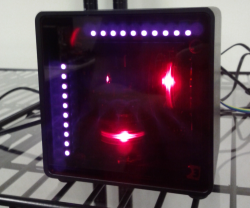 There’s a room-wide flash for synchronization, and then two beams sweep in the X and Y directions across the room. From the time difference between the flash and the sweeps, a microcontroller and a photodiode, plus some trigonometry, is all you’d need to tell where the receiving device is. No network communication, no centralized server, no nothing; the simple passive detection of the sweeps does most of the work.

And we say most. The sweeps don’t come as often as you’d like. Most systems using Lighthouse also have an inertial measurement unit (IMU) with an accelerometer and a gyro. The IMU takes care of high frequency movements, and is disciplined by the less frequent Lighthouse updates. Combined, the system has very fast response as well as long-term accuracy.

Imagine that you wanted to tell where something was located to within 1 mm at a range of 5 m. That gives you an angle of 200 microradians: the same angle subtended by the width of a piece of typing paper held out at arm’s length! Yeah. Worse: to get range information from the triangulation procedure, they needed four times that much angular resolution. Turned into a time, based on a 60 Hz spinning cylinder, that boils down to measuring times to within one cycle of a 48 MHz clock tick. No problem for a microcontroller.

But making sure that the rotating mirror spins at a constant rate to that same degree of precision is difficult. They used an optical reflective sensor that is extremely thin: 94 nanometers. Then there’s the motor control system that processes this information. They got it working well enough to come around to the same position to within 2,500 atoms(!) using a piece of aluminum tape on a plastic rotor, with some fancy fluid-dynamic bearing motors from hard drives.

Then there’s the receiving end. They couldn’t use ridiculously strong laser beams for the sweeps, so there’s 120 dB of analog gain, with some signal conditioning going along the way. The beam sweeps by the sensor at about Mach 5, and the sensor, a normal old BPW34, is only a few millimeters wide.

The path to Lighthouse’s success looks a little bit like the floor of our office — strewn with failed prototypes, half-baked ideas made material, and lead-filled trial balloons. Things that you might expect to work, like a nice fancy ball-bearing motor, turn out to have to much friction and glitch irregularly. 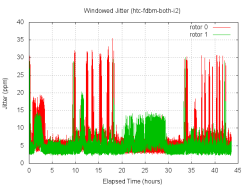 To build a prototype, they started off with laser line elements from eBay. And they worked fine for the crappy proof of concept, but simply aren’t built to the specs that Valve needed for a high-performing product. Further, they were about to order hundreds of thousands of each piece — they needed to assure this same quality over the length of a long production run. And that’s without considering heat or lifetime of the laser. 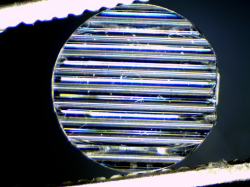 Sourcing lenses wasn’t any better. They ordered them from one firm that shipped them a bag of 10,000 loose lenses that arrived, naturally, scratched. The next manufacturer sent them three different kinds of lenses, sold under one SKU. In the end, they ended up making their own lenses because they needed to.

[Alan]’s talk was remarkably frank. It was like he was speaking to a technically-minded audience who cared about the way things work. (He was.) And that means that he got to dive into not only the fails and stumbling blocks, but even the dark corners of the design where there’s still room for improvement.

The optical sync is still an open issue, for instance. Although fiendishly clever, it’s probably the limiting factor in expanding the system to larger rooms; it uses a peak 50 W per blink. The length of time that the sync beam requires slows the overall system down as well. The sensors can’t react to the sweeps while they’re still blinded by the sync. Is there an RF / light hybrid in our future?

The photodiodes used are big, for increased sensitivity, but they’re off-the-shelf parts. Because they need to see each beacon in the room, there are many of them. These two facts create a design challenge for making smaller tracking devices.

With all of the research blood, sweat, and tears expended on the mechanical motor system, [Alan] suggests that maybe a MEMS or some other electro-optical path to making the sweeping beams might be an improvement, if it can be made to work with the same degree of resolution, that is.

The distance from the sensors is triangulated, based entirely on angles. If it were also possible to add a time-of-flight measurement component to the sweeping lasers, that would make 3D localization that much easier.

At the end of the talk, [Alan] pointed out that the Triad Semiconductor will sell you an ASIC on a breakout board that will greatly simplify creation of your own Lighthouse-enabled device. HTC, the company that sells the whole system, will sell you the beacons singly if you don’t want the entire VR experience. This is a very open and hackable technology.

Indeed, as [CNLohr] was working on reverse engineering the protocol that one of the HTC Vive controllers uses, none other than [Alan Yates] himself stopped by to offer him hints, without dropping any spoilers. Now that’s hacker-friendly.