A lot of science museums and parks feature something called an acoustic mirror. The one at Houston’s Discovery Green park is called the listening vessels. [Doug Hollis] created two acoustic mirrors 70 feet apart, pointing at each other. If you stand or sit near one of the vessels, you can hear a whisper from someone near the other vessel. The limestone installations (see right) are concave and focus sound like a parabolic mirror will focus light. 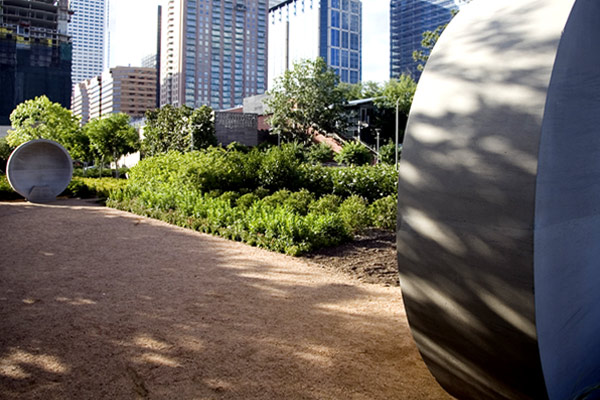 Just a science curiosity, right? Maybe today, but not always. The story of these devices runs through World War II and is an object lesson in how new technology requires new ways of thinking about things.

Adapting to the New

I’ll get back to the acoustic mirrors, but first, consider how changes in technology can sometimes change how we do things in a fundamental way. That’s easy to see in retrospect. There used to be a huge industry revolving around harvesting and shipping ice from cold climates to other locations. Refrigeration killed that off. Even though there are still people who make horseshoes, it’s obvious today’s need is a shadow of the demand found prior to the automobile.

It is harder to see that while it is happening. It looks like widespread acceptance of bank cards has all but killed off the paper check, for example. It used to be common for people to use travel agents. Big companies that used to provide dial up Internet access are all but gone or–at least–transformed beyond recognition.

Recognizing the changes in real time can be the difference between success and failure. One example of this is the advent of RADAR during the second world war, and the recognition of how it was different from previous airplane detection methods like acoustic mirrors.

World War II was a time of a lot of technical innovations that changed combat. One well-known story is that the Battle of Britain was won by the timely development of RADAR. Without RADAR, the British couldn’t defend their entire airspace with the number of planes available. The whole story is a bit more complicated and–believe it or not–starts with acoustic mirrors. 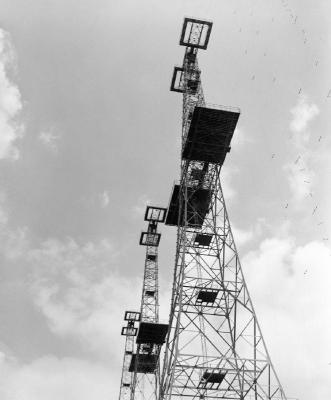 Both the British and the Germans had RADAR. The British, however, realized that just detecting aircraft wasn’t enough. You needed a sophisticated command and control system that could rapidly develop a picture from multiple inputs, allocate resources to threats, and dispatch them.

If you have a picture of a modern RADAR installation, you have to scale back your imagination. The British Chain Home RADAR stations sent out signals between 20 MHz and 30 MHz at 350 kW. The antennas were more like ham radio antennas than what we think of as RADAR dishes today (see left). In fact, the towers supported several dipoles and reflector wires. The transmitters were in wooden buildings.

On the other hand, the Germans did knock out at least one Chain Home station, but the towers were too hard to permanently disable and the station would return to the air quickly. The Luftwaffe decided it wasn’t worth the effort and focused on more conventional targets.

This would turn out to be a mistake. Spending time destroying the RADAR would allow future bombing raids to be far more successful and could have turned the tide of the war. 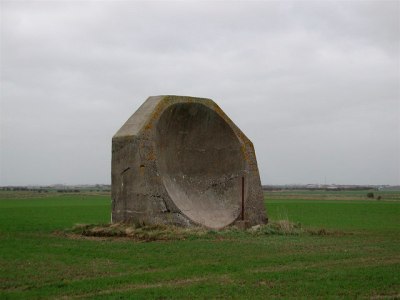 While today the acoustic mirror is a museum curiosity, before World War II, it was a method of detecting aircraft. The mirror could focus the sound from an aircraft engine allowing early detection. There are several of these stations still on the coast of Britain (see right) and one in Malta. A microphone picked up the sound and the construction wasn’t actually parabolic, they were spherical mirrors. The reason is that a parabolic mirror has to move to determine direction, while a spherical mirror could detect direction by moving the microphone.(As an aside, the observatory at Arecibo is also a spherical reflector, but for radio waves.)

Acoustic mirrors were never very successful and as planes became faster, the detection range of the mirrors become less useful. With the advent of RADAR they quickly fell by the wayside. However, the program of using the intelligence from the mirrors (led by [William Tucker]) became the core of the British command and control system.

Many historians agree the German RADAR systems of the time were more sophisticated than the British. They featured a magnetron at 600 MHz for an emitter. They also employed modern features like lobe switching and duplexers. But the British made more effective use of RADAR thanks to [Tucker’s] methods.

We’ve all seen a guy trying to fish with an expensive set of new gear catch nothing while an old timer with a stick and a worm catches the limit. A smart engineer with a volt meter can do more than a dummy with an oscilloscope. It might be simplistic, but from a technology point of view, the British won the Battle of Britain for two reasons: they understood the ramifications of RADAR (thanks, at least in part, to previous experience with acoustic mirrors) and–perhaps more importantly–the Germans didn’t.

The point is that understanding technology is important. We all like to do that part. But sometimes, understanding how the technology fits in with people and processes and how the tech might fundamentally change things is also important. Sometimes we cling to old ways too long. Other times we develop something new and fail to see how it could be used in the best way.

As new tools are available to us, we should constantly be thinking how to best use them. Sometimes that answer will be technical and sometimes it won’t be. Are we using, say, 3D printing in the best possible way? If you want key chains and vases, maybe. But what are the fundamental ways we can use them to do something new and different? As embedded processors get more and more powerful, are we finding new and better ways to develop for them? Or are we clinging to our favorite platform and language instead of using something new and different?

42 thoughts on “Acoustic Mirrors: How To Find Planes Without RADAR”