Surface mount diodes are simple enough — all you need to do is make sure you have the anode and cathode in the right order when you place them on the pad when you solder them. These SMD diodes come in industry-standard packages, but do you think there’s an industry-standard way of marking the cathode? Nope, not by a long shot. To solve the problem of figuring out which way the electrons go through his LEDs, [Jesus] built a simple pair of LED tweezers.

The purpose of these tweezers is to figure out which way is up on a LED. To do this, [Jesus] picked up a pair of multimeter and power supply compatible SMD test clips that are sufficiently tweezy. These tweezers come with red and black wires coming out the back, but cutting those leads off, peeling back the insulation and adding a CR2032 battery holder and 220Ω resistor turns these tweezers from a probe into an electrified poker.

To figure out what the arcane symbols on the bottom of an SMD diode mean, all [Jesus] has to do is touch each side of the pair of tweezers to one of the contacts on a LED. If it lights up, it’s that way around. If it doesn’t light up, the battery is dead, or the diode is backwards. It’s a great project, especially since these SMD test clip tweezer things can be had from the usual online retailers for just a few bucks. We would recommend a switch and marking which tweeze is ground, though. 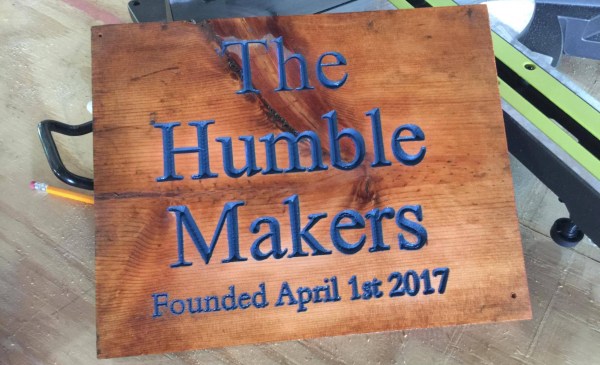 Starting up a new hackerspace from the ground up is a daunting task. Before you even think about the fun stuff like tools and a space, you’ve got a ton of social engineering to do. Finding like-minded people with the drive and passion for seeing the project through is a major stumbling block where many projects falter. If you get past that, then figuring out a corporate structure and getting funds together to start building something can be difficult, as can local permits and the endless red tape that always seems to accompany anything seen as new or innovative.

But finally the magic day comes for your group to open the doors on the new hackerspace, perhaps with an open house or some event to bring the community in and maybe rustle up some paying members. It should be a happy occasion, but for a new hackerspace near Houston, the grand opening celebration was thwarted when thieves broke into the space and cleaned out all their tools days before it opened.

END_OF_DOCUMENT_TOKEN_TO_BE_REPLACED 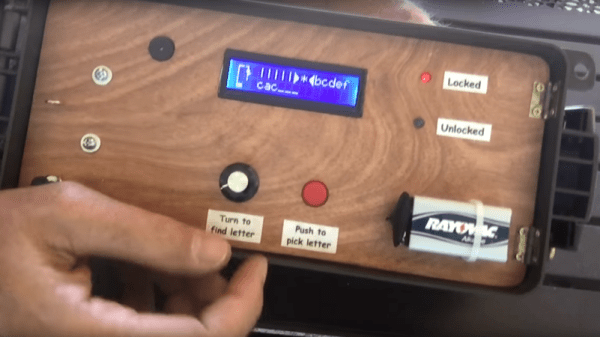 For those who love to hike, no excuse is needed to hit the woods. Other folks, though, need a little coaxing to get into the great outdoors, which is where geocaching comes in: hide something in the woods, post clues to its location online, and they will come. The puzzle is the attraction, and doubly so for this geocache with an Arduino-powered game of Hangman that needs to be solved before the cache is unlocked.

The actual contents of a geocache are rarely the point — after all, it’s the journey, not the destination. But [cliptwings]’ destination is likely to be a real crowd pleaser. Like many geocaches, this one is built into a waterproof plastic ammo can. Inside the can is another door that can only be unlocked by correctly solving a classic game of Hangman. The game itself may look familiar to long-time Hackaday readers, since we featured it back in 2009. Correctly solving the puzzle opens the inner chamber to reveal the geocaching goodness within.

Cleverly, [cliptwings] mounted the volt battery for the Arduino on top of the inner door so that cachers can replace a dead battery and play the game; strangely, the cache entry on Geocaching.com (registration required) does not instruct players to bring a battery along.

It looks like the cache has already been found and solved once since being placed a few days ago in a park north of Tucson, Arizona. Other gadget caches we’ve featured include GPS-enabled reverse caches, and a puzzle cache that requires IR-vision to unlock.