It’s important to consider why semiconductor devices were necessary in the first place, and author Gertner masterfully tells that tale. AT&T is a communications company whose early accomplishment was to traverse the continent with wire-based communications. The distances traveled posed the problem of signal decay caused by the increasing resistance with every foot of copper in the system. The only way to make such a link work is by relaying the signal through a series of amplifiers originally built using vacuum tubes, and an immense number of them. The secret to making this possible, and equally important to make it profitable, was to perfect a manufacturing process that resulted in long-lasting and predictably performing tubes. Bell Labs delivered.

Even with this leap in reliability, the tubes still used quite a bit of power to operate and needed replacing on a regular basis. On a transcontinental line, replacing vacuum tubes is possible. But trans-oceanic lines are another thing entirely. Although successful connections between North America and Europe were laid with vacuum tube amplifiers integrated in the cable, its construction again depending heavily on the material science of the Labs, the need for something far more reliable was clear and this led to the semiconductor efforts resulting in the solid state transistor.

Incidentally, the rest of history interfered in the effort. It appears that the transistor could have been in place decades earlier than it was had World War II not occurred, which diverted the Labs attention elsewhere. But as the book details, even this led to amazing discoveries that built our modern world as huge numbers of scientists from Bell Labs joined the war effort and moved the mountains of radio technology with advancement in both wireless communications and perhaps more importantly, radar.

Perhaps most remarkable about the Bell Labs story is the recording of its history. It’s not a stable of historians that makes the retelling possible, but the enforcement of documentation by every engineer that was followed like religion. Every researcher was issued leather bound engineering notebooks with a simple set of guidelines.

At Bell Labs there was no such thing as a back of the napkin calculation. Everything was recorded in these notebooks. Every idea was documented and any that were felt to be promising were then witnessed by signature from another member of the labs. Pages were neither added, nor torn out, and incorrect information was neatly crossed out and initialed by the one doing so. This was done for the purpose of the patent process. But the result is an amazing library of the process that led to some of the greatest scientific leaps forward in all of human history.

The talent that passed through the Labs is a roll-call of great minds. Part of this is a product of the times; the most brilliant minds graduating from University during and after the great depression could find no better way to make a living. With a critical mass of talent it wasn’t just the money or stability, but the urge to join the best collection of thinkers and technicians ever assembled.

The Pedagogy of Bell Labs 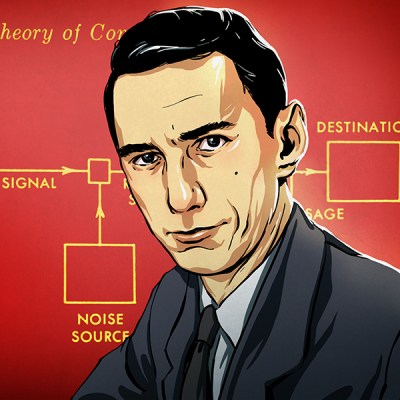 Jon Gertner has a real knack for humanizing the people who made these discoveries. To share one anecdote, I had reread a few paragraphs of one story about a promising young student taking piloting lessons in the 1930’s. His professors at MIT heard about his extra-curricular activities — somewhat dangerous for the times — and considered asking him to knock it off lest his great mind be lost to humanity. This is the introduction of Claude Shannon, the father of information theory.

The sharing of knowledge and experience both inside and outside of the organization was integral to the culture of Bell Labs. It was commonplace to have interdisciplinary seminars during the work week, and at private residences. Engineers and technicians were encouraged to work outside of their strict assignments, and trips throughout the country and abroad to both present and attend seminars pollinated the scientific community rather than locking up the information in a walled garden.

The stories go beyond Bell Labs themselves, to things like the formation of Intel by Labs alum Bill Shockley. He had a habit of spotting talent and brought Gordon Moore on board when starting the new company. Gordon’s namesake is of course Moore’s Law. The book is sprinkled with too many of these connective mentions to count. Those who worked at the labs went on to found and forward the companies that accelerated the technology revolution.

The History of Communications

The story of AT&T was the story of communications. From a wire, to a microwave relay network made possible by the transistor, it seemed the writing was on the wall for direct connections. Bell Labs developed the first communications satellite in the form of a reflector that bounced signals from one coast to the other. This was followed by active relay satellites which are the earliest ancestors of those that we use today.

But the bandwidth of direct connection was still desirable, and for me it was remarkable to hear the story of a vast network of waveguide technology that was nearly implemented before being shoved aside by the remarkable performance of fiber optics. Two things made fiber possible. One was the perfection of fast-switching laser technology. The laser itself wasn’t invented by Bell Labs, but the technology that allowed fast switching, durable lasers was. The second development was an external perfection of glass fiber manufacturing envisioned at the Labs but made possible by the institutional knowledge of Corning.

Connecting the system together were the first field-programmable computers. They replaced mechanical switching and, in a brilliant leap in future-proofing, made the AT&T system an information network instead of merely a telephone system. They were key in the formation of the early cellular network that came into being near the end of Bell Labs’ glory days.

Woven throughout the story is the tale of Ma Bell, the AT&T monopoly that was in place for decades, first with the blessing of the American government and then ultimately broken up by the same. This review is far too brief to cover everything but in at lest a couple of ways the monopoly made this scientific research possible.

As a monopoly, AT&T had an abundance of funds to support their research and development. The first day of work for all Bell Labs engineers included a $1 payment for all patents they were awarded through their work. As a concession to maintain the monopoly the company licensed all of its patents to any other American company, royalty free in almost all cases. Think on that for a while.

Technically, there is still an ancestor of Bell Labs around today. But this book is not actually a story of the company itself. It’s a tale of the collection of people, and the circumstances that brought them together and challenged them to change all of humanity through their work. You live in the world that they enabled. Reading The Idea Factory by Jon Gertner will stitch together myriad tales you’ve heard, but never understood how tightly interconnected and fascinating they are as a whole.

27 thoughts on “Books You Should Read: The Idea Factory”