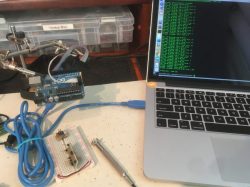 After a mock-up of some fresh code a 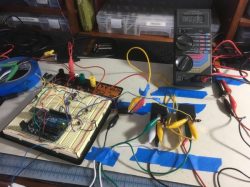 nd testing it without problems, getting stable power to the Arduino was the next major hurdle. Since the car  doesn’t provide a nice stable supply — with numerous unpredictable disruptions besides —  a 7809 voltage regulator did the trick in protecting the Arduino. But what about the electric motors for the spoiler? Well, a 2N3904 NPN transistor worked in theory — until it blew and was replaced with one of the beefy 160V, 15A transistors that were salvaged from the original circuit. A trio of commonly available — anticipating any race-day breakdowns — SPDT automotive relays drive the spoiler motors and a ‘flywheel’ LED, carefully placed, handles surges once the motors shut off.

So, the spoiler rests in the down configuration and can be raised at the push of a button when the driver feels it’s needed, but what about when braking? Well, [Quinn] was able to piggyback a signal off the brake lights to automatically raise the spoiler whenever the bake is engaged. Awesome! 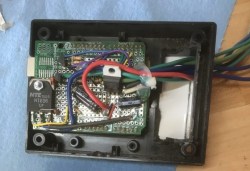 and putting it all together, it worked! Cleaning and closing up the original project box so it would actually protect the electronics this time around, along with proper documentation and automotive diagrams, and this system was ready to be shipped back just in time for the car to be taken off the road due to extenuating circumstances.

Hacking race cars can improve performance — such as we have here — or bring fans closer to the action, but one of our favourite was when we featured a race car that was actually an amphibious race helicopter.

37 thoughts on “Spoiler Alert! Repairing A Race Car Can Get Complicated, Fast.”