If you look at computer books from that time period, they weren’t aimed at a particular computer that you could buy. That might be surprising at first glance since at the time there were not many different kinds of computers. Instead, the books focused on some made-up computer. There were two reasons for this. First, it ensured that as many people as possible could benefit from the book — the market was a lot smaller than it is today. Second, the made-up computer was usually set up to be easier to understand than the real computers of the day.

This last point is important because you were not going to be allowed to run your programs anyway. You’d test your ideas by pretending to be the computer and working out what was going on manually. Your instructor (or, more likely, a grad student) would do the same thing to determine if you got the right answer or not. Trying to simulate exact hardware of a specific CPU didn’t make much sense.

However, these systems all had one thing in common. They forced you to really understand what the computer was doing at a low level. You can’t write a single line of code to print the sum of two numbers. You have to code the operations to load the numbers, code the addition operation, and then understand where the result goes. You had to be the computer.

You could argue that some of that is just learning assembly language or, at least, a low-level language. However, you’ll see that because for most of these systems (at least in their time) you were the computer, you had to really understand the processor’s workflow.

My first exposure to this technique was from a book I got from a local library in the 1970s. It was an old book even then (from 1962). In fact, there were a few versions of the book with slightly different titles, but the one I read was Basic Computer Programming by [Theodore Scott] (Computer Programming Techniques was the title of a later edition). Keep in mind this was years before BASIC the computer language, so the title just meant “elementary.” This was an unusual book because it was a “TutorText” or what we would call now a programmed text — like a “Choose Your Own Adventure of computer programming. 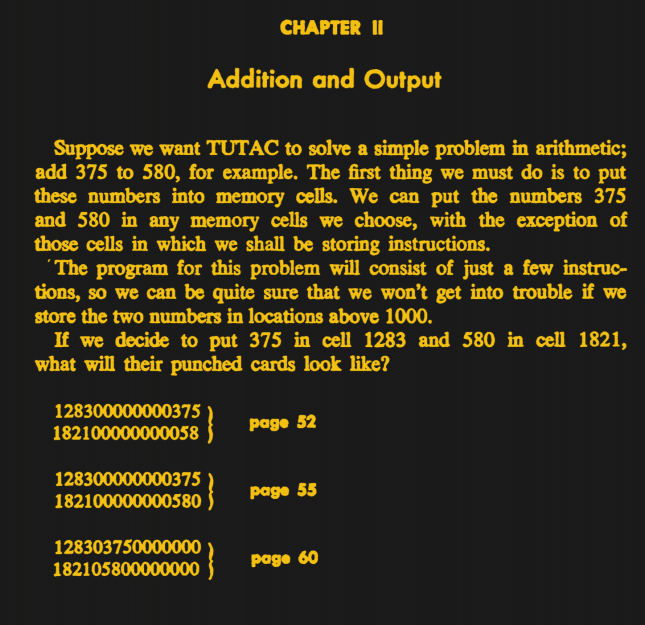 As you can see, you’d read a bit of text, look at a problem and based on your answer, jump to another page. If you were wrong, the page would explain to you what you did wrong and usually offer another problem to see if you had it figured out. If you were right, you’d move on to a new section. You can read the whole book online and, surprisingly, if you were trying to learn to program from zero, I would highly recommend it. Sure, some of the content is way out of date, but the concepts are solid. The programmed text is probably best put on paper, so maybe this is one of those PDFs you print out. Or find a copy of the book in hardcopy, which isn’t impossible. 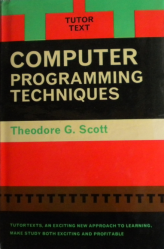 The inside covers of the book described the mythical machine, TUTAC. It had many features that became uncommon very early in the computer age. For example, TUTAC uses decimal numbers. Indexing occurs by having the program rewrite the target address of other instructions in the program. This used to be common before the inclusion of indexing registers. Fortunately, the scan of the book did scan the inside covers, so if you really want to read the book in PDF, you are set.

If you are one of the few people who’ve heard of TUTAC, there’s a simulator in Python. I was frankly surprised anyone else remembered this one, but there’s apparently at least two of us!

[Donald Knuth] wrote what would be the set of books for aspiring programmers of the day. The first volume from 1968 introduced MIX, a made-up machine that is a bit more modern than TUTAC. Because it was a widely-used book, many people learned Mix. There are quite a few Mix emulators today, including a GNU program.

The MIX architecture is a bit more modern, but not modern enough. [Knuth] proposed MMIX to have a modern RISC architecture. In addition to emulators, there is at least one contemporary FPGA implementation of MMIX, so it really doesn’t qualify for this list.

MIX can use binary or decimal numbers but didn’t use a full 8-bit byte which means code that can work in binary or decimal can’t store numbers larger than 63 in a byte. There are nine registers and a fairly small instruction set. Like TUTAC, MIX programs often modify themselves, especially to return from subroutines, since the architecture doesn’t include a stack.

As an interesting point of trivia, MIX isn’t an acronym, but a Roman numeral. MIX is 1009 and [Knuth] averaged the model numbers of common computers of the day to arrive at that number.

We’ve talked about Blue before. It had a slightly different purpose than TUTAC and Mix. As part of [Caxton Foster’s] 1970 book about CPU design, it was really a model for how to build a CPU out of logic gates. However, it did have to be programmed and had an instruction set reminiscent of a DEC or HP machine of that era.

There is at least one software version of Blue out there and my own implementation in FPGA. I’m particularly fond of the front panel design (see video).

My version of Blue is enhanced in several important ways. By default, the instruction set is pretty rudimentary and the machine cycles accounted for things like writing data back to core memory; reading core was destructive, so this was necessary. As far as I can tell, no one built Blue at the time of the book’s common usage, because there was at least one mistake in the schematics and there were several optimizations easily possible.

Blue is also not an acronym but was named for the color of the imaginary cabinet the nonexistent computer resided in.

Another mid-60’s make-believe computer was the Little Man Computer. [Dr. Stuart Madnick] named it because of the analogy that the CPU was a mail room with a little man inside taking certain actions. There are quite a few simulators for it today and even one that uses a spreadsheet. 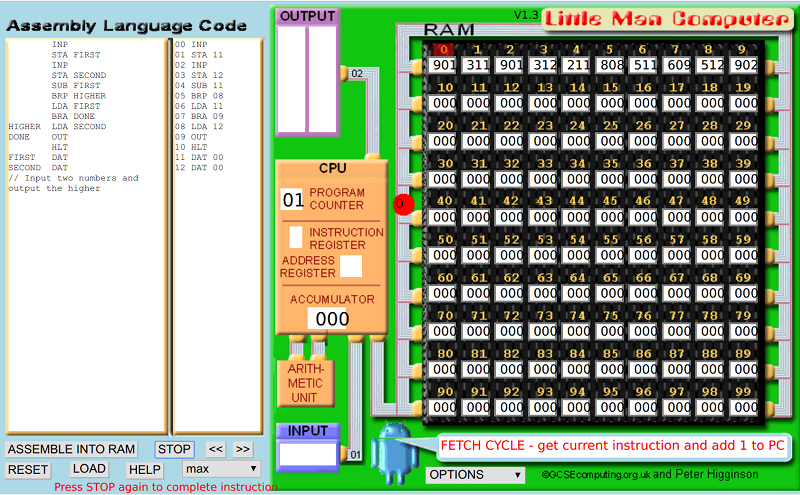 If you are a dyed-in-the-wool computer type, it is hard to remember that there had to be a time that you didn’t understand how data passed from memory to an execution unit to an arithmetic unit and then on to more storage. The little man analogy helps and many of the modern simulators animate the data flow which can be very helpful.

The instruction set is very minimal — just ten instructions in most variations — yet you can write some significant programs. There’s the first of a series of tutorials in the video below. 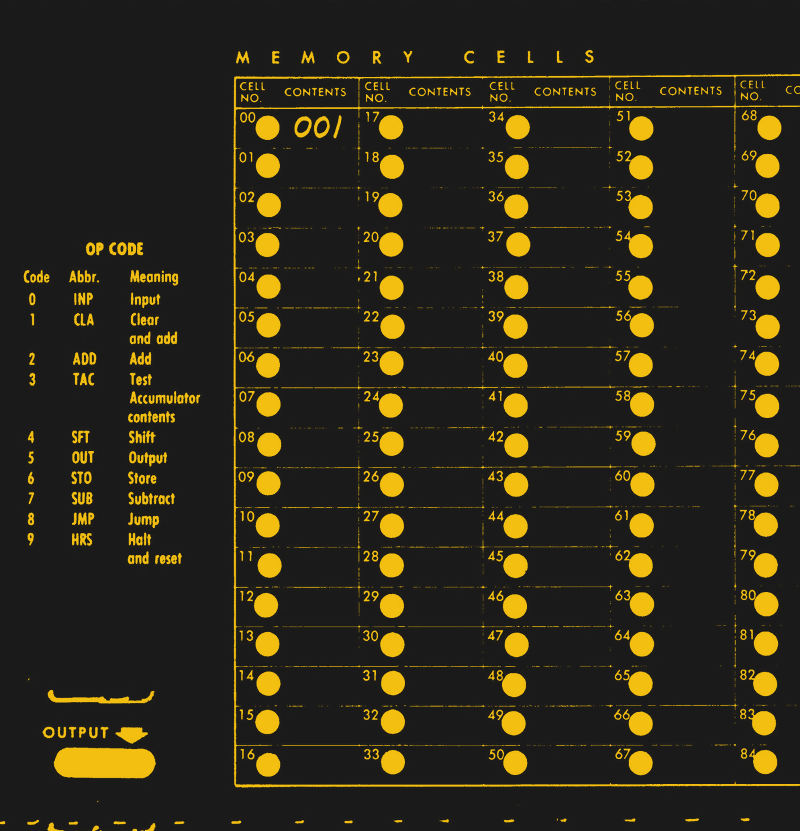 CARDIAC (CARDboard Illustrative Aid to Computation) from Bell Labs was the least imaginary computer on this list. Aimed at high school students in the late 1960s, CARDIAC was a computer made from cardboard. You assembled it and used a pencil to execute programs, moving data from different registers. Like Little Man, CARDIAC has only ten instructions.

I’ve done an FPGA version of CARDIAC as well, and there are emulators including offline versions and this online one. I even wrote a spreadsheet version of CARDIAC, inspired by a similar project for Little Man.

CARDIAC was highly simplified and more like TUTAC with decimal numbers and other things that help a human interpret its programs. For example, there are only ten instructions. You can see an overview of CARDIAC in the video.

You can sometimes buy CARDIAC from new old stock or you can print your own using these scans or this recreated version.

Other than a trip down memory lane, what’s the value to all this? I think Hackaday readers might be a bit jaded. I would guess nearly all regular Hackaday readers understand what’s going on inside a computer to a fair approximation. But if you are just learning, that was often a hard thing to get into your head. But if you learned on these kinds of computers or using real computers at a low level, you had to figure it out or give up.

Today, you can create all sorts of great stuff by just stringing together high-level components and gluing it all together with languages that insulate you from minutiae like how the computer stores numbers, does indexing, computes effective addresses, and handles calls and returns. For productivity, that’s a good thing.

In the movie The Karate Kid (the old original one; I haven’t seen the new one), the instructor has the student do seemingly mundane tasks that later translated into martial art skills. “Wax on… wax off.” Maybe struggling to pretend to be a computer ought to be part of everyone’s learning experience.

31 thoughts on “Computers That Never Were”