We love to pretend like our components are perfect. Resistors don’t have capacitance or inductance. Wires conduct electricity perfectly. The reality, though, is far from this. It is easy to realize that wire will have some small resistance. For the kind of wire lengths you usually encounter, ignoring it is acceptable. If you start running lots of wire or you are carrying a lot of current, you might need to worry about it. Really long wires also take some time to get a signal from one end to the other, but you have to have a very long wire to really worry about that. However, all wires behave strangely as frequency goes up.

Of course there’s the issue of the wire becoming a significant part of the signal’s wavelength and there’s always parasitic capacitance and inductance. But the odd effect I’m thinking of is the so-called skin effect, first described by [Horace Lamb] in 1883. [Lamb] was working with spherical conductors, but [Oliver Heaviside] generalized it in 1885.

Put simply, when a wire is carrying AC, the current will tend to avoid traveling in the center of the wire. At low frequencies, the effect is minimal, but as the frequency rises, the area in the center that isn’t carrying current gets larger. At 60 Hz, for example, the skin depth for copper wire — the depth where the current falls below 1/e of the value near the surface — is about 0.33 inches. Wire you are likely to use at that frequency has a diameter less than that, so the effect is minimal.

However, consider a 20 kHz signal — a little high for audio unless you are a kid with good ears. The depth becomes about 0.018 inches. So wire bigger than 0.036 inches in diameter will start losing effective wire size. For a 12-gauge wire with a diameter of 0.093 inches, that means about 25% of the current-handling capacity is lost. When you get to RF and microwave frequencies, only the thinnest skin is carrying significant current. At 6 MHz, for example, copper wire has a skin depth of about 0.001 inches. At 1 GHz, you are down to about 0.000081 inches. You can see this (not to scale) in the accompanying image. At DC, all three zones of the wire carry current. At a higher frequency, only the outer two zones carry significant current. At higher frequencies, only the outer zone is really carrying electrons.

There are a few practical issues to think about. Manufacturers that create cables for high-frequency use spend a lot of time perfecting the surface of the wire since a small imperfection on the surface that isn’t significant to the entire diameter of the wire might be a very important part of the current-handling capacity at a high frequency. 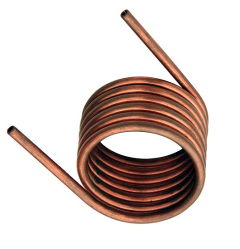 Cables that are copper clad — that is, that have a steel core and a copper surface — will conduct DC differently than AC at the design frequency. Some very high power applications save weight and cost by using hollow tubes instead of solid conductors. This is very common in transmitting coils that use what appears to be copper plumbing tubes. Electric power stations often use tube conductors, also, and benefit from the ability of a tube to stretch across a long distance without as much support as a heavier wire. Sometimes these tubes are silver plated since the plating will carry most of the current and silver is a good conductor but relatively expensive.

To mitigate skin effect, you can use litz wire for frequencies up to about 1 MHz. This is wire woven from many separate, insulated conductors. In addition to providing multiple “skins” for the current to flow, the weaving follows certain patterns to minimize the proximity effect between the wires. If you’ve ever taken apart an old AM radio with a ferrite rod antenna inside, you’ve probably seen litz wire as most of those antennas employ litz windings. Carbon nanotube threads can also work and are not as limited in frequency.

Another place this shows up is in welding rods. An iron rod will work fine for welding at DC, but not for high-frequency welding. The reduced current-handling capacity will cause the welding power to dissipate in heat throughout the rod instead of causing an arc.

The theory behind skin effect is that the change in current causes a change in magnetic field and that generates a reverse voltage (“back EMF”) in the wire. This reverse is strongest in the center of the wire and it forces the electrons away from the center. This is the same effect, by the way, that causes metals to reflect electromagnetic waves.

There is a complex formula for the skin depth that depends on the material’s resistivity, magnetic permeability, and other exotic values. However, as a rule of thumb, you can ignore the skin effect when the frequency is at or below 124 divided by the square of the wire diameter in thousandths of an inch. Beyond that point, assume resistance will increase about 3.2 times for every 10X increase in frequency.

If you really want to look at the hairy math, you might enjoy the video below.

Most of the time, you won’t care much about skin effect. That’s what makes it so insidious. We all know batteries, for example, don’t behave like ideal voltage sources and so we work around it. But wires are pretty good, until they aren’t. Long wires, high frequencies, and high currents can all conspire to make the pretty schematic an ugly circuit. Skin effect is just one of the reasons wires don’t behave like we wish they would.