On Saturday, the Hackaday Community from across Ireland and other parts of Europe poured into the performance hall at Dublin’s Project Arts Centre for a massive collection of talks. From rediscovering century’s old technology, to cutting edge research projects, we heard talks from dozens of attendees on the technology that is interesting them most right now.

Choosing what to share about last weekend’s Uncon has been a particularly taxing process. So many and varied were the projects presented, and such was their high standard, that a writer faces a significant challenge to fit them into a single report. But we’ll give it a try. Read on for highlights of what was a weekend we will remember forever.

From Wearables to Lab-Grown Eyeballs

Dublin by early April has lost some of winter’s chill, but the sun hadn’t regained control enough for the populace to have shed their coats and boots. It was in a slightly damp Temple Bar then that the Hackaday faithful convened at the Project Arts Centre, temporarily forsaking for us its role as one of Ireland’s most cutting-edge contemporary performing arts venues. We’d spent the previous day rounding up what seemed like Ireland’s entire stock of snack food to keep everyone happy, so it was into the upstairs performance hall for the day’s festivities. After putting in a talk topic and stopping by the swag table for goodies from our sponsor, DesignSpark, we all packed into the hall and began the Uncon.

First to brave the floor was [Rachel “Konichiwakitty” Wong], who started by talking about her interest in and flair for wearable electronics applied to fashion. This is not however what she does for a living, and she soon switched from the kawaii to the everyday work of a stem cell research scientist. This section of her talk was entitled “The Future Of Medicine, stem cells, tissue engineering, off-the-shelf pick-n-mix organs”.  Because of the work being done by people like her our hospitals may one day be able to prescribe custom 3D-printed organs for their patients, and her talk was a fascinating overview of that field for those of us who can not grow eyeball tissue on our benches.

There followed the exciting Unconference format, in which attendees were scheduled on-the-fly in four talk sessions throughout the day. Each deliver a seven-minute presentation and although it’s not compulsory to give an Unconference talk, there were definitely more than enough people wanting to give it a go. It’s impossible to mention them all in a single Hackaday piece, but here follows a selection of the many that caught our eye.

A couple of 3D sensing projects made it to the event, the first from [Alex Jaeger] who is a postgrad student at UCC Cork. His project is a very impressive 3D tracking system intended for medical sensors that relies on a probe sensing the different magnetic fields from an array of coils on a large PCB. Surprisingly the processing for this task came from a mundane part, at its heart was a Teensy 3.2.

A little later in the day [Eoin] showed us his solution to thirst in a virtual reality environment, which though it had the essential yet mildly humorous project of bringing a pint of beer into a VR world complete with level sensor, provided an excellent introduction to real-world sensing for VR environments.

We Hackaday staffers and our colleagues join in the fun too. [Sophi Kravitz] described her indoor blimp. “Like a drone that won’t take your head off”. It uses party balloons to stay in the air, and its OSH Park PCB with motors, electronics, and battery has to adhere to an extremely tight weight restriction for it to be a success. Then there was TOG Hackerspace member and prolific Tindie seller [Robert Fitzsimons], who brought along his constellation viewing parasol, upon the inside of which was projected a map of the night sky that aligned with where it was pointed.

Marc rode his electric conversion to the Uncon. Here’s the hub motor!

Dublin is not the most crowded city in the world, but like any capital of a nation it suffers from some traffic congestion. [Marc Evers] was on hand with his personal transport, an electric motorcycle using a Suzuki RF frame. His talk was particularly interesting, because it took us through all stages of its evolution, including some heroic metalwork partitioning off the RF’s engine sump from its gearbox in an effort to keep the oil from a motor.

q3k hacking the Zynq chip on an oscilloscope

Radomir takes DIY to his slides too!

Hackaday.io community stalwart [Radomir Dopieralski] had come over from Switzerland to talk about the most efficient and quick ways for a microcontroller to talk to a display. Many of us will have driven an OLED or LCD, but how many of us have done so in an application where video-speed refresh rates are required.

[Serge ‘q3k’ Bazanski] showed us the insides of a modern budget digital oscilloscope, and made the point that since as we are probably all aware that it is a Linux computer with attached DSP, it is entirely possible to roll your own Linux distribution for it to create a far more capable instrument. 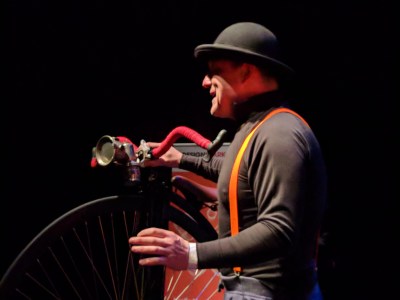 The extremely entertaining [James Twomey] rode into this talk on a penny-farthing bicycle, restricting himself to century-old technology by describing a crystal set radio and a carbide lamp. He was also good enough to explain the trick behind those stage magic ropes that appear seamless but detach into multiple shorter ropes.

[Beth Flanagan] has a background in the utility industry among her many other accomplishments, and revealed some frightening information on the legion insecurities of the smart meters used by utility companies across the USA. She did say that her research dates back a few years and the utilities were aware of the issues, but expressed a lack of confidence that the holes might have been plugged. We’re not suggesting you cower in your cellar with five years worth of canned beans to see you through the Apocalypse just yet, but you couldn’t have come away from her talk without at least a bit of concern.

We’ve tackled the issue of turning private electronic projects into a business before here, so it was interesting to hear [Marc Murphy] talk about producing thousands of boards after his crowdfunding was a success. They wore out a 3D printer, producing parts.

The cars of the future will talk to each other, and there is already a specification and frequency allocation set aside for the WiFi-like protocol that they will use. [Bastian Bloessl] told us about OpenC2X, a software distribution turning a commodity home wireless router into a powerful platform for experimenting with the inter-vehicle wireless networking standard ETSI ITS-G5.

Like quite a few other parts of the world, Ireland is in the midst of an out-of-control housing crisis. [Mark Gaffney] set it out for the audience, and described something of the restrictive Irish building laws. A lot of readers will be familiar with an environment in which having any sort of home is out of reach for all but the very rich or the very lucky. The solution he described involved using redundant freight containers as building blocks for modular portable homes, something which has been tried on a small scale in more than one place on the island of Ireland.

A Fantastic Day of Community

Coffee helped us all recharge during the long day of talks.

Radomir shows of his handheld gaming hardware to q3k

Stickers and there giveaways.

This was Hackaday’s first visit to Ireland, and it was especially pleasing to see such a good turn-out from both the Irish hardware community and from that of the other European countries. These are long days, and there were still a ton of people there to the very end who then stayed long into the night at the Pub. We supplied coffee, tea, snacks, and a dinner, and everyone who showed up supplied the entertainment. From dozens of talk, to hardware project demoed during the break, there was something interesting at every turn. Thank you!

We are indebted to DesignSpark (brought to you by RS) for being the exclusive sponsor of the Hackaday Dublin Unconference. Several members of the DesignSpark crew came to the event to join in throughout the day. Thank you!

The Project Arts Centre staff ensured that the day ran extremely smoothly, with excellent AV in the lecture hall and wonderful service in the bar/meeting areas for each break. We found Dublin to be an excellent city in which to hold an event, we hope to get back and do it again some day!

7 thoughts on “Dublin Unconference Roundup: The Topics That Are Hot Right Now”