We like to think that all these new voice-controlled gadgets like our cell phones, Google Home, Amazon Echo, and all that is the pinnacle of new technology. Enabled by the latest deep learning algorithms, voice-controlled hardware was the stuff of science fiction back in the 1961s, right? Not really. Turns out in around 1960, Ideal sold Robot Commando, a kid’s toy robot that featured voice control.

Well, sort of. If you look at the ad in the video below, you’ll see that a kid is causing the robot to move and fire missiles by issuing commands into a microphone. How did some toy company pull this off in 1961?

Watch the video below carefully. The eyes are on their own motor and just move on their own. The drive train and the missile launchers are subject to the voice control. If you can’t get the scale from the video, the robot stood an impressive 19 inches tall. 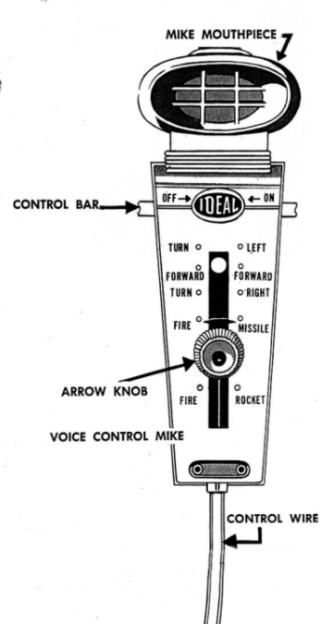 The remote has a rotary switch (marked “arrow knob” in the instruction booklet) and a thick cable (control wire) coming out of it and connecting to the robot. Turns out the wire isn’t a wire at all. It was a Bowden cable. This is the original kind of Bowden cable like you find on a bicycle, not a 3D printing feed mechanism.

Moving the control pulls the Bowden cable and engages different mechanisms inside the robot. You can see the mechanism if you look at the robot’s patent. The robot also had the 3 D cell batteries inside of it, so there was no battery in the remote.

There was also, interestingly, no microphone. Instead, there was a metal contact that the air pressure from your breath would close to power up the robot’s motors. You’ll notice a “control bar” just under the faux microphone. In the on position, the first breath into the mic will close the contact. It will remain closed until you push the bar to the off position. So issuing multiple voice commands also requires manipulating that control bar between each command.

If you read the robot’s instructions and troubleshooting guide, you’ll see that you are supposed to blow out the first letter as in “FFFForward!” to get the air pressure required.

There’s quite a collector community for these robots and the price of one in working order can be quite high. Apparently, there is a squeaker mechanism that made a unique sound using a latex rubber ball. Over the years, these harden, but they can be replaced as you can see in the video, below.

You’ll notice in the video, the voice command is just a single puff of air about 10 seconds in. Once activated, you don’t have to do anything else as long as the control rod stays on.

Sure, it is a hack. It isn’t real voice control at all. But in 1961, if you were ten years old, it sure seemed as cool as an Amazon Echo does today.

The toy, by the way, was a product of Marvin Glass’ company, Marvin Glass and Associates. This is the same outfit that made Rock ‘Em Sock ‘Em Robots, Mystery Date, Operation, Time Bomb, and Lite Brite, among others. Glass was, apparently, more the marketing muscle, so not all of these toys came from the same actual engineers, but it is still impressive that one company turned out so many iconic toys.

To us, though, it seems like an object lesson in simplifying engineering. If you were building Robot Commando today, you’d load it down with a Raspberry Pi running Tensor Flow to do voice recognition and there would be a half-dozen servo motors and at least one other motor for the drive train. All of which, Glass’ team showed us, is completely unnecessary.