Faggin was born in 1941 in Vicenza, Italy. From an early age, he formed an interest in technology, even attending a technical high school.

After graduating at age 19 in 1961, he got a short-term job at the Olivetti Electronics Laboratory. There he worked on a small experimental digital transistor computer with a 4096 word, 12-bit magnetic core memory and an approximately 1000 logic gate CPU. After his boss had a serious car accident, Faggin took over as project leader. The job was a great learning experience for his future career.

In 1967 he started work at SGS-Fairchild, now STMicroelectronics, in Italy. There he developed their first MOS (metal-oxide-semiconductor) silicon gate technology (SGT) and their first two commercial MOS ICs. They then sent him to Silicon Valley in California to work at Fairchild Semiconductor in 1968.

During the 1960s, logic for ICs was largely done using TTL (Transistor-Transistor Logic). The two ‘T’s refer to using bipolar junction transistors for the logic followed by one or more transistors for the amplification. TTL was fast but took a lot of room, restricting how much could fit into an IC. TTL microprocessors also consumed a lot of power.

On the other hand, ICs containing MOSFETs had manufacturing problems that lead to inconsistent and variable speeds as well as lower speeds than was theoretically possible. If those problems could be solved then MOS would be a good substitute for TTL on ICs since more could be crammed into a smaller space. MOSFETs also required far less power.

However, the gate mask would inevitably be misaligned in relation to the source and drain masks. The workaround for this misalignment was to make the thin-oxide region large enough to ensure that it overlapped both the source and drain. But this led to gate-to-source and gate-to-drain parasitic capacitance which was both large and variable and was the source of the speed problems.

Faggin and and the rest of his team at Fairchild worked on these problems between 1966 and 1968. Part of the solution was to define the gate electrode first and then use that as a mask to define the source and gate regions, minimizing the parasitic capacitances. This was called the self-aligned gate method. However, the process for making self-aligned gates raised issues with using aluminum for the gate electrode. This was solved by switching to amorphous silicon instead. This self-aligned gate solution had been worked on but not to the point where ICs could be manufactured for commercial purposes.

In 1968, Faggin was put in charge of developing Fairchild’s self-aligned gate MOS process technology. He first worked on a precision etching solution for the amorphous silicon gate and then created the process architecture and steps for fabricating the ICs. He also invented buried contacts, a technique which further increased the density through the use of an additional layer making direct ohmic connections between the polysilicon gate and the junctions.

These techniques became the basis of Fairchild’s silicon gate technology (SGT), which was widely used by industry from then on.

Faggin went on to make the first silicon-gate IC, the Fairchild 3708. This was a replacement for the 3705, a metal-gate IC implementing an 8-bit analog multiplexor with decoding logic and one which they had trouble making due to strict requirements. During its development, he further refined the process by using phosphorus gettering to soak up impurities and by substituting the vacuum-evaporated amorphous silicon with polycrystalline silicon applied using vapor-phase deposition.

The resulting SGT meant more components could fit on the IC than with TTL and power requirements were lower. It also gave a three to five times speed improvement over the previous MOS technology.

Making The First Microprocessors At Intel

Faggin left Fairchild to join the two-year-old Intel in 1970 in order to do the chip design for the MCS-4 (Micro Computer System) project. The goal of the MCS-4 was to produce four chips, initially for use in a calculator.

One of those chips, the 4004, became the first commercially available microprocessor. The SGT which he’d developed at Fairchild allowed him to fit everything onto a single chip. You can read all the details of the steps and missteps toward that invention in our article all about it. Suffice it to say that he succeeded and by March 1971, all four-chips were fully functional.

Faggin’s design methodology was then used for all the early Intel microprocessors. That included the 8-bit 8008 introduced in 1972 and the 4040, an improved version of the 4004 in 1974, wherein Faggin took a supervisory role.

Meanwhile, Faggin and Masatoshi Shima, who also worked on the 4004, both developed the design for the 8080. It was released in 1974 and was the first high-performance 8-bit microprocessor. 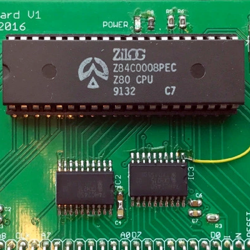 In 1974, Faggin left Intel to co-found Zilog with Ralph Ungermann to focus on making microprocessors. There he co-designed the Z80 with Shima, who joined him from Intel. The Z80 was software compatible with the 8080 but was faster and had double the number of registers and instructions.

The Z80 went on to be one of the most popular CPUs for home computers up until the mid-1980s, typically running the CP/M OS. Some notable computers were the Heathkit H89, the Osborne 1, the Kaypro series, a number of TRS-80s, and some of the Timex/Sinclair computers. The Commodore 128 used one alongside the 8502 for CP/M compatibility and a number of computers could use it as an add-on. My own experience with it was through the Dy4.

This is a CPU which no doubt many Hackaday readers will have fond memories of and still build computers around to this day, one such example being this Z80 Raspberry Pi look-alike.

The Z80, as well as the Z8 microcontroller conceived of by Faggin are still in production today.

After leaving Zilog, in 1984, Faggin created his second startup, Cygnet Technologies, Inc. There he conceived of the Communication CoSystem, a device which sat between a computer and a phone line and allowed transmission and receipt of both voice and data during the same session.

In 1986 he co-founded Synaptics along with Carver Mead and became CEO. Initially, they did R&D in artificial neural networks and in 1991, produced the I1000, the first single-chip optical character recognizer. In 1994 they introduced the touchpad, followed by early touchscreens.

Between 2003 and 2008, Faggin was president and CEO of Foveon where he redirected their business into image sensors.

Faggin received many awards and prizes including the Marconi Prize, the Kyoto Prize for Advanced Technology, Fellow of the Computer History Museum, and the 2009 National Medal of Technology and Innovation given to him by President Barack Obama. In 1996 he was inducted into the National Inventor’s Hall of Fame for co-inventing the microprocessor.

In 2011 he and his wife founded the Federico and Elvia Faggin Foundation, a non-profit organization supporting research into consciousness through theoretical and experimental research, an interest he gained from his time at Synaptics. His work with the Foundation is now his full-time activity.

He still lives in Silicon Valley, California where he and his wife moved to from Italy in 1968. A fitting home for the silicon man.