Breaking Down The Solution

One of the first steps in engineering a solution is to break it down into smaller steps. Any conversation consists of a back-and-forth between two people, or a person and a chunk of silicon in our case.

Let’s say we want to create a bot which can order a pizza for us over the phone. The pizza place first says something to us. Some software then converts that speech to text or breaks it down into some other useful form. More software then formulates a response. And lastly, text-to-speech software or pre-recorded sound bites reply to the pizza place through a speaker into the phone.

The first half of the solution falls under the purview of natural language processing, at least part of which involves converting speech to a form which software can easily understand.

While there are plenty of open software options for converting text to speech, there aren’t as many for going the other way, from speech to text. They’re also typically in the form of libraries, which is fine for our use. Examples of open ones are CMU Sphinx, Julius, and Kaldi.

More recently, Mozilla has been working one called DeepSpeech which uses TensorFlow and deep learning. We’ve seen it used once so far when [Michael Sheldon] adapted it to convert speech to text which he then injects into X applications.

Once you’ve converted the speech to text, what do you do with it?

In our diagram, the human at the pizza place asked us “Will that be all?”. This could have been worded any number of other ways, for example: “Is that it?”, “That’s all?”. 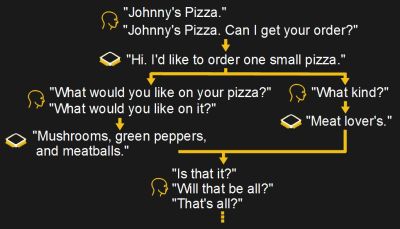 One way to handle all these possibilities is to write the formulate-a-response code by throwing together a bunch of if-then-else statements, or perhaps write up a parser backed by some tables. If the conversation is expected to be structured then you can create a decision tree and have the code use that as a guide.

AIML (Artificial Intelligence Markup Language) makes that approach easier. AIML was created between 1995 and 2002 by Richard Wallace and has been the basis for a number of chatbots since, including an award-winning one called A.L.I.C.E. Since 2013, the A.L.I.C.E. foundation has been working on a specification for AIML 2.0.

With AIML, you fill an XML file with all the possible things the pizza place could say. The number of them can be minimized using patterns such as “Hi *”, but the pattern language in AIML is limited. It also allows you to provide responses and to limit the conversation to specific topics as they arise. And among its many other features, it has the ability to learn by writing novel things to a file.

For starting out with AIML, see the docs at pandorabots.com. There is also a relatively old interpreter called ProgramAB.

This video shows AIML in use by an open source InMoov robot.

Much of the process-speech portion of our solution basically involves figuring out the intent of whatever the pizza place is saying, except that if our code is a mass of if-then-else statements or decision tree structures, it might not seem that way. Ultimately, when the pizza place asks in one of its myriad ways if that’s all we’d like to order, we’d like to boil down all the possibilities down to a single, simple intent, “asking_is_that_all”.

Free online services exist which do both the speech recognition and determining the intent and capturing of any data. Wit.ai, owned by Facebook, is one such. Another is DialogFlow, formerly Api.ai and now owned by Google. DialogFlow does charge for some things, but nothing a hacker would need. IBM’s Watson Assistant is also free but has a mix of limits.

While Wit.ai does speech recognition and intent determination, DialogFlow and Watson implement the full decision tree, allowing you to use their UIs to script the whole conversation.

I decided to try out Wit.ai and here’s the resulting conversation, placing an order for a pizza with a fictitious Johnny’s Pizza. Disclosure: No phone call was actually made, but more on that below. Two approaches were taken for speaking to the pizza place. The first used prerecorded speech:

The second approach used Festival text-to-speech software to create the speech on the fly.

In brief, here’s how I did it. First, I wrote up a script with all the possible combinations of things Johnny’s Pizza could say as well as what my bot should respond with. Then I went to Wit.ai and created an App. That involved giving it all the things in my script which Johnny’s Pizza says and for each one, assigning intents and indicating any data which should be reported to my code.

In Wit.ai you actually create entities, of which intents are just one type, but I found my code was easier to write if I made everything an intent. Shown here is a snapshot of some of the expressions, i.e. the things the pizza place might say. I’ve expanded the “Will that be all?” one to show the intent entity with a value of “asking_is_that_all”, which is what I’ll look for in my code. The expression above it and the one below it share that same entity so for any of them my code only has to look for “asking_is_that_all”.

After that, it was just a matter of writing some Python code on my Raspberry Pi based on their docs and example code on their Github. I have an amplifier (a noisy DIY one) and speaker attached to the Pi. I recorded a separate sound clip for each part of the conversation and saved them in individual .wav files. For the version where I used prerecorded speech for the bot’s side too, I deepened the bot’s voice since my voice was used for both sides of the conversation.

In the code, I iterate through the sound clips for the pizza place as if I’d just received them from a phone, sending them one at a time to Wit.ai. Wit.ai does the speech recognition and analysis and returns the intent and data. I also play the clip to the speaker. Then I use the intent to figure out which of the bot’s clips to play in response or which text to convert to speech, depending on which approach I’m taking for the bot’s side. What you hear above is the resulting conversation just as I heard it from the Pi’s speaker.

The code can be found on our Github.

The Ultimate: How Google Duplex AI Did It

Listen again to the conversations Google’s Duplex AI had and you’ll be astounded at the language produced by the AI. Impressive as that is, more amazing is that there’s no if-then-else or decision tree involved. Instead, all that logic was trained into a neural network using copious amounts of sample phone conversations on hardware we can only dream of (or pay to use through online services). So for now we’ll have to do that part the old school way.

One thing we can do, which would be a great open source project, would be to combine something like DeepSpeech with AIML, producing something more similar to DialogFlow or IBM Watson. Perhaps then ordering a pizza over the phone will become only a matter of pressing a button, or we could hook it up to Alexa and have her initiate it. Of course, we might want to announce that we’re a bot at the start of the call and be alerted to intervene if the conversation goes awry. Or record the conversations for posterity, so that the AIs have something to laugh about in ten years.