Every hacker has dreamt of building their own tank at some point. Or maybe that’s just us. [Peter Sripol] and [Sam Foskuhl] have built one at a scale which is big enough to be rideable, but small enough that neighbors don’t get concerned. 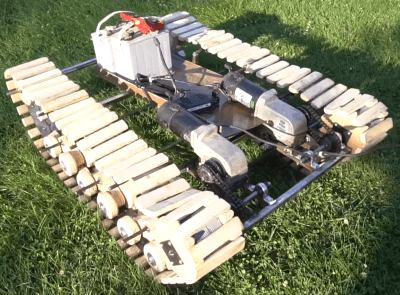 An electric wheelchair is at the heart of the build. After ripping out its internals, the two motors with gearboxes are directly connected to the two tracks, allowing differential steering. Holding everything together is a solid welded steel frame – essential for years of reliable sieging.

The tracks themselves are simple strips of wood, cut and assembled by hand onto a nylon belt. Meanwhile the track wheels and drive assembly are designed in CAD and cut with a CNC router from some plywood, a great choice for adding some precision to the most mechanically challenging part of the build. As always in [Peter]’s videos, a large portion is dedicated to testing – in this case with a rather large array of fireworks. We certainly wouldn’t want to be in his bad books considering his other souped-up weapons.

A small, hacked, novelty electric vehicle? Sounds like it would find some good friends at EMF Camp, especially at the Hacky Racers event.