The Pantorouter is a specific application of a mechanism called a pantograph, which is a general purpose linkage that can be used in two ways: to guide linear motion and to trace patterns while enlarging or reducing them. (The scissor lift is an example of the first use.) It doesn’t take much searching through the Wikipedia entry to see that the Pantorouter is certainly not the first type of machine tool to use this mechanism, and not even the first router to do it. Searching for “pantograph router” on your favorite search engine turns up a bevy of kits, templates, and products to build such a device. But these are typically used for enlarging 2D stencils for fancy lettering and the like. That’s what sets the Pantograph apart; it’s designed for cutting joinery. 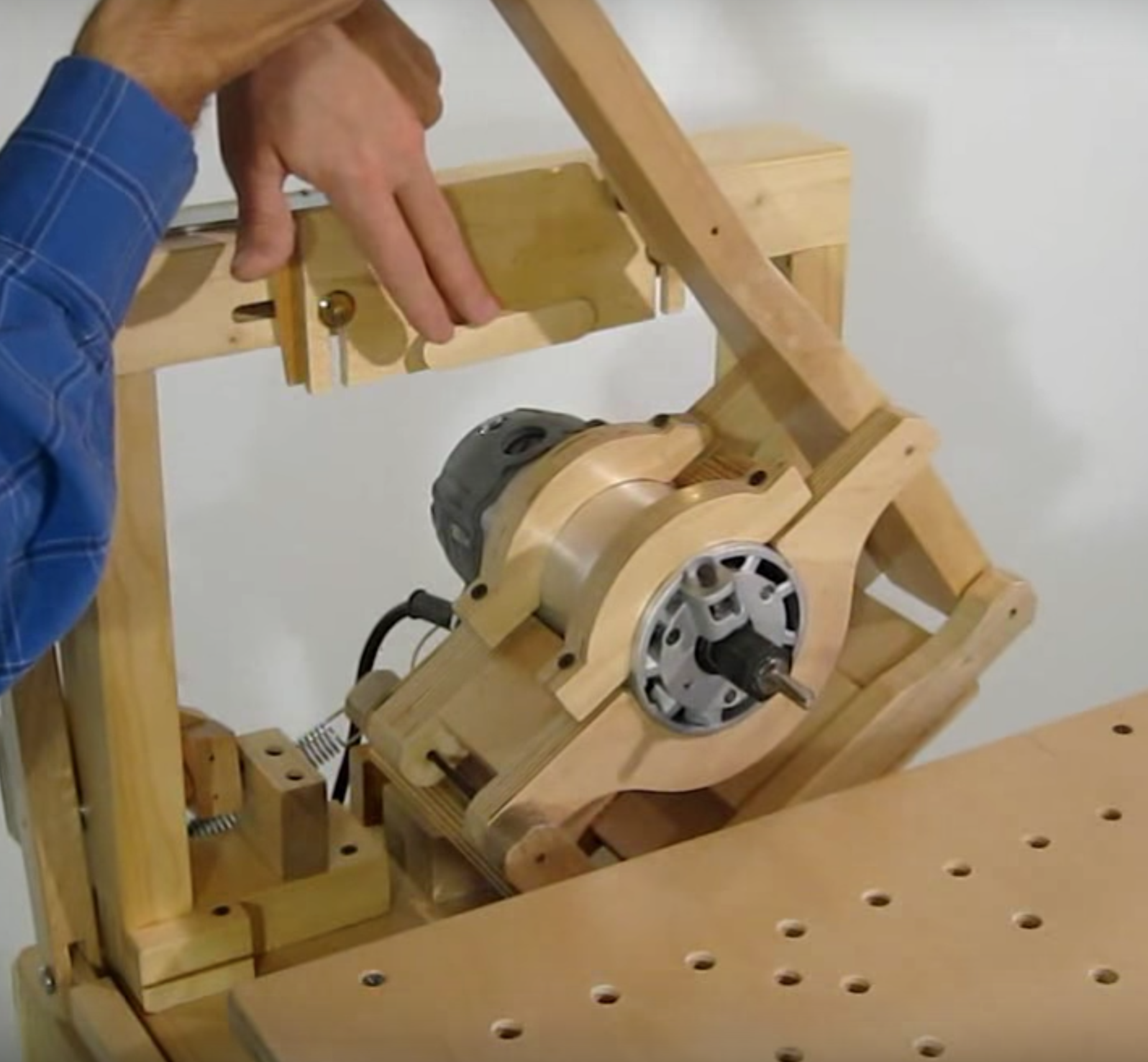 A typical pantograph works by guiding one one node around the perimeter of a shape to enlarge or reduce while another node follows along at a different magnitude. So an operator would guide one part of the mechanism around the template while the toolhead follows. The Pantorouter is fundamentally a pantograph and it works in the same way. The user inserts a template of the shape they want to cut, turns on the router, and guides it through multiple passes removing stock until the stock matches the shape of the template and there is nothing left to cut. Instead of being mounted flat on a surface the Pantorouter’s cutting head stands upright on its edge with the router bit extending parallel to the plane of the spoilboard. Hard to describe but easy to see. Check out the photo and you’ll get it. The template goes between the handle and the router, where [Matthias] is pointing in the photo. This image shows an original Pantorouter with a template for cutting a mortise. As the user moves the handle it guides a bearing along the interior or exterior of the template piece. That part of the assembly is mounted on a sled that is controlled with a second lever, allowing it to be precisely guided in and out to control cut depth. Underneath the bed there are configurable stops to adjust the maximum and minimum depth. The geometry of the original machine is designed with a fixed reduction of one half from template to stock. 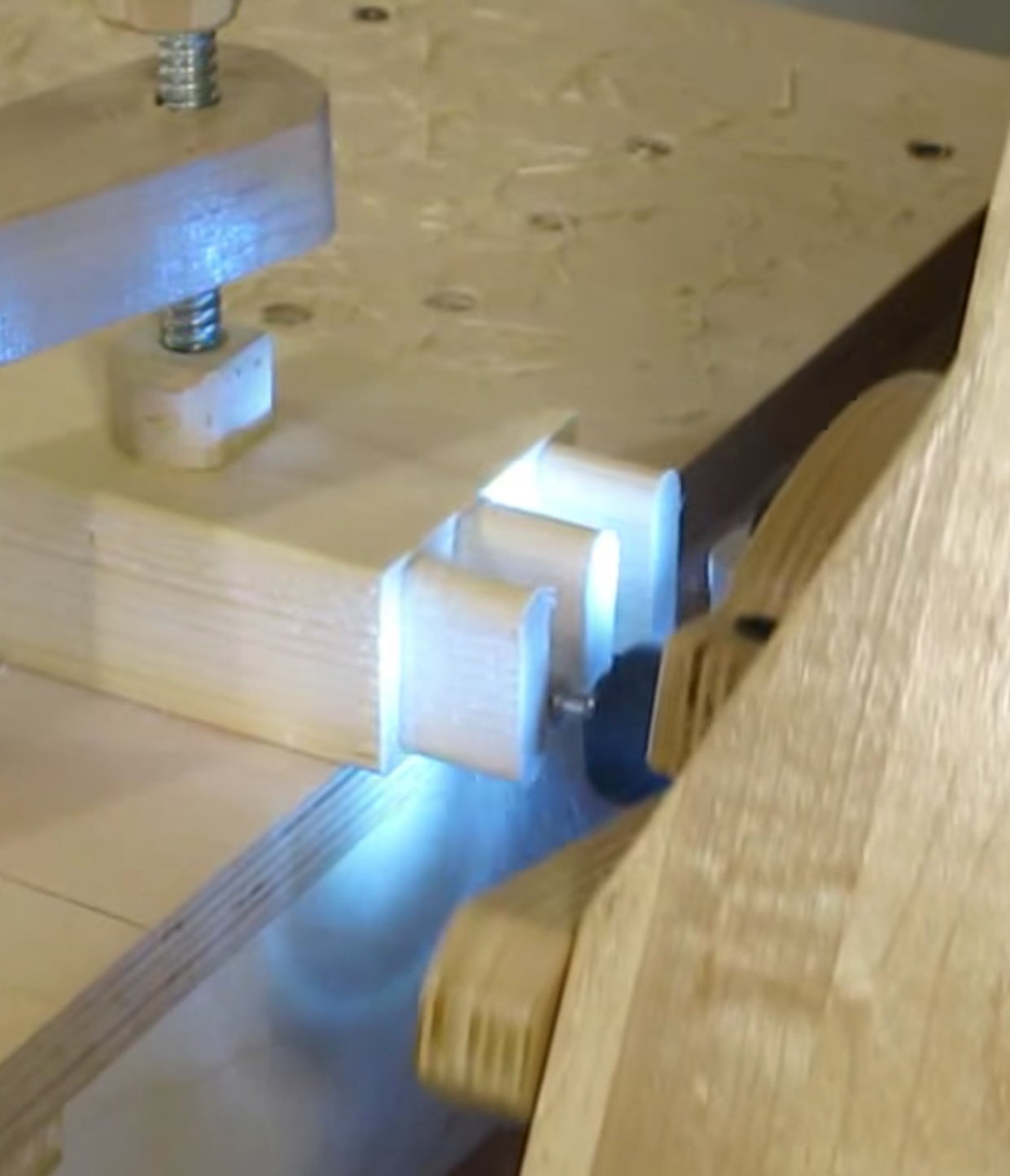 The Pantorouter was originally demonstrated cutting mortise and tenon joints. [Matthias] notes that the easy way to cut a mortise, with a cylindrical bit, leaves a rounded slot. A rectangular tenon will fit into such a void but not tightly, for a perfect fit the tenon must be cut into a matching rounded protrusion. Perfectly cutting a matched mortise and tenon pair is easy with the Panorouter. Once a template pair has been perfected it can be reproduced indefinitely and retain the same exact fit. At that point you don’t even need to measure it! Just clamp a piece of stock and cut. But there’s no reason to stop there. Multiple tenons and mortises? No problem! That’s just a new template which can be reused again and again with a perfect fit every time. Need dowels sticking out the end of your stock? You can cut them on the Panorouter turning the end of the stock into cylindrical protrusions. And because the templates are twice the size of the finished product they are easier to make than it would be to cut such a form at 1:1 scale.

Since the original Pantorouter there have been a few iterations. [Matthias] built an XL version which is a bit larger and designed to use routers easier to find outside of North America. He also has a more traditionally oriented router/pantograph which is better suited to tracing stencils, though it’s also hinged to enable cutting 3D designs. Plans for all are available to build yourself, and some digging turns up some pre-fabricated designed that can be purchased assembled or as kits.

Here is [Matthias]’s original demo video. But if you’re interested check out the rest of the play list for more about what the machine can do.

6 thoughts on “Cool Tools: The Pantorouter Turns Tracing On Its Side”