So you went to a tradeshow and heard about this cool new idea called the Internet Of Things; now it’s time to build an IoT product of your own. You know that to be IoT, your Widget D’lux® has to have a network connection but which to choose?

You could use WiFi or Bluetooth but that would be gauche. Maybe LoRaWAN? All the cool kids are using LoRa for medium or long range wireless these days, but that still requires a base station and Widget D’lux® will be a worldwide phenomenon. Or at least a phenomenon past your bedroom walls. And you know how much user’s hate setting things up. So a cell modem it is! But what do you have to do to legally include one in your product? Well that’s a little complicated.

We’ve talked about government certification testing before (seriously, go read that article. Bob did a great job!) and it’s entirely relevant here but cell modems add a couple layers to that onion. There are a bunch of entry points to this discussion so let’s pick one and dive in.

So what kind of government certification will you need before you can ship your product? There are a few. If you plan to turn your cell radio on the entire device will need to be certified for intentional radiation to make sure that the radios you intend to use are well-behaved (don’t emit too much energy for given frequency bands). If you plan to turn on Widget D’lux® at all than it will also need to be checked for unintentional emissions to make sure there isn’t too much electromagnetic energy you didn’t mean to transmit. If you want to add another radio like Bluetooth or WiFi there’s also multi-radiator certification to look for problems caused by multiple radios operating at once.

Fortunately there are some tricks which might make that process easier. Testing and certification for multiple radiators is only relevant when more than one is on at once. Maybe the application can be adjusted so that you don’t actually need, say, Bluetooth at the same time as the cell connection? Or only turn the WiFi radio on when the cell signal falls below a certain strength and the radio is subsequently disabled? As long as there’s only ever one transmitter on at a time then you shouldn’t need to pursue additional certification. Though if there is ever a case where they can both be on at once it needs to be appropriately certified.

An even more specific exception is using WiFi to gather access ESSID’s and MACs to help with geolocation. Actively scanning for APs might be faster but if you stick to a passive scan the WiFi radio never transmits. No extra certification required. 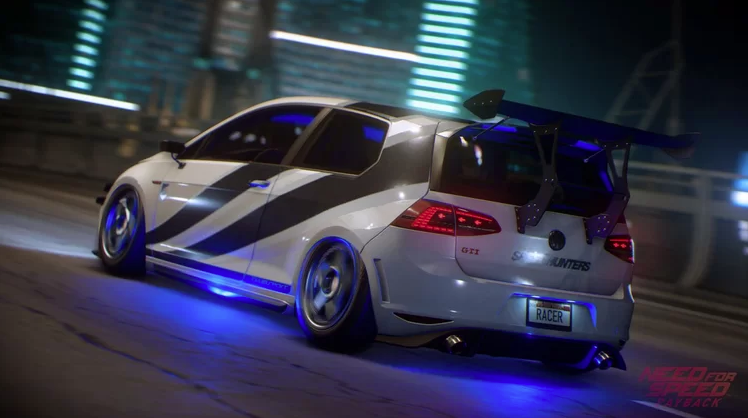 Alternatively some modular certifications (we’ll get to that in a moment) allow you to avoid dual radiator certification if antennas of different radiators are placed far enough apart (here’s an example with a 20cm separation). Specific information about this may be in a given device’s FCC grant like that one. (Note! Talk to your NRTL about this! Reading the linked grant closely makes it unclear what the requirements actually are. At the end of the day the Test Engineer at your lab of choice will have to sign off on your test results so their opinion might be most important)

There is also an entire list of device types which are exempt from certain types of emissions tests. For instance certain kinds of appliances and automotive devices don’t require testing. Though if they have intentional radiators they must still comply with those the relevant laws. So devices like underglow for your very classy body kit probably don’t need to be tested so long as there isn’t a Bluetooth app for configuration.

We won’t go into more detail about how these tests are performed. Again, refer to Bob’s article on FCC testing for more detailed information.

Ok! If that’s not enough for you there are a couple more cellular-specific certifications you’ll need too: PTRCB and/or carrier certification. The FCCs job is to make sure that your device plays nicely with everyone else’s and the airwaves are generally available to be shared. They do not care whether or not your device actually works (though they do care if it breaks due to ESD sensitivity!). The cell carriers on the other hand need to make sure that your device obeys their network specifications so that you don’t cause a general degradation of service.

The end goal here is really carrier certification, which means that the certified device has been tested to work with the specific blend of herbs and spices that, say, Verizon requires. A carrier certification is specific to that network though for many carriers (in the US, AT&T, T-Mobile, and Sprint) getting this certification is actually a superset of the testing done to specifications from a body called the PTRCB. Surprise! The PTRCB was founded by a consortium of carriers to help test and regulate cell devices.

Whew! Still excited to bring Widget D’lux® to the hungry masses? No? But we haven’t even talked about cost and time (tens of thousands of dollars and up to tens of weeks)! Do I hear you begging for an easier answer? That doesn’t sound like much fun, but I guess we can explore other options.

The magic words are “modular certification.” Cell modems come in all shapes and sizes, from raw modems and RF components through development kits designed to plug into a breadboard. In the middle there is a sweet spot where cell modems are available as modules which are designed to be permanently installed in an end device. In their most complete form such modules include all RF related hardware.

Integrating a Cell Modem into a Product

There are a few ways to integrate a cell modem and fortunately they don’t all have the same regulatory burden.

For prototyping and very low volume products gluing a development kit to the rest of a system might be enough to get a system out the door. There are a few options in this space, with Particle’s Electron being probably the best known. This is probably a fine option when starting out but often more consumer/prototype oriented development kits won’t be available in quantity from suppliers, may not be as robust for long term installation, and may not be certified appropriately for use in a commercial device. But that doesn’t mean they’re impossible to use.

As Make noticed the first generation scooters retrofitted by Bird (currently valued at over $2 billion) contain, amazingly, a Particle Electron on their mainboard at the top of the scooter! From the photo it looks like it’s USB and JST battery connector have been removed and the entire daughterboard may be soldered down into the scooter. But hey, I guess a shipping product is the most important thing! 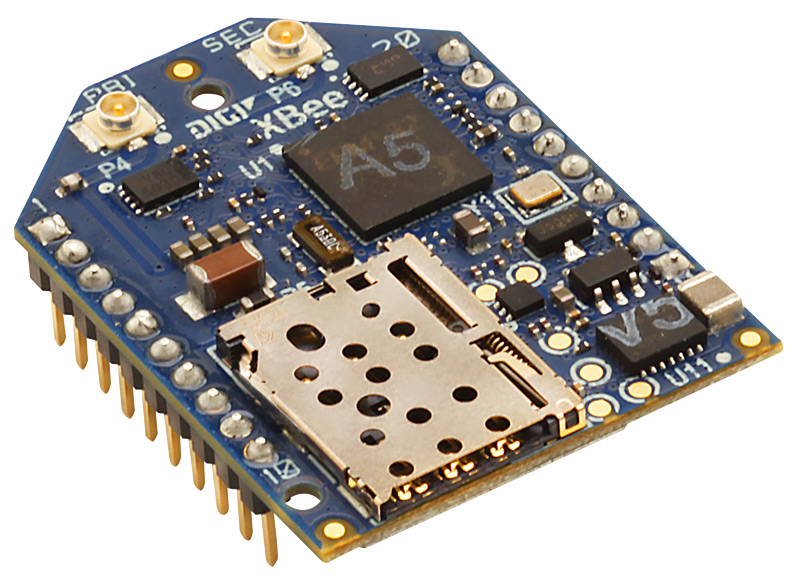 There’s a lot of other text in this article but the one liner explanation of the easiest way to integrate a cell modem into a product is “use a module.” As mentioned above modems are sold packaged with many/most of their RF bits as modules. Whether they use through holes, castellations, or a nasty land grid array, these are designed to be permanently installed in an end product. If you choose one that has the correct certifications (AKA all of the certifications), dropping in a module is the fastest practical way to go to market, though prices will probably be higher than sourcing a bare modem.

What’s inside the module? It depends. Some are just a modem with support circuitry and a standardized mounting pattern. Others include another microcontroller and might be capable enough to be the main application processor for your system. There are a few other handy benefits for going the modular route:

A selection of common module vendors are Particle (they have non devkit options too), Digi, MultiTech, NimbeLink, and Link Labs. 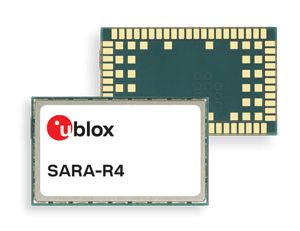 The companies which make and sell cell modems will happily sell them for use in end devices (what do you think is inside the modules?). But by buying a Telit or a u-blox or a Sierra module and dropping it on a board you’ll need to go through most of the arduous certification process. These vendors know how rough that process is and will help you figure out what tests to perform and who to talk to, but it will still be a costly and time consuming process. This complexity is why modular products exist in the first place; it’s is so difficult it’s a complete business.

All that aside using a modem directly will be cheaper than a module and the size can be minimized/customized to your application.

If you were building a very high volume product and really needed unusual features or the lowest possible cost, you could piece together the cell modem yourself. This is by far the most expensive, time consuming, and complex option. All certification would be required.

If you’re doing this for real it should be obvious by now that you’ll need to ask for some help. Expert help. One option is to hire a consultant. But another is to talk to a test lab. Not all labs will be amenable to being a living/breathing FAQ but some will. I’ve found that it’s a good sign when a lab is willing to be helpful, perhaps a useful trait to consider when choosing who to do business with. In the Bay Area there are lots of options. In no particular order I’ve known people to work with TÜV Rheinland, NTS (they had pizza and soda for customers, a big plus), Bay Area Compliance Labs, MET labs, and Cetecom. Ideally the lab you work with will also be the one you certify with.

Ready to bring Widget D’lux® to life? No? You want to go back to ESP8266’s and breadboards in a shoebox? That’s ok, maybe the world doesn’t need another IoT thermometer with targeted advertising.

Note: If it’s not obvious, this should be taken as advice of the casual kind. This is a trail of breadcrumbs leading to larger knowledge… but don’t launch a product based solely on what you read here.