It wasn’t long ago that a gyro — or gyroscope — was an exotic piece of electronics gear. Most of us only saw them as children’s toys that would balance on your finger. That’s changed, though, thanks to microelectronics. Now your game controller, your phone, and your drone all probably use little ICs that are actually three-axis gyroscopes. Ever wonder how they work and what they do? [RCModelReviews] has a video that covers three kinds of gyros: old mechanical gyros, modern MEMS gyros, and even an exotic laser-based gyro. (YouTube, embedded below.)

Gyroscopes allow you to detect orientation by detecting linear forces on a rotating element. They are used in everything from spacecraft to submarines. The device has many origins dating back to antiquity. But the modern gyro showed up around 1800 or so. The children’s toy appeared in 1917 and is still made today.

END_OF_DOCUMENT_TOKEN_TO_BE_REPLACED 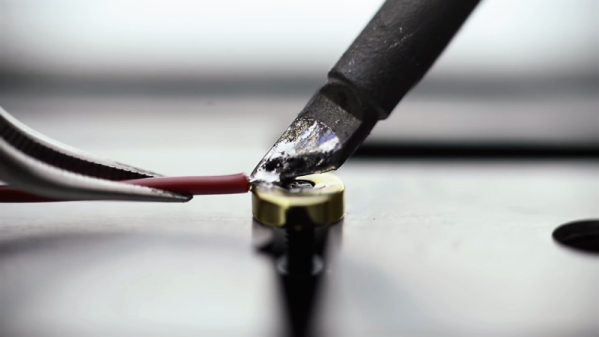 The Apple MagSafe power connector is long gone from their product line, but that doesn’t mean that magnetic connectors aren’t without their charms. It just takes the right application, and finding one might be easier with these homebrew magnetic connectors.

We’ll admit that the application that [Wesley Lee] found for his magnetic connectors is perhaps a little odd. He’s building something called Linobyte, a hybrid art and electronics project that pays homage to computing history with very high-style, interactive core memory modules. The connectors are for the sense wire that is weaved through the eight toroids on each module, to program it with a single byte. Each connector has a 3D-printed boot that holds a small, gold-plated neodymium magnet with the sense wire soldered to it. A socket holds another magnet to the underside of a PCB. The magnet in the boot sticks to the PCB and makes contact with pads, completing the circuit. We know what you’re thinking: heating a magnet past the Curie point is a great way to ruin it. [Wesley] admits that happens, but it just makes the connection a little weaker, which works for his application. The short video below shows how he puts them together.

We can think of a couple of ways these connectors would be useful, and we really like the look of the whole project. It’ll be interesting to see where it goes, but in the meantime, brushing up on how magnets work could be fun. END_OF_DOCUMENT_TOKEN_TO_BE_REPLACED 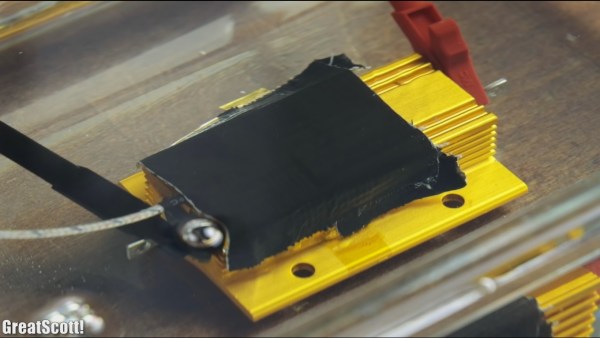 Transformer oil has long served two purposes, cooling and insulating. The large, steel encased transformers we see connected to the electrical grid are filled with transformer oil which is circulated through radiator fins for dumping heat to the surrounding air. In the hacker world, we use transformer oil for cooling RF dummy loads and insulating high voltage components. [GreatScott] decided to do some tests of his own to see just how good it is for cooling circuits. 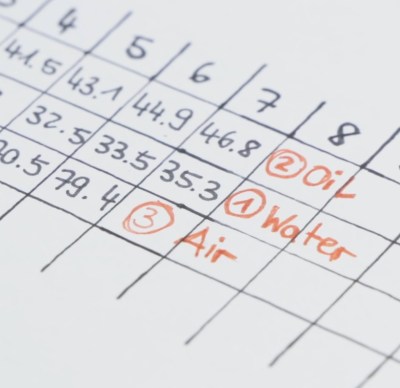 He started with testing canola oil but found that it breaks down from contact with air and becomes rancid. So he purchased some transformer oil. First, testing its suitability for submerging circuits, he found that he couldn’t see any current above his meter’s 0.0 μA limit when applying 15 V no matter how close together he brought his contacts. At 1 cm he got around 2 μA with 230 VAC, likely from parasitic capacitance, for a resistance of 115 Mohm/cm.

Moving on to thermal testing, he purchased a 4.7 ohm, 100 watt, heatsink encased resistor and attached a temperature probe to it with Kapton tape. Submerging it in transformer oil and applying 25 watts through it continuously, he measured a temperature of 46.8°C after seven minutes. The same test with distilled water reached 35.3°C. Water’s heat capacity is 4187 J/kg∙K, not surprisingly much better than the transformer oil’s 2090 J/kg∙K which in turn is twice as good as air’s 1005 J/kg∙K.

He performed a few more experiments but we’ll leave those to his video below.

We’ve run across a number of tests running boards submerged in various oils before. For example, we’ve seen Raspberry Pi’s running in vegetable oil and mineral oil as well as an Arduino running in a non-conductive liquid coolant, all either overclocked or under heavy load.

END_OF_DOCUMENT_TOKEN_TO_BE_REPLACED 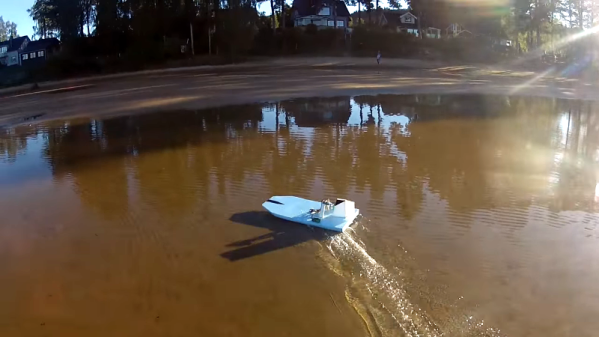 Archer fans and residents of Louisiana will already be familiar with the concept of the airboat. Put a powerful engine running an aircraft prop on a flat-bottomed hull, and you’ve got an excellent way to traverse the marshes of the American South. While a fully-fledged airboat might run you the best part of $100,000, this no-frills radio-controlled version is great fun at a much lower price.

The hull is built on a sheet of foam, which is cheap, readily available, and suitably buoyant for the task. It’s then kitted out with a brushless motor to run the prop and a servo to control the rudder. Lace it up with a radio receiver and speed controller and you’re good to go.

The build could readily be completed in well under a couple of hours, and is a great one to tackle with kids due to its mechanical simplicity. There’s room for extra creativity too – you can always substitute a watermelon if you’re feeling peckish. Video after the break. END_OF_DOCUMENT_TOKEN_TO_BE_REPLACED 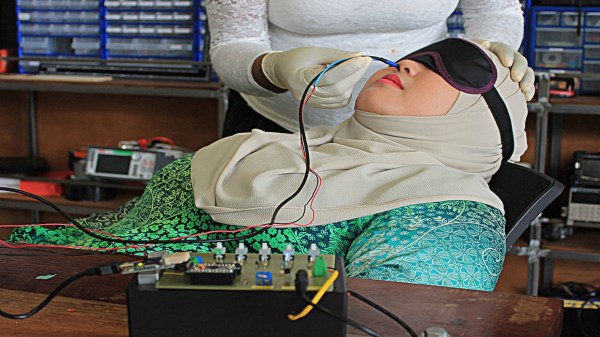 END_OF_DOCUMENT_TOKEN_TO_BE_REPLACED

Dexter isn’t the only robotic arm in town, by any means. But in terms of hobbyist-level robotics, it’s by far the most complete robot arm that we’ve seen, and it includes a couple of design features that make both its positional accuracy and overall usability stand out above the rest. This is a robot arm with many of the bells and whistles of a hundred-thousand dollar robot, but on a couple-thousand dollar budget. END_OF_DOCUMENT_TOKEN_TO_BE_REPLACED 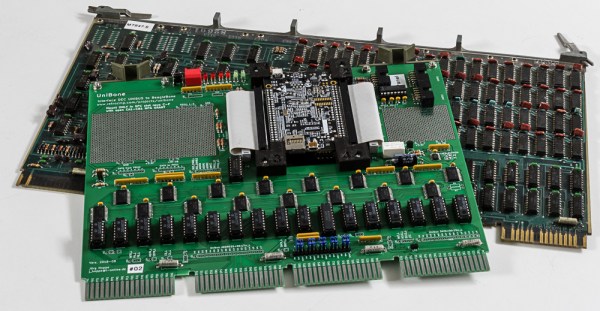 The UNIBUS architecture for DEC’s PDPs and Vaxxen was a stroke of genius. If you wanted more memory in your minicomputer, just add another card. Need a drive? Plug it into the backplane. Of course, with all those weird cards, these old UNIBUS PDPs are hard to keep running. The UniBone is the solution to this problem. It puts Linux on a UNIBUS bridge, allowing this card to serve as a memory emulator, a test console, a disk emulator, or any other hardware you can think of.

The key to this build is the BeagleBone, everyone’s second-favorite single board computer that has one feature the other one doesn’t: PRUs, or a programmable real-time unit, that allows you to blink a lot of pins very, very fast. We’ve seen the BeagleBone be used as Linux in a terminal, as the rest of the computer for an old PDP-10 front panel and as the front end for a PDP-11/03. 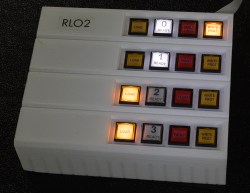 In this build, the Beaglebone’s PRU takes care of interfacing to the UNIBUS backplane, sending everything to a device emulator running as an application. The UniBone can be configured as memory or something boring, but one of these can emulate four RL02 drives, giving a PDP-11 an amazing forty megabytes of storage. The real killer app of this implementation is giving these emulated drives a full complement of glowing buttons for load, ready, fault, and write protect, just like the front of a real RL02 drive. This panel is controlled over the I2C bus on the Beaglebone, and it’s a work of art. Of course, emulating the drive means you can’t use it as the world’s largest thumb drive, but that’s a small price to pay for saving these old computers.