The Early History of Gallium Nitride

You’ve probably got gallium nitride right now in LEDs all around you. Because of the nature of gallium nitride and its wide bandgap, it is idea for optoelectronic applications. What does that mean? First, let’s back up a bit. 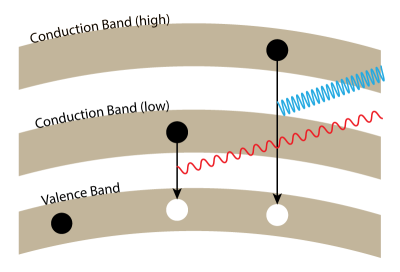 Although infrared and red LEDs were in production by the mid-to-late-60s, it took until the end of the 90s for blue LEDs to make it into consumer goods. The development of the blue LED was based entirely on gallium nitride technology. This innovation was the focus of the 2014 Nobel Prize in physics, and today gallium nitride LEDs are saving us tons of energy.

In the two decades since the development of the first gallium nitride blue LEDs produced by the Nichia Company, there has been loads of research on using gallium nitride for applications other than optoelectronics.  Whether it’s because gallium nitride is just sitting around in a lab, waiting for bored physicists to experiment, or because companies are looking to find more uses for gallium nitride, there are more applications for this semiconductor than ever.

GaN As A Transistor

Beginning in 2009, gallium nitride has been available outside the lab as a replacement for silicon MOSFETs. Because of the high power handling, low power losses, and size reduction, gallium nitride was first used in devices that dumped a lot of current, electric cars included. As with any technology, it eventually makes it into lower-cost items and now gallium nitride can be found in a fantastically small phone charger from Anker. The size of this charger is only possible thanks to the efficiency and power handling capability of gallium nitride MOSFETs. This is highly advanced technology that’s making inroads in consumer electronics in less than a decade.

As if it weren’t enough that the properties of GaN make it perfect for high-power and high-speed transistors, there is another benefit: high temperatures. As any PC gaming enthusiast knows, silicon doesn’t like high temperatures, and this is a problem if you want to explore Mercury, Venus, or the interior of the gas giants. In research funded by NASA’s Hot Operating Temperature Technology (HOTTech) program, P-N junctions fabricated out of gallium nitride were found to operate very well at temperatures of 500 °C.

This fact alone means that gallium nitride transistors will allow computation in environments where silicon simply doesn’t work. The only exploration from the surface of Venus lasted only about two hours until the electronics fried themselves. The research into using gallium nitride as an electronic switch provided more than twenty days of data, and in the end the transistor still worked perfectly.

Right now the research is only in the beginning stages, but gallium nitride could be the basis for post-silicon computation, forming the gates in CPUs and memories on the surface of other planets.

The Technology That You Need To Know, Now

Yes, gallium nitride can make smaller, more powerful power supplies, but it may also be the future of electronics. It’s already the foundation of modern LED lighting, and it could very well be the technology that broadcasts video from the surface of Venus.  It’s a wonder material, and knowing about it now makes you a smarter, better person.

60 thoughts on “The Amazing New World Of Gallium Nitride”