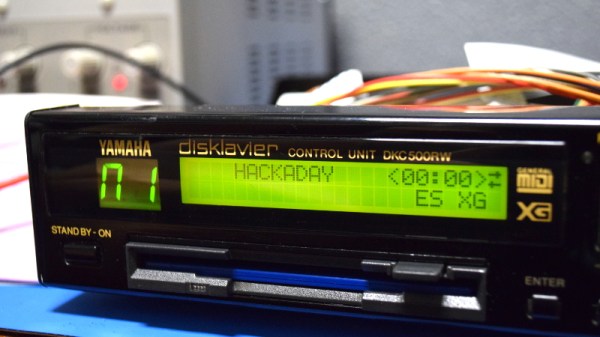 END_OF_DOCUMENT_TOKEN_TO_BE_REPLACED

It’s been a long time coming but [Fran] finally has a DSKY display, a replica of the user interface display found in the Apollo Guidance Computer. The best part? It’s a t-shirt.

This build is a long, long, time in the making first beginning in 2015 when Fran started investigating the DSKY of the Apollo Guidance Computer. At the time, there were reproductions, but honesty they were all terrible. The reproductions used off-the-shelf seven-segment LEDs or light pipes. The real DSKY was a work of art and at the time probably the most complex electroluminescent display ever created. This led [Fran] to a very special trip to the annex of the Air and Space Museum where she was allowed to inspect a real DSKY display. She got all the measurements, and with some non-destructive investigation, she was able to piece together how this very special display was put together.

With that information, [Fran] was able to figure out that this display was a fairly complex series of silk screens. If it’s silk screen, you can put it on a t-shirt, so that’s exactly what [Fran] did. This used a DIY silk screen jig with phosphorescent inks. It’s not an electroluminescent display, but it does glow in the dark.

While this DSKY t-shirt does glow in the dark, that means it’s not an electroluminescent display like the original DSKY. That said, screen printed electroluminescent displays on a t-shirt aren’t unheard of. Several years ago, a screen printing company did a few experiments with EL displays on wearables. Of course, if you want a real electroluminescent DSKY display, [Ben Krasnow] has a very modern reproduction of the screen printed display. The electronics of [Ben]’s project do not resemble what flew to the moon in any way whatsoever; the original DSKY had relays. That said, we’ve never been closer to a modern recreation of the display from an Apollo Guidance Computer, and we have [Fran] and [Ben]’s work to point us forward.

END_OF_DOCUMENT_TOKEN_TO_BE_REPLACED

If you like mechanical keyboards, you like switches. Historically, switches were weird, with strange capacitive rubber dome switches in Topre boards, buckling springs in the IBM Model M, and beamsprings in earlier IBM keyboards. This teardown of an HP signal generator has the weirdest keyboard switches ever. They’re being called pulse transformer switches, but they are the strangest, weirdest, and most complicated keyboard switch we’ve ever seen

Mechanically, these keys are mounted on a 1×5 plastic frame with a plunger that presses down on a (brass?) photoetched plate. Mechanically, this is effectively a metal dome keyboard that simply presses a springy bit of metal against a contact on a printed circuit board. That’s the mechanical explanation, the electrical theory of operation is much, much weirder.

Electrically, this keyboard consists of a printed circuit board with two coils underneath each key. The circuit is wired up so two keys are ‘read’ at the same time with a pulse from a multiplexer. This pulse induces a current in the ‘sense’ coil of two individual keys which is sent to a comparator. If both keys are not pressed, the comparator sees a positive and a negative voltage which cancels out, meaning no keys are pressed. If one key is pressed, the metal dome shorts out the transformer underneath the keyboard, meaning only one voltage is seen by the comparator, and that key is registered as being pressed.

This is some crazy keyboard circuitry, and I do not say that lightly. There are ‘acoustic’ keyboards out there which consist of a row of keys striking a metal bar with an acoustic transducer on each end. By measuring the time it takes for the sound of a keypress to reach either end of the metal bar, a keypress can be registered. This is weird and expensive to build, and it’s still simpler than a pulse transformer switch. Check out the video below.