Of Neutron Stars and Pulsars

Of all the oddities out there in the universe, neutron stars surely number among the very oddest. A neutron star is the burnt-out core of a giant star whose outer layers have been blasted away in a cataclysmic supernova. Laid bare and immensely compressed by its own gravitation, the core retains all the original star’s angular momentum and so spins incredibly fast, up to 43,000 RPM, translating to a surface speed of nearly one-quarter the speed of light.

While most neutron stars are difficult to observe, some are blindingly obvious. Some neutron stars, called pulsars, emit powerful, tightly focused beams of electromagnetic radiation along the magnetic poles of the star. If the magnetic poles of the neutron star don’t align with its axis of rotation, the beam of energy sweeps around like a lighthouse, in time with the rotation of the star. It would seem rare that we’d get directly hit by this beam and be able to observe a pulsar, but with an estimated 100 million neutron stars in the Milky Way galaxy alone, the odds that we here on Earth will be in the direct path of the sweeping beams of energy from some of them are good. In fact, something like 2,000 neutron stars, most of them pulsars, have been discovered in our galaxy.

The emissions from pulsars range across the electromagnetic spectrum from visible light to gamma rays. Some of the most interesting pulsars emit intense X-ray beacons, thanks to the acceleration of gasses from a nearby regular star as matter is sucked in by the gravitation of its ultra-dense neighbor. The rain of matter reaches relativistic speeds on its way to the surface of the neutron star, releasing X-ray photons as it accelerates.

X-ray pulsars are among the brightest objects in the sky, and NICER was designed specifically to study them in depth. The business end of NICER is the X-Ray Timing Instrument (XTI), an array of 56 sensitive X-ray detectors. The detectors, along with shielding to protect from interference from nearby sources of radiation, are installed on a rigid optical bench about a meter square. Each detector is a silicon drift detector, or SDD, which are essentially slabs of ultra-pure silicon with concentric rings of electrodes. Incident X-ray photons create a charge within the depleted silicon that “drifts” toward a central anode, where an FET converts the current to a voltage. SDDs can be extremely sensitive both in terms of energy and the number of counts per second that can be registered.

Across from each SDD is an X-ray concentrator. About the size of a coffee can, each concentrator has a series of concentric gold-plated rings that filter out visible light, RF interference, and thermal energy. Each concentrator is individually adjustable, and the entire array was painstakingly adjusted and locked in place with epoxy prior to launch to ensure that they all point in the same direction. Coupled with receivers for time signals coming from the GPS satellites in orbit above the ISS, the complete XTI is essentially an exquisitely sensitive time-resolved X-ray spectrometer, capable of measuring both the energy spectrum of X-ray photons and resolving their time of arrival within 500 nanoseconds.

Once NICER was installed on the space-facing side of the ISS in September of 2017, it began to map the sky in X-ray. As the sun sets on every ISS orbit, NICER springs to life and scans the sky, capturing known X-ray sources and potentially discovering new ones. In doing so, NICER has generated stunning images of the X-ray universe, with bright spots connected by broad arcs. The spots are sources that NICER has tracked for long exposures, while the arcs of the background X-ray picked up while the instrument slewed across the sky to a new target. 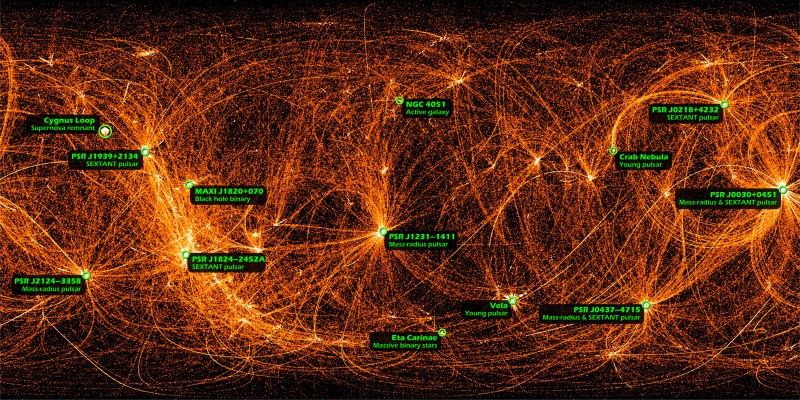 Pretty pictures are hardly the point of NICER’s mission. By carefully recording the spectrum and timing of X-ray signals from known pulsars, NICER will provide the raw data astrophysicists need to determine the true nature of neutron stars. Measuring small frequency variations in pulsar signals will even allow for asteroseismology, perhaps finally revealing what happens inside an object with the mass of two suns crushed into something the size of a small city. And coupled with other instruments, like the Modulated X-Ray Source mounted at the other end of the ISS, NICER is helping to develop high-bandwidth X-ray communications for future deep space exploration. Nice!

One thought on “It’s NICER In Orbit”