For most of us, a vise is the sort of thing you clamp onto the edge of a workbench and crank down by hand. It might even be made of plastic, depending on the kind of work you find yourself doing with it. But it’s safe to say that [WorkshopFromScratch] won’t be soldering any PCBs in the jaws of this nearly 100 lb hydraulic vise that he built from, well… scratch. 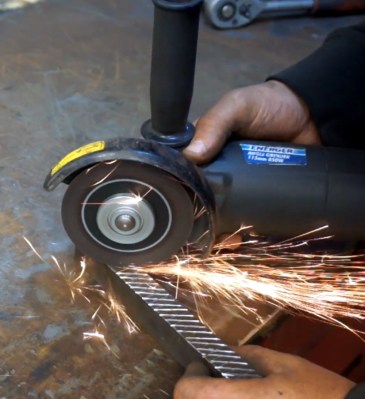 In the video after the break, he takes an array of scrap metal including what appears to be a chunk of racking from the Home Depot and a rusted plate that looks like it could be peeled off the hull of a sunken ship, and turns it into a monsterous vise with five tons of clamping force. Outside of a handful of bolts, a couple of gas struts, and the hydraulic bottle jack that that provides the muscle, everything is hand-cut and welded together. No fancy machining here; if you’ve got an angle grinder, a welder, and of course the aforementioned stock of scrap metal, you’ve got the makings of your own mega vise.

The piece of racking is cut down the center to form the base of the vise, but most everything else is formed from individual shapes cut out of the plate and welded together. Considering the piecemeal construction methods, the final result looks very professional. The trick is to grind all the surfaces, including the welds, down until everything looks consistent. Then follow that with a coat of primer and then your finish color.

While the whole build is very impressive, our favorite part has to be the hand-cut cross hatching on the jaws. With the workpiece in one hand and angle grinder in the other, he cuts the pattern out with an accuracy that almost looks mechanical. If we didn’t know better, we might think [WorkshopFromScratch] was some kind of metalworking android from the future.

Being able to work with metal is a fantastic skill to have, and we’re always impressed to see what folks can produce with a welder and some scrapyard finds. Especially when they build tools and equipment that can be put to practical use.