No it’s not an open source version of Bert’s favorite bathtime toy (though seriously, let us know if you see one), the PocketAdmin by [Radik Bechmetov] is intended to be an alternative to the well-known “USB Rubber Ducky” penetration testing tool from Hak5. It might look like a standard USB flash drive, but underneath that black plastic enclosure is a whole lot of digital mischief waiting to spill out. 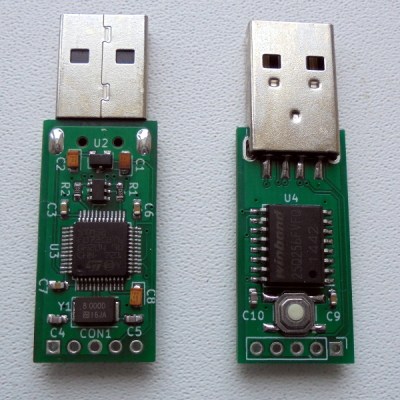 The general idea is that the PocketAdmin appears to the host computer as either a USB Human Interface Device (keyboard, mouse, etc) or a USB Mass Storage Device. In either event, the user has the ability to craft custom payloads which can exploit the operating system’s inherent trust in locally connected devices. The most common example is mimicking a USB keyboard that starts “typing” once connected to the computer.

You can even configure what vendor and product IDs the PocketAdmin advertises, allowing you to more accurately spoof various devices. [Radik] has included some other interesting features, such as the ability to launch different payloads depending on the detected operating system. That way it won’t waste time trying to bang out Windows commands when it’s connected to a Linux box.

The hardware is designed to be as easy and cheap to replicate as possible. The heavy lifting is done by a STM32F072C8T6 microcontroller, coupled with a W25Q256FVFG 32MiB flash chip to store the payloads. Beyond that, the BOM consists mainly of passives and a few obvious bits like the male USB connector. [Radik] has even provided a link to where you can buy the convincing looking USB “flash drive” enclosure.

We’ve seen low-cost DIY versions of the USB Rubber Ducky in the past, but PocketAdmin is interesting in that it seems like [Radik] is looking to break new ground with this project rather than just copy what’s already been done. This will definitely be one to watch as the 2019 Hackaday Prize heats up.