Eric Weinhoffer has had plenty of experience in the product design arena, and this hard-earned knowledge is readily apparent in his mentor session for The Hackaday Prize. These serve to link up Prize entrants with industry experts in order to help them take their projects into production. You still have time to get in on the 2019 Hackaday Prize which is accepting entries until August 25th.

Eric’s work as a Prototype Engineer at Bolt stands him in good stead to deliver valuable advice on manufacturing techniques and prototyping. With projects as diverse as CNC milling machiness and ISS payloads under his belt, Eric was able to help out these entrants with a series of tricky problems that will be familiar to anyone who has tried to take a project out of the lab and into the market.

Let’s take a look at the projects and the advice that were shared during this session.

As Fast As A Speeding Bullet 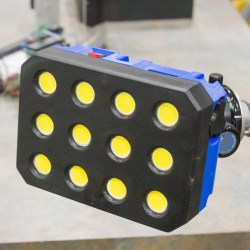 Edgerton is the project of Tyler Gerritsen — a super-fast LED flash designed for high-speed photography. Specifically, he’s used the device to capture bullets in flight with an absolute minimum of motion blur, something not possible with a garden variety flash unit.

With plenty of testing under his belt, Tyler knows just how far he can push his hardware. However, the prototype uses a 3D-printed case that won’t cut it in the marketplace. Eric was able to shed some light on possible solutions for an attractive enclosure. From outsourced resin 3D printing to injection molding and thermoforming, there’s a variety of options out there depending on your specific needs and estimated production numbers.

A Controller With Serious Grunt 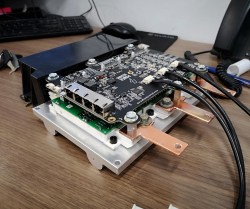 is an exciting project, inspired by the popular VESC brushless speed controller. Where Axiom differs, however, is in its sheer muscle — it’s designed to run 100kW+ electric vehicle motors at over 400 volts!

With EVs beginning to stack up in wrecking yards, there’s plenty of motors and batteries out there to be harvested, and Axiom might just be the perfect controller to drive them. However, most customers for controllers of this type expect certain levels of robustness. Marcos and the team have been investigating various avenues to construct appropriate enclosures for the hardware that meet expected vehicle standards for water resistance and general hardiness. Eric consulted with the team, discussing options for short-run machining along with various casting options, before covering potential connector solutions that will allow the team to meet these requirements. 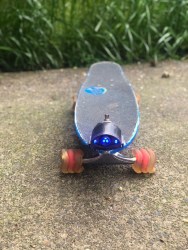 After a recent near-miss, samuraisnax was inspired to improve his visibility to traffic when skating at night. Enter the Longboard Light. Inspired by guitar pedals, it packs some high-brightness LEDs and a big meaty footswitch into a compact and removable package, which can be recharged when you’re not out skating the streets. Once again, environmental resistance came to the fore, with water ingress a potential pitfall for the light which runs close to the ground on often-wet roads. Leaning on his knowledge from past projects, Eric suggested installing a lens in front of the light elements which would make the enclosure easy to seal. Additionally, he shared a helpful tip on making sure screw holes and other case features don’t create leaks which can doom your hardware.

Build Your Own Appliances 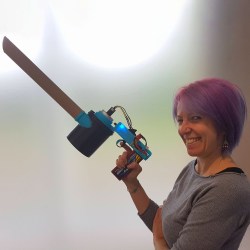 The DIYson came about as an attempt to use hobby electronics to recreate the expensive designer vacuum cleaners that Britain is so famous for. With brushless motors and lithium batteries readily available, building your own cyclonic cleaner is actually pretty achievable. Madaeon was considering the possibilities of taking things to the next level, with the idea of branching out to a wider line of DIY-buildable appliances. With an eye to commercialization, Makerbot’s expansion after starting as an open-source company was cited as a great success in this area by Eric. The session also covered the possibility of selling construction plans for those interested in building at home, and the benefits this brings from not having to handle manufacturing and distribution.

This is the fifth in our series of Hackaday mentoring sessions, but not the last! Sessions are ongoing, so don’t be afraid to check out the list of mentors and sign yourself up!