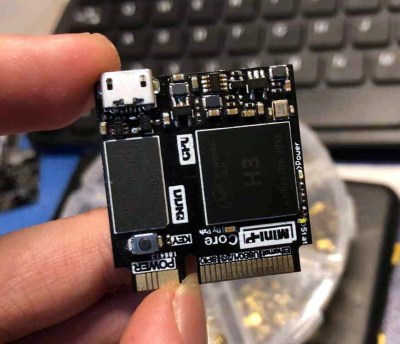 Want To Make A Voice Assistant? First, Make Your Own SBC

We’re used to voice assistants from the likes of Google and Amazon, but [dimension] eschews those by creating their own. It’s a two-PCB device, with a board containing display and sound circuitry mated via a PCI-E connector to a tiny self-designed CPU board which is called the Mini-Pi. This is an Allwinner H3-based SBC which we can imagine having applications beyond this project, but the attention to detail of creating an SBC for the project rather than using one off the shelf is very unexpected. The software is derived from the Jasper project which some readers may already be familiar with, and clearly a lot of effort has been put into making a product rather than a benchtop prototype.

If you have a Roomba or similar robotic home cleaner, you’ll be aware of its limitations. Obstacles can defeat it, and any challenges such as stairs or uneven surfaces are beyond it. A home sweeping robot with far more versatility comes from [Lìrèn] and takes the form of a Transformers-style hybrid between the type of wheeled machine that we’re used to and a hexapod walker. An extra twist is that the hexapod can detach itself from the wheeled sweeper to access spaces with restricted height such as beneath furniture. At its heart is a HiKey development board, which (from a bit of Google Translate detective work) we think is based upon a Huawei Kirin 970 SoC.

There was a time back in the 1990s when the future of mobile computing seemed to lie in the PDA, relatively low-powered small tablets that held time-management and other productivity apps. All of the PDA’s functions have transferred into the smartphone which has delivered on the promise of those early devices and then some, but perhaps there is still a niche for such a device. It’s an avenue [qwert1213131] is exploring with Jakiro, an ESP32 based device sporting both an eInk touchscreen and a small OLED display. It’s interesting, because by revisiting the idea twenty years later with the benefit of components that simply weren’t available to the designers of the originals it can bring some of what was useful in a PDA such as convenience and simplicity along with the integrated wireless and computing power of the ESP and the low-power persistence of the eInk.

Motion Capture For The Rest Of Us

If we think of motion capture, it’s likely that scenes of actors wearing body suits covered in lights spring to mind, in the manner of the systems used for example by CGI artists. But the field of motion capture extends across a multitude of projects and technologies from hacked Nintendo PowerGloves upwards. It’s something [fantc] has made an inroad into, with a one-arm motion capture system using three MPU6050 inertial sensors coupled to an MSP430 family CPU. The whole setup is a compact unit strapped to the arm with a couple of smaller sensor boards, and the interfacing is performed via Bluetooth Low Energy. It doesn’t stretch the imagination to see this approach brought to other limbs with more sensors, perhaps creating full-body motion capture without some of the expensive set-up described earlier.

It’s A Handheld Console, But With So Much More Promise!

At first sight, [Counterattack]’s handheld game console appears to be nothing special, after all while it is undoubtedly nicely built, it is not the only such project to be found. It’s only when it’s opened up do we gain an insight into why it deserves a second look. This is a complete and very well executed platform for the Raspberry Pi Compute Module 3. This was selected because it has the power required for the most faithful PlayStation emulation, but because the Pi is such a widely-supported and versatile device in itself we can instantly see huge appeal for this device in a host of applications beyond the world of gaming. Using a Pi ties you to one of the official form factors, and the Compute module offers a chance to roll your own Pi. If we consider this console as a roll-your-own Raspberry Pi 3 for portable battery-powered applications it becomes of interest far beyond a few PlayStation games.

[HarrytheOrange] brings us a hexapod walker, which would be nothing special were it not that its gait is derived from a study of insect movement rather than from a circular motion. In particular his interest lies in the insect’s ability to retain mobility with less than six operational legs, and he details his rather inhumane research methodology. The walker itself appears to be a straightforward enough design, and if the typical Arduino-style walkers we’ve seen are anything to go by we can imagine there is significant room for gait improvement.

The non-Chinese part of the Hackaday community is frequently fascinated by the work emerging from that country. But we know there is a ton of interesting things going on in the engineering communities there that the rest of the world often doesn’t have the chance to enjoy. What began as a few lone voices giving us a peek at their world is beginning to expand to a flow of interesting work share by the Chinese hardware hacking community to the excitement of non-Chinese-speaking hardware geeks everywhere. We hope that this competition helps to continue that trend, and if the high quality of these projects is anything to go by, we look forward to the Hackaday Prize China returning in future. Congratulations to these finalists, and all who entered!