Manuela Pipino tracked me down on the first day of the Faire with the DIYson in hand. This cleverly named, mostly 3D-printed take on the Dyson V7 handheld vacuum is one of my favorite projects this year. Her booth had a ton of interesting things on display. Lumi Industries focuses on 3D Printing and I’ll talk about their new resin printer in a future article. I greatly enjoyed seeing the headphones that utilized a DIY magnet-membrane construction technique. She was also showing off the MOLBED braille display which was their entry in the 2016 Hackaday Prize.

I spent more than a few minutes in awe of this Volumetric Visualization Device (VVD) humming away on the corner of the Lumi Industries table. It’s something of a persistence of vision display for holograms. The holographic film is held in a frame made of a flexible material. Motors on either side of the film oscillate it up and down with a strong light source below synchronized to the motion. The effect to your eye is the hologram floating in mid-air, although it’s unsurprisingly difficult to capture on video due to the rolling shutter effect.

I first saw these huge cast-resin LEDs at the Hackaday Meetup and stopped by Robert Fizsimons’ booth. I love that he isn’t just showing off the LEDs, but brought along the molds and test versions. His process uses brass welding rod to connect to a circuit board hosting a single LED in a 5050 package. The entire thing is cast with about 200 cl of resin in a mold he made of a silicone liner with a 3D printed frame to keep it from deforming. The leads are cast square around the welding rod and power is injected at the bottom. The resin has been doped ever so slightly to diffuse the light which also hides any bubbles or imperfections in the casting. They look spectacular and I’m told you might find them on his Tindie store before too long.

It was delightful to run into Matteo Berrettoni showing off a ruby laser he built. He was a bit sad that the Faire organizers forbade him to run the laser at his booth, but I’m happy he continued to show it off. The flash tube, ruby rod, mirror, and lens were all sourced from AliExpress and he suspects they’re all second-hand from factory machinery. The flash tube and ruby rod are held in a 3D-printed enclosure that he has been testing both covered in foil and electroplated with copper to increase the power of the output. 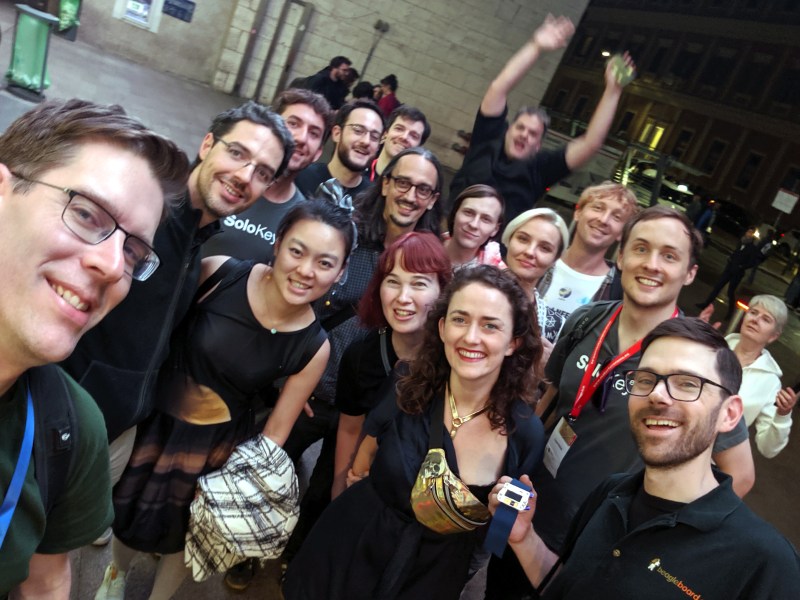 Since the conference center is in the middle of nowhere, we held a little Bring-a-Hack meetup at Rome Termini — the central train and subway station about an hour away from the Faire. Considering the somewhat remote location, we had a great turnout of around 20 people (this image is the very end of the meetup, sorry if you parted ways before this and didn’t make it into the picture).

It was wonderful to meet the team from Ultimate Robotics at the Bring-a-Hack. I had just seen their HUD glasses on Hackaday.io a few days earlier and immediately recognized them. I got to try them on and, although I was skeptical when seeing them online, they work really well! Even cooler, the glasses were wirelessly connected to their uECG module, a wearable ECG the team entered in the Hackaday Prize, to display your heart’s electrical activity in real-time.

Larry Bank brought along several of his projects. There’s a posture coach built to aid in scoliosis treatment which monitors how straight you’re holding your body. He thought nobody would want to see his point-to-point wiring, but I love that sort of stuff! Also along for the ride were some text messaging “pagers” that use the LoRa standard.

I already mentioned Robert’s huge LEDs, but he also brought some interesting blinkies to the meetup. His 3x3x6 RGB LED cube built out of flexible PCB was a huge hit. I enjoyed seeing the Little Red LED Dress which adds some electronic magic with a LilyPad module and some sewable LEDs. So many kids have those LED shoes these days, electronic geek parents should be getting in on adding them to clothes at every possible chance.

Circuit on back of Prism faceplate

Mastro Gippo brought his Prism electric vehicle smart charger along to the meetup. This is one of the twenty finalists in the 2019 Hackaday Prize and we’ve been following his story as he perfected the injection molded housing with a PCB as the faceplate.

Near the closing of the last day I was trying to get to every nook and cranny I had missed and stumbled upon the booth for the Open Thermal Camera, yet another Hackaday Prize entry. You may remember seeing this in an article recently where we applauded the look of the module design. The smartphone app is interesting in that it uses some dithering techniques to help boost the utility of the visualization. And I love it that they had their Hackaday.io page proudly displayed as a QR code!

Crowded Talks in the Space Exhibitions

Packed JPL lecture has huge audience out of frame too

I really appreciated seeing how many people were crowding into the talks at the Faire, especially in the very large section of space exhibits. One of these talks is from Alejandro Miguel San Martìn from NASA’s Jet Propulsion Laboratory about the technical challenges that went into the Mars landing of the Curiosity Rover back in 2012 — he gave this 1-hour talk numerous times throughout the weekend. I enjoyed his lecture and had forgotten the sky crane and thruster-drone aspects of that mission. I happened upon another talk in Italian that I believe was covering orbital mechanics. There was far too much in the space area to capture it all here. One display worth mentioning is a set of amateur radio receivers built for the different OSCAR satellites.

There’s much more to come, and I’ll cover the 3D Printer tech and many other exhibits I saw at the Faire in a subsequent article. To everyone I saw last weekend, thank you for showing off your projects! There was a true sense of the hacker spirit and so many people brought along their prototypes and mistakes to show right alongside the successful builds on display. This tells the story that learning new skills and finding your way out of dead ends is really what makes science happen.

I want to thank the curators of Maker Faire Rome for inviting me to speak, and the Italian Trade Agency for covering the cost of airfare and hotel.