The economies of scale generally dictate that anything produced in large enough numbers will eventually become cheap. But despite the fact that a few thousand of them are tearing across the sky above our heads at any given moment, turbine jet engines are still expensive to produce compared to other forms of propulsion. The United States Air Force Research Laboratory is hoping to change that by developing their own in-house, open source turbine engine that they believe could reduce costs by as much as 75%. 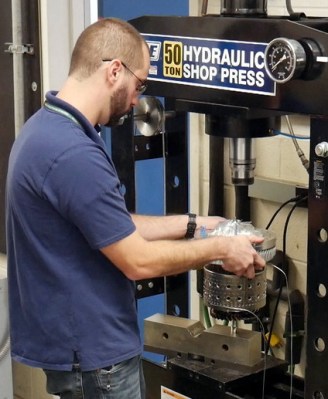 The Responsive Open Source Engine (ROSE) is designed to be cheap enough that it can be disposable, which has obvious military applications for the Air Force such as small jet-powered drones or even missiles. But even for the pacifists in the audience, it’s hard not to get excited about the idea of a low-cost open source turbine. Obviously an engine this small would have limited use to commercial aviation, but hackers and makers have always been obsessed with small jet engines, and getting one fired up and self-sustaining has traditionally been something of a badge of honor.

Since ROSE has been developed in-house by the Air Force, they have complete ownership of the engine’s intellectual property. This allows them to license the design to manufacturers for actual production rather than buying an existing engine from a single manufacturer and paying whatever their asking price is. The Air Force will be able to shop ROSE around to potential venders and get the best price for fabrication. Depending on how complex the engine is to manufacture, even smaller firms could get in on the action. The hope is that this competition will serve to not only improve the design, but also to keep costs down.

We know what you’re thinking. Where is the design, and what license is it released under? Unfortunately, that aspect of ROSE seems unclear. The engine is still in development so the Air Force isn’t ready to show off the design. But even when it’s complete, we’re fairly skeptical about who will actually have access to it. Open Source is in the name of the project and to live up to that the design needs to be available to the general public. From a purely tactical standpoint keeping the design of a cheap and reliable jet engine away from potential enemy states would seem to be a logical precaution, but is at cross purposes to what Open Source means. Don’t expect to be seeing it on GitHub anytime soon. Nuclear reactors are still fair game, though.

[Thanks to Polymath99 for the tip.]

46 thoughts on “US Air Force Says They’re Developing An Open Source Jet Engine; We Say Show Us The Design”