Lead-free solder alloys have been around for as long as people have done soldering, with sources dating back about 5,000 years. Most of these alloys were combinations like copper-silver or silver-gold and used with so-called hard soldering. That’s a technique still used today to join precious and semi-precious metals together. A much more recent development is that of soldering electronic components together, using ‘soft soldering’, which entails much lower temperatures.

Early soft soldering used pure tin (Sn), yet gradually alloys were sought that would fix issues like thermal cycling, shock resistance, electron migration, and the development of whiskers in tin-based alloys. While lead (Pb) managed to fill this role for most soldering applications, the phasing out of lead from products, as well as new requirements for increasingly more fine-pitched components have required the development of new solder alloys that can fill this role.

In this article we’ll be looking at the commonly used lead-free solder types for both hobby and industrial use, and the dopants that are used to improve their properties.

In the Tin of Things

There is a good reason why tin (Sn) is so commonly used in soft solder and solder alloys: it melts at low temperatures (232°C) and offers good wetting (ability to flow on the pad) properties in addition to its ability to dissolve well with most metals. This last property is crucial in forming a good intermetallic compound (IMC). The quality of this IMC boundary determines how durable the joint will be. Both the granularity and number (and size of) any voids in the IMC will affect this durability. 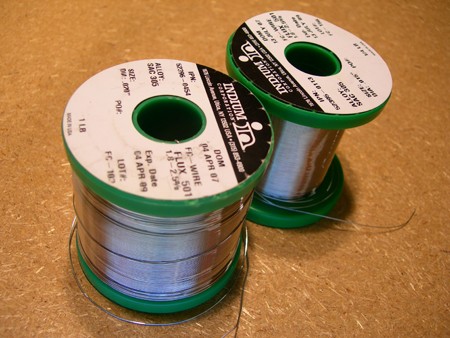 The two most commonly used types of lead-free solder are SnAgCu (tin-silver-copper, also called SAC) and SnCu (tin-copper). SnAgCu alloy with 3% silver and 0.5% copper (SAC305) was initially endorsed for use in SMT assembly, along with a number of other SAC alloys. These other alloys are types with higher silver content, such as SAC387 (3.8% Ag), and SAC405 (4% Ag). These higher silver alloys are true eutectic alloys — completely changing form a solid to a liquid at the melting point of 217°C. In contrast, SAC305 has a range between 217–219°C.

Although SAC is an acceptable solder alloy, the addition of silver does raise its cost. This has driven the industry to use low-silver alloys (e.g. SAC0307) or silver-free alternatives, such as SnCuNi.

Back in the IMC

The key to a reliable joint lies in the quality of the IMC that is forced. It cannot be too thick or too granular, and preferably should not have any Kirkendall voids.

The IMC of each joint is subjected to various types of aging and damage:

Of these, thermal cycling and thermal shock are related, in that both are caused by environmental temperatures. As a joint is exposed to changing temperatures, its individual components will be subject to thermal expansion, which is likely to be dissimilar between different materials. The tensile strength of the joint then determines at which point the resulting strain will cause a crack to form.

Usually, under thermal cycling, the IMC will be subject to recrystallization, which causes a roughening of the IMC that allows for the formation of cracks. Studies have shown that adding La2O3 nanoparticles improves the thermal reliability, mostly by inhibiting the growth of the IMC. High-silver alloys also show better thermal reliability. The addition of 0.1% aluminium (Al) to low-silver alloys also had such an effect, as did the addition of Ni, Mn and Bi to SnAgCu alloys.

Drop impact and vibration are similarly related, in that some type of mechanical deformation is applied, which can affect the PCB, the joint, and the component. Especially with large pin count BGA chips, a drop impact can cause significant damage, testing properties such as the shear strength of the joints. The failure modes from mechanical vibration are similar to those from thermal cycling, caused by the gradual development of cracks.

Finally, electromigration is the most insidious of all, as it does not require any external influences. The ultimate effect of electromigration is the transport of material within the joint and IMC, caused by the gradual movement of ions, as momentum is transferred by electrons and diffusing metal atoms. The current within the joint between the anode and cathode causes cavities to form. Over time, these voids become large enough that cracks can form in the joint and IMC until ultimately the joint fails. At higher temperatures and currents, this process accelerates.

During the 70s, 80s, and much of the 90s, virtually all soldering was done on relatively large pads. Most if not everything involving through-hole soldering using DIP packages or similar. As surface-mounted soldering and the use of smaller packages such as SOIC, TSSOP, QFN and BGAs became commonplace, the strength of the IMC and its durability became much more of an issue as pads became smaller and smaller.

As we saw earlier, electromigration is a major issue which along with those of thermal and mechanical resilience will play major roles now and in the future. Solutions to those issues will determine much of the lifespan of our devices, as well as whether dropping that new smartphone will be a mere annoyance, or fracture half a dozen minuscule solder balls on the main, 0.2 mm pitch BGA package.

Although SnCu as alloy is not preferred for soldering as the copper tends to form a rather coarse and brittle IMC, a micro-alloy variation on this that can compete with, or outperform SnPb and SAC alloys has been around since the 90s, when Nihon Superior developed SN100C, which is SnCuNiGe. Unfortunately, this alloy has been encumbered by patents until quite recently. It has its melting point at 227°C, with the 0.05% of Ni promoting a shiny joint while lowering copper pad erosion. The 0.009% of Ge promotes wetting and prevents the formation of dross.

With this eutectic alloy being cheaper than SnCuAg alloys, and its better properties with for example reworking, it appears to be an interesting choice for both professionals and hobbyists. With the patent having expired (yet ‘SN100C’ still trademarked), many manufacturers have now added this alloy to their catalog, including Stannol and Felder (Sn100Ni+), making it much easier to procure.

Materials Science is About Compromises

At the core of soldering alloys lies the realm of materials science, which is by definition one of compromises. Enhance one quality in one area, and degrade a quality in another. We can see this when we look at using micro-alloying to improve the mechanical stability of the IMC, resulting in worse electromigration resistance, and so on.

Sometimes the statement is made that we had found the perfect soldering alloy with 63/37 SnPb solder, but as electronics miniaturizes ever more and research on soft soldering alloys progresses, we can see a number of requirements appear that were not even remotely an issue back in the 1990s, yet where we can now apply new knowledge to solve them. Reading through scientific papers from 2005 on the topic versus today really shows how far we have come already.

One of the most annoying properties of tin — tin whiskers — still remain one of the hardest to fully solve. Although lead (Pb) did inhibit the development and growth of tin whiskers, it was not a perfect solution. Alloys like SnCuNiGe at this point appear to offer comparable performance in this regard and have been recommended as a drop-in solution.

With issues like the thermal cycling and shear strength of ever-shrinking solder joints becoming an issue, the refining of the alloys we use for assembling PCBs is something that is worth tackling. If we can make the assembly of 500+ lead BGA packages and their reliability over 10+ years of daily use into a near-certainty, then that means less electronic waste that needs to be recycled, or which ends up in landfills.

Similarly, having easier to use and more reliable alloys for hobbyists is also becoming more of a topic. Hobbyists are no longer merely jamming a couple of 74-series DIP ICs into a through-hole board. More often we see QFN, TSSOP, and similar packages are being used. With improved wetting and decreased bridging potential of new alloys, it should make life better for everyone.

95 thoughts on “Lead-Free Solder Alloys: Their Properties And Best Types For Daily Use”