Solder is the conductive metal glue that one uses to stick components together. If you get the component and the PCB hot enough, and melt a little solder in the joint, it will stay put and conduct reliably. But it’s far from simple.

There are many different solder alloys, and even the tip of the soldering iron itself is a multi-material masterpiece. In this article, we’ll take a look at the metallurgy behind soldering, and you’ll see why soldering tip maintenance, and regular replacement, is a good idea. Naturally, we’ll also touch upon the role that lead plays in solder alloys, and what the effect is of replacing it with other metals when going lead-free. What are you soldering with?

Soldering, and its higher temperature cousin, brazing, are one of essentially two ways create metal-to-metal bonds, and they allow the use of low-temperature techniques that still create relatively stable bonds between two metal surfaces. Soldering is also an interesting chapter in the field of metallurgy, on account of it being based around so-called intermetallic compounds (IMCs).

Welding stands in contrast to soldering, where high temperatures melt the metal on both sides of the pieces that are being joined, permanently fusing them. Welding is a high-strength, high-reliability way of joining metal pieces, but is unfortunately wholly unsuited for delicate electronics where excess heat can damage parts and the goal is more to ‘glue’ electrically conducting elements together than to melt them together.

This also leads us to the reason why soldering and IMCs are such a source of trouble, to the point where IMCs are referred to as ‘evil’. IMCs are essentially bits of the two metal surfaces on either side dissolved into the solder, causing enough of a joining that each side of the joint is more or less stably fused with the solder. Unfortunately such an IMC is a far cry from the stable solid metal of a welding joint, and as a result can be brittle depending on exactly which metals were involved in the solder alloy.

But the IMCs formed in soldering are strong enough, and their formation is at the root of why every solder alloy uses tin. Tin has the property that it is very good at letting other metals dissolve into it. In fact, it’s possible to solder with pure tin, although as we’ll see below, most solder is improved by adding other metals into the mix.

It’s physics all the way down

Solder doesn’t melt itself though, and even the construction of the soldering iron tip has a lot of metallurgy hiding underneath the skin. The tips themselves are composite structures, generally consisting out of a tellurium copper core, plated by a durable iron layer, normally covered with tin for the part that’s supposed to be ‘wettable’ and with chromium for the part below the tip where the solder is not supposed to stick. The iron layer was added to prevent the tin in the solder to dissolve the copper of the tip, which used to be a significant issue. 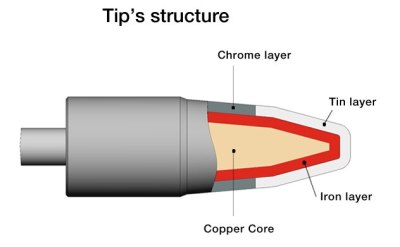 The iron layer is a poor thermal conductor, and should be kept as thin as possible without losing the durability benefits it provides. But because iron rusts, it should be kept covered in a thin layer of tin from the solder.

If one does get iron oxides forming, there are a number of ways to remove this build-up. Essentially this involves abrasive methods to physically remove the oxide layer, or the use of a tip tinner, which generates an acid when exposed to the heat from the soldering iron. This acid is stronger than the mild acid from the flux, so it should remove even the iron oxides. Fresh solder is mixed in with tip cleaner, so the tip is immediately coated and ready to go.

Let’s hear it for eutectic solder

When it comes to that roll of solder people have lying around, rarely more than a cursory thought is given to which alloy it is, and what the exact properties of that alloy are. You might think of solder as “leaded” versus “lead-free”, but there’s a lot more to know than that.

Sticking with lead-based solder for now, a cursory glance reveals that there are quite a number of popular types, along with their melting temperatures, here:

The 60/40 and 63/37 blends of tin and lead are most common among hobbyists. An interesting property of some of these alloys is that they are eutectic, meaning that in their phase diagram, all metals in the alloy are matched in their liquid and solid phases: eutectic solders melt completely at a single temperature.

In lead-free alloys, here too we have an impressive list:

Here we can see that lead-free alloys do indeed have a higher melting point than leaded solder on average, and there are eutectic and non-eutectic alloys available.

The advantage of an eutectic alloy is that it’s far easier to get a good-looking joint with it. While non-eutectic solder will still work, there’s a much larger risk of defects in the resulting joint, which can lead to cracks and other issues over time. Eutectic alloys, on account of the molecular matrix for all metals in the alloy forming at the same time while solidifying, tend to create highly regular, mechanically and electrically stable joints.

On moving to lead-free soldering

Concretely, when moving from soldering with lead-based to lead-free solder, there are two big changes:

As this PDF by Kester indicates, the tin in solder joins not only to the solder joint, but also dissolves the copper and iron in the tip itself, which is why tips eventually wear out. A tip that is designed for 63/37 lead-based solder will consequently not last as long when used with lead-free solder such as Sn99.3Cu0.7 or Sn95.5Ag3.8Cu0.7 because the iron plating will dissolve into the tin significantly faster.

Vice versa, issues can also crop up. While one can use a soldering tip that’s rated for lead-free alloys with lead-based alloys without issues, it is never a good idea to use that tip afterwards for lead-free soldering. Traces of lead can get into the lead-free solder and disrupt both the way the latter melts and then solidifies, likely causing faulty, unreliable joints. 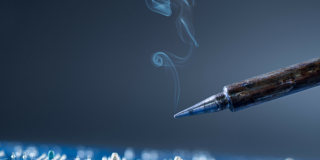 While talking about lead-based solder metallurgy, it’s hard to avoid the twin gargantuan elephants in the room: the health implications of lead and the formation of tin whiskers. A previous Ask Hackaday article already touched upon this recently. The health implications are easy enough to summarize: lead is one of the few substances where there’s no amount that can be considered to be safe. Lead bio-accumulates in the body, and it’s paramount that lead-contamination is avoided in the workplace through cleaning of any contaminated surfaces.

As for the vapor produced while soldering – whether lead-free or lead-based – this will not contain any lead, but it does contain the heated flux vapor, which in the case of rosin produces colophony. This is a complex mixture of gases and particulates which have been found to be irritating to the human respiratory system, damaging lung tissue in the process.

The formation of tin whiskers has been a major topic, long before the move to lead-free solders. Unfortunately the formation of whiskers in metallurgy is a poorly understood phenomenon, with the usual explanation involving compression strength causing the growth of these whiskers. While the addition of lead to tin-based solder helped to reduce the growth of whiskers, it is not a complete fix.

The application of a conformal coating, or the use of specific alloys, can help limit the formation of tin whiskers. It should also be noted that it’s not just tin that is susceptible to whisker formation, other metals are also implicated. Until we better understand the physics behind it, preventing it means hitting upon that right alloy formation by sheer luck.

While we have a great time soldering, it’s also an entry into the science of metallurgy, and even beyond. But after reading this, we hope that you give your solder alloy a little more thought, and keep your tip rust-free and tinned whatever is your blend of choice.  And we’d love to hear any tales you have of tin whiskers.

56 thoughts on “The Fascinating World Of Solder Alloys And Metallurgy”