Have Rocket, Will Travel

It’s not hard to read between the lines when looking at the DARPA Launch Challenge requirements; they’re looking for a small rocket that can be launched on extremely short notice, even when the launch site, payload, and target orbit aren’t disclosed ahead of time. If that sounds a lot like a mobile ICBM launcher, that’s because it basically is. While the low payload requirements of the Launch Challenge (Astra’s rocket can only lift 150 kg to orbit) means the launcher DARPA is looking for could never carry much of a warhead, the concept is effectively the same: launch quickly and from a location your enemy can’t easily predict.

Astra has come up with a unique solution. Rather than a traditional fixed launch structure on a permanent pad, their rocket uses a mobile launch “table” that can be transported with the vehicle. The entire operation can be fit inside of a shipping container, meaning the rocket and its ground support equipment can easily be transported to the launch site inside of a cargo plane, on a train, or even towed through the streets by a truck without arousing suspicion. When the container arrives at a suitably flat location, the mobile pad is set up and the rocket is pulled out of the container. 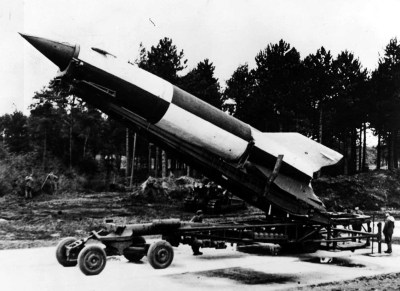 Incidentally, this is very similar to how the German V-2 rocket was launched. Knowing the Allies would quickly target any permanent launch structure with a bombing run, the rocket would be transferred to the front lines over rail lines and then towed out to the launch area with a truck shortly before liftoff. A mobile platform was erected on a flat area like a field or parking lot, and the rocket was tilted onto it. The whole process only took 90 minutes for a well trained team, allowing the Germans to launch as many as 100 rockets per day.

DARPA isn’t looking for that kind of rapid turnaround, but they would like something that could go up in as little as a few days. There’s also a list of predetermined sites that DARPA wants to launch from, so the rocket doesn’t technically need to be quite this mobile. But from a commercial standpoint, the idea of a portable launcher that could be transported closer to the customer is something that Astra co-founder Adam London says aligns well with the company’s goals.

Flying Under the Radar

Part of the reason so few people have heard of Astra is because the company hasn’t existed for all that long. At least, not in its current form. In 2005 Adam London founded Ventions LLC, a company that specialized in developing small liquid propellant rocket engines that were used in several DARPA and NASA projects. When London met Silicon Valley entrepreneur Chris Kemp in 2016, the two decided to start Astra as a way to take that engine experience and built a new launch vehicle around it.

Five of these engines, each about the size of a lawn mower and developing approximately 6,000 pounds of thrust, power the first stage of the rocket. Like with Rocket Lab’s Electron, electric pumps are used to push liquid oxygen and kerosene into the combustion chamber instead of the heavy and complex turbopumps traditionally used by liquid rockets. There isn’t much information known about the second stage, other than the fact that it uses a smaller engine the company has named after Aether, god of the upper sky from Greek mythology.

There are a number of advantages when designing a smaller rocket, but one that might not be immediately obvious is how much easier it is to test. Astra was able to conduct full-scale engine firings at the nearby Alameda Naval Air Station with relatively little fanfare outside of local news agencies reporting on the noise they produced. They also conducted two sub-orbital test launches in 2018 from Alaska’s Pacific Spaceport Complex in near total secrecy. There’s some debate about how successful these two flights were, but by all accounts both vehicles at least got airborne even if they didn’t reach their target altitudes.

Astra has demonstrated the rocket’s key systems, but they still haven’t sent a payload into orbit. In fact, at this point they haven’t even flown a second stage yet; the sub-orbital flights in 2018 both used a dummy upper stage known as a mass simulator. If the rocket’s big enough you can use a Tesla Roadster for this purpose, but in this case it was probably just a block of steel or concrete.

Will this tiny rocket, the last of over 50 proposals received by DARPA, complete the Launch Challenge? We won’t have to wait long to find out. The first orbital test flight for Astra’s rocket is currently scheduled for 3:30 EST on March 1st, and thanks to the magic of live streaming video, you’ll be able to watch from the comfort of your own smartphone. Astra will still have to fire off a second rocket within a few weeks to receive the full prize payout, but just achieving orbit on the first launch would be an incredible accomplishment for this young company.