If you had debilitating pain from repetitive stress injury in the 1990s, there were a lot of alternative keyboard options out there. One of the more eye-catching offerings was the DataHand keyboard made by DataHand Systems out of Phoenix, AZ. The DataHand debuted in 1993 with a price tag around $2,000. While this is admittedly pretty steep for the average consumer, it was well within the IT budgets of companies that wanted to avoid workman’s comp claims and keep their employees typing away.

In theory, this is holy grail territory for anti-RSI keyboards. The DataHand was designed to eliminate wrist motion altogether by essentially assigning a d-pad plus a regular push-down button to each finger. The layout resembles QWERTY as closely as possible and uses layers to access numbers, symbols, and other functions, like a rudimentary mouse.

Ergonomic to the Max

Typing on the DataHand is supposed to be next to effortless. The directional switches are all optical, which probably has a lot to do with the eye-popping price point. But instead of being spring-loaded, these switches use magnets to return to the neutral position.

It really seems like the inventors of the DataHand tried to make their product as ergonomic as possible. The photo above shows one of the first models — a DH200 dated 1993. Those knobs on the thumb sides will raise and lower the depth of the finger wells in the Z direction.

Later models like the Professional and Professional II are even more customizable. They came with two sizes of palm rests instead of that gray rubber grid, and have a second set of dials that brings the finger wells closer to your palm or move them away, depending on the length of your digits. It could really only be better if each set of switches could be adjusted independently.

The Professional II also came with The LapLander™, a lap desk designed to make typing even more comfortable. If that’s still not good enough, you could get the DataChair™, which is your standard 90s task chair with the DataHand halves mounted at the ends of the armrests.

Below is a compilation of informational videos about the DataHand Professional II. Although there’s a bit of repetition, it’s nothing stressful or injurious, and there’s a lot of good shots and information about this model.

Gone But Not Forgotten

Longtime users of DataHand keyboards swear up and down by them, though most say it takes a lot of time and dedication to get back to standard typing speed. Sadly, the company went out of business in 2008 because of supplier issues — they needed to find a new manufacturer and never did. As you might imagine, the price on the secondhand market only climbs higher with time.

Here’s the good news: there have been a couple of attempts to recreate this magical keyboard since then. One of them, the DodoHand project, is covered in a lengthy discussion thread on geekhack going back several years. The project has been forked by several people, and it looks like [JesusFreke]’s lalboard project is pretty much finished.

Are you as intrigued by the DataHand as I am? I found a couple of sites out there with a lot of good pictures and user experience stories. This person made a version of the DataChair™ with the halves mounted vertically so he can type while his arms are hanging down at his sides. 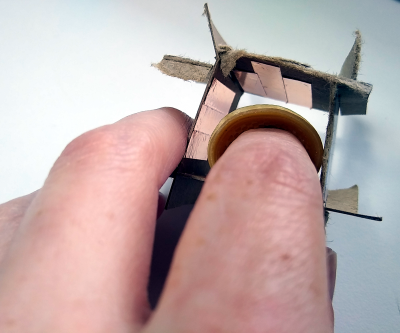 The day I learned about this keyboard, I was so hyped about the 5-way input mechanism that I made a prototype that doesn’t have moving switches. Basically, I took one of those rubber fingers that bank tellers and office workers use and stuck a piece of copper tape on each of the four sides. Then I made a little finger box with copper tape contact pads on each wall.

The prototype doesn’t do anything. but it was interesting to consider how it might work if you just moved your finger around. I’d much rather have tactile feedback, especially with such a strange new system and layout.

I think this concept is really cool, though I would have to try one to know for sure (and I would love to try one). If you have one to sell, hit me up. In the meantime, I might have to try making at least one finger’s worth into a macro board. I think I’ll call it the DataDigit.