As it turns out, the X-37B experiment won’t be the first time the Naval Research Laboratory has demonstrated the concept of wireless power transmission in space. In April, astronaut Jessica Meir verified that the Lab’s light-emitting rectifying antenna (LECtenna) worked as expected aboard the International Space Station (ISS). Although hailed as the first practical test of this concept ever performed in orbit, the scope of the experiment was more limited than you’d probably expect.

The LECtenna demonstrated on the ISS was nothing more than a standard LED and a Schottky diode that had their leads twisted together. Secured in a clear plastic tube, the simple circuit is able to flicker the LED when in close proximity to high frequency energy. In a video on the NRL YouTube channel, Meir brings the simple LECtenna to within a few millimeters of one of the Station’s WiFi access points to prove that the concept works.

Realistically, this demonstration was more about public relations than anything. At the end of the video, Meir explains that viewers can construct their own LECtenna that they can use to visualize energy around their own homes.

In a companion video, an NRL researcher goes through the step-by-step process of building a LECtenna. He concludes the presentation by inviting educators to use the video as part of an interactive lab. It would seem that some inside the NRL want to make sure the people are educated about wireless power transfer, and considering how certain elements of the public can respond to new technology, it’s probably not a bad idea.

Even if it offers limited practical application, the LECtenna demonstration aboard the ISS does essentially work the same way that a proper space-solar installation would. Sunlight gets converted into electrical power by the Station’s solar array, which in turn is used to generate 2.4 GHz electromagnetic radiation in the form of standard WiFi. The small fraction of this radiated energy that was captured by the LECtenna, was then converted back into a DC voltage which lit the LED. But can it be done on a larger scale?

The hardware that the NRL has sent aboard the X-37B, known as the Photovoltaic Radio-frequency Antenna Module (PRAM), aims to find that out under real-world conditions. Using a 12-inch square photovoltaic panel, the device will convert sunlight into electrical power that will drive a high frequency generator. From the published information it’s not immediately clear what the receiver side of the experiment looks like, though presumably there will at least be some method of detecting the amount of microwave energy being radiated from the PRAM.

According to a NRL press release, a major focus of this experiment will be to study the thermal properties of the PRAM while in operation. Keeping the temperature stable could prove to be a challenge, as the cooling system not only has to contend with whatever heat is generated by the microwave electronics but intense sunlight. One of the major advantages of space-based solar power (SBSP) is the extended collection time compared to the surface of the Earth, so the hardware would need to survive nearly continuous operation for years or decades.

It’s unlikely the PRAM will actually be used to send power back down to Earth. Given the immense losses that could be expected (SBSP proposals usually assume transmission losses of around 60%), the amount of energy that would reach the surface of the Earth from such a small solar panel would have no practical application. Though such a sufficiently sensitive receiver, it’s possible that some effort might be made to at least detect the energy beam from a ground station.

The Spear of Destiny

If made practical, space-based solar power could greatly reduce our dependence on fossil fuels while simultaneously addressing the shortcomings of contemporary renewable energy sources and the stigma of nuclear power. Short of perfecting fusion power, it may well be humanity’s best chance at meeting its immense power requirements in a responsible and sustainable way.

Given the incredible importance of this research, one might wonder why it’s being tested on a shadowy military spacecraft rather than the International Space Station or even a dedicated satellite. While it’s nothing more than conjecture at this point, there are some that believe that the military has a vested interested in the technology and wants to see it developed as quickly as possible. 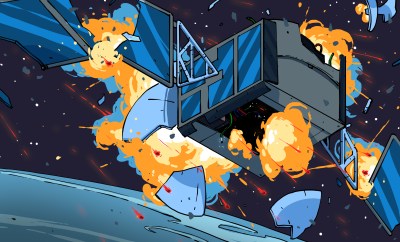 It’s certainly not hard to see why. The ability to beam power to vehicles and bases on the front line with no concern over local infrastructure would be an incredible tactical advantage over the enemy. The Space Force is surely interested in weaponizing the technology for space-to-space engagements as well. Any microwave transmitter powerful enough to overcome atmospheric losses and deliver a useful amount of energy to the Earth’s surface could easily be repurposed as an anti-satellite weapon.

Just as the Global Positioning System started as a military project and evolved into something used by civilians on a daily basis, solar power from space could get its start as an instrument of war. It might not be a particularly pleasing thought, but if it means that the technology gets developed faster and can ultimately be pushed into service for more peaceful endeavours, it might be a price worth paying.