What if a building could stay cool simply because of its paint job? We’re not talking about putting flames on the sides. Purdue engineers have come up with a formulation of white paint that reflects the heat from sunlight and keeps surfaces cooler than their surroundings. Depending on the location, a building with this paint on the roof may not need air conditioning. 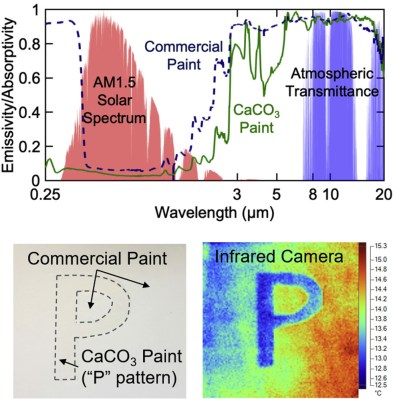 Radiative cooling paint is not a completely new animal, but the formulation developed at Purdue is quite impressive compared to commercially-available paints that only reflect 80-90% of sunlight.

Purdue’s paint reflects 95.5% of sunlight. It can keep surfaces up to 18°F cooler than their surroundings, even in direct sunlight. Where does the heat go? The paint radiates infrared heat, so it escapes the atmosphere and goes into deep space.

How does it do this? With abundantly available calcium carbonate fillers — the chalky stuff that antacids are made of. The paint absorbs next to no UV rays because of the wide band gaps in the atomic structure of calcium carbonate. Take a brief tour of this amazing paint after the break.

We wonder how many rooftops and roadways we’d have to paint with this stuff to have a chance at reversing climate change. It’s not terribly expensive to make, so the problem shifts to widespread education and adoption. What do you think?