We Have the Tools

Larry studied computer science in California, obtaining his Masters degree in the early 70s. He then worked for some years in the aerospace industry, programming big mainframes like Seymour Cray’s CDC 7700. He started his own successful computer company, Purple Computing. But after five years, and in the midst “sky rocketing growth”, he decided to get off the merry-go-round and chose a simpler life in the woods of southern Oregon in 1988.

Somehow Larry came to be in posession of the Arburg injection molding machine. According to Larry’s notes, it was a substantial and well-made piece of 1976 German craftsmanship — over 3 meters long, it could clamp 88 tons and inject 14.5 tons. 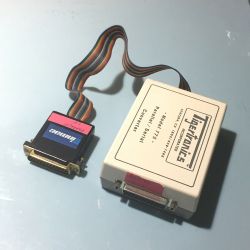 While the press worked fine in manual operation, the automatic mode wasn’t working well. Rather than paying $2,000 to service the machine, Larry, like a true hacker, took things into his own hands. As you did back in the day, he interfaced it to a Radio Shack Model 100 laptop, enhanced with one of his own Purple Computer disk drives. He used a bunch of relays to operate buttons on the press, and electrically sensed the switches and clamp position. Anyone remember the old Tigertronics serial to parallel and parallel to serial converters?

Why did Larry start this project? Because of his Garmin GPS 45 handheld receiver.  Garmin used a non-standard, if not proprietary, connector on this and other models.  It was a four-pin circular connector carrying external power and a NMEA serial interface. If you wanted to power your receiver in the car, boat, or motorcycle, you needed one of these connectors. If you wanted to connect your receiver to your computer for mapping or logging, you needed one of these connectors.  People were making all kinds of hacks to connect to these receivers, including carving up XLR plugs and various industrial circular connectors.

I know that personally, because I was using a similar unit, the GPS III Plus, at the time.  I was frustrated moving it around between two cars, my house and my work office, and that’s how I stumbled upon Larry and the POP in the first place.  I still remember thinking to myself at the time, “I bet his neighbors really love the smell from his house on molding days”.

But then Larry accidentally made 400 Garmin plugs instead of five. Those 400 connectors went to people in 18 different countries.  Larry and his girlfriend, Ardel, grappled with all the ins and outs of international product fulfillment, and eventually learned how to ship everywhere in the world except Bora-Bora. But the project didn’t end there. Requests asking for Purple GPS connectors began pouring in from all over.

Rather than turn these folks away, Larry decided to meet the demand, and established a “pledge” system. He asked you to send him a few bucks, kind of like a tip at a restaurant, or whatever you thought the plug was worth — after you receive the package and can inspect the quality yourself.

Before long, he was shipping over 1,000 connectors per month all over the world. But paying postage on each plug kit was absurd.  A loose network of stocking distributors sprung up, called “pfrancs” (POP Franchises), the term “phranchisee” being rejected as too long to type.  Eventually there were more than 60 pfrancs located in over 48 countries, keeping local stock on hand all over the globe.

To GPS 45 and Beyond

Not content to rest on his purple laurels, Larry continued to expand his GPS connector offerings.  While the original plug worked with over a dozen varieties of Garmin GPS receivers, newer models were coming along.  He made new molds for plugs that connected to the eMap and eTrex GPS receivers as well as the Rino radio. The pfranc network began offering other services, too, like custom cable assemblies priced to be hobbyist-friendly.  This wasn’t much of a stretch for Larry, having patented a similar data cable years earlier for Casio calculators called the PC-Link.

But eventually the demand for these products fell off. The GPS receiver manufacturers eventually moved on to more standard interfaces. I just spot-checked a few Garmin receivers, and they all used either micro- or mini-USB or wireless.  Furthermore, with the growth of GPS-capable smartphones, I suspect the need for standalone GPS receivers has declined except for specialized applications.

I don’t think the slowdown in Garmin sales bothered Larry at all. He was just in it to help out, after all. And he had invested $0.07 for every plug sold into a fund, and was planning to get all of the “pfrancs” together in 2017 to watch the eclipse. It’s a shame that never would come to pass.

But it’s not like the pfrancs were Larry’s only passion. You would not expect less from the kind of guy who refurbishes an automatic industrial injection molder in his basement for laughs. Indeed, it looks like he was also into home-made jet engines, ultralight airplanes, and eventually a scratch-built jet-engine helicopter, from which he naturally took a video when he first flew over to his neighbor’s house.

Most astonishing, at least for visitors to Larry’s house, was his deck. It had a beautiful view overlooking the river, but would also descend 25 m down the hill to the riverbank, on rails. Apparently, sometimes without warning.

I really enjoyed reading through Larry’s old build logs and website.  He was a unique and truly interesting fellow. Here’s what he said about this whole project back in 1996, typos and all:

“…is this cool? One guy, me, and his girl, Ardel ( who thinks i’m crazy but works for us anyway ), and the internet, are creating trusting working relationships between people who are creating a new way to transport physical things from my molding machine to you, fast, easy, and almost free.”

I think we can all agree — it is cool.

[Editor’s note: None of this research would have been possible without the Internet Archive and the Wayback Machine, which makes forgotten websites available today. Consider donating, or at least tell your friends. We use it all the time here at Hackaday to help fight link-rot and the loss of hard-gained hacker knowledge that goes along with it.]

30 thoughts on “Larry Berg And The Purple Open Passion Project”