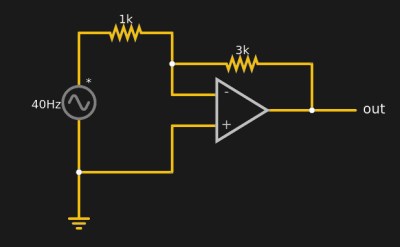 This virtual ground idea makes the analysis of the circuit simple. You can see on the simulation that the amplifier has a gain of 3. So pretend the input is 5V DC or, if you like, change the voltage source. Since the – terminal is virtual ground, we know the current through the 1K resistor must be (5-0)/1000 = 5mA. Rule #1 says the input terminals aren’t going to look like they are connected to anything, so that means the current through the 3K resistor must also be 5mA and one end of it is virtually grounded.

So what’s the output voltage? (V-0)/3000=.005. If you do a little high school algebra, you can rewrite that as V=.005(3000) = 15V. In real life, you wouldn’t want the output so close to the supply rail, but you get the idea. In the simulator, we only specify the maximum and minimum output voltages for this op amp model, so perhaps the power supply is really +/- 16V. That’s my story and I’m sticking to it.

For the non-inverting amplifier the gain was equal to the reciprocal of the feedback network’s voltage divider ratio. That is, with a 1K and 3K resistor, the divider ratio is 1000/(1000+3000)=1/4, so the gain is 4. That makes sense, because in that case, we reduce the op amp’s output voltage while it is trying to make the two terminals equal.

Suppose you have a temperature sensor that puts out a tone from 250 to 300 Hz depending on the reading. The wires going to the sensor are long and you find that you are picking up 60 Hz hum from the AC wiring. Your input signal might look something like the one on the right. The 60 Hz hum is about 5 times a strong as the square wave data signal. How can you recover it?

There are several answers, of course. But if you observe that both the positive and ground wire going to the sensor will pick up the hum, a good answer is to subtract the return leg from the positive leg. Since the noise is the same on both wires, it should subtract out, leaving only the signal of interest. Here’s an example circuit for removing 60 Hz hum: 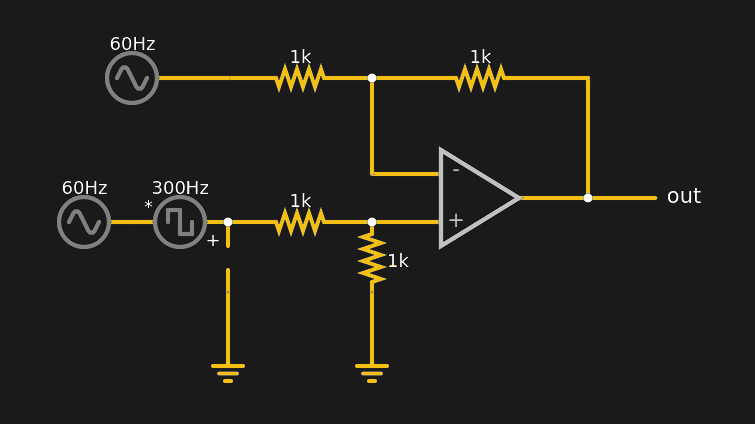 But what happens if both inputs are at 2V and suddenly the input at the + side jumps by itself to 4V? Now the + terminal is at 2V, and this causes the current flowing to change (to zero, in this case). That means the output voltage has to change to set the same current in the feedback resistor. Since that’s zero in this case, the output must also be 2V.

If the zero current is confusing, try a different voltage like 3V in this circuit. When you flip the switch to feed 3V into the circuit, the + terminal because 1.5V so you have 0.5V across the input resistor, which means you’ll need the same current through the feedback resistor and the output will be 1V.

There are a lot more things you can do with op amps, but those will have to wait for a future Circuit VR. While modern op amps are great, they still aren’t perfect. The inputs will have a little leakage. The outputs will not get right up the rail if you draw much current from them in a general-purpose op amp. If you are dealing with high frequency, you’ll need to carefully select parts. Precision circuits may need care for offset trimming and other special design considerations. However, compared to building precision amplifiers from bare transistors, having high-quality op amps is a real time saver.

There are many specialty op amps. Some operate on current inputs. Some have special output stages. For example, comparators are op amps with high speed output stages that tend to saturate quickly one way or the other. There are many choices depending on what’s important to your design. If you want some extracurricular reading on op amp architecture selection, Analog Devices AN-360 is a good overview of the subject.