I was reading Joshua Vasquez’s marvelous piece on the capstan equation this week. It’s a short, practical introduction to a single equation that, unless you’re doing something very strange, covers everything you need to know about friction when designing something with a rope or a cable that has to turn a corner or navigate a wiggle. Think of a bike cable or, in Joshua’s case, a moveable dragon-head Chomper. Turns out, there’s math for that! 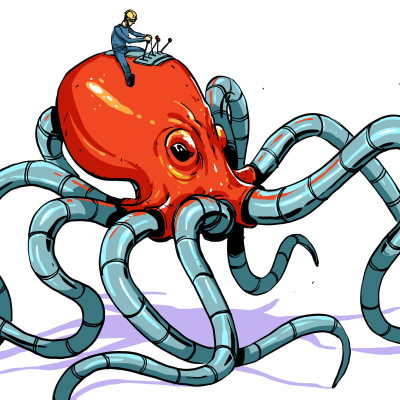 Basically, the more you wrap a cable or rope around something stationary, the more friction you have to deal with. I put this to good advantage last Spring when my son and I were doing some random tree-climbing with ropes. Turns out that four or five loops of climbing rope against fairly frictiony bark is enough to hold the weight of a grown man, with nothing other than the weight of the rope itself on the other end, for instance. I was also using this effect in a recent wall-plotter-bot design that uses simple cable braid instead of the ubiquitous timing belt.

In none of these cases did I work out the capstan equation with my pocket calculator: four loops around is almost always enough™. But by digging into the math and physics, I got more insight. Basically, the friction is an exponential with the angle times the friction coefficient of your cable in the exponent. So what? So, that next turn holds exponentially more weight when you’re climbing. And the grippiness of the tree bark matters in just the same way. You might know this intuitively from experience, but it’s nice to have numbers.

And what’s even better about the insight from doing the math is what doesn’t matter. The radius of the tree falls out, so you can pick a fat branch or a skinny one, as long as it’ll hold your weight!) The fat branch bends less sharply, which gives you less friction per centimeter, but there’s also more centimeters per wrap, and they cancel out. So pick a fatter, rougher tree over a skinnier, smoother one. I would have never thought that!

Here at Hackaday, we’re big fans of rough-and-ready learning by doing. Will this work? Try it out! (If it shouldn’t, and yet it does, it’s a hack.) But there’s also a lot to be said for knowing the underlying math and physics too. Many people think of math as being about crunching numbers, but I find the deeper intuition about which variables in your problem matter, and which don’t at all, infinitely more useful. Learning by doing, guided by a good physical / mathematical intuition, is the best of both worlds. And it saves wear and tear on your mint HP-48G.