It sounds as though there may be more than one post-processing facility possible, but for now everything is available from MatterHackers. However, metal printing still doesn’t come cheap. A roll of filament — it looks like a 1 kg roll — costs $465. That comes with a “ticket” for postprocessing one batch of parts that weigh up to 1 kg. Additional tickets are $50. They also suggest you use a special pen to attain bed adhesion, which costs only $18, but is out of stock as we write this. 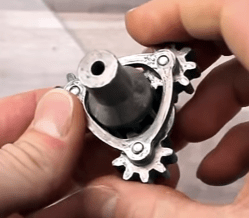 On the other hand, if you need a part in stainless steel, this isn’t that expensive. According to Matterhackers, you can run this filament through most 3D printers, although we are betting you will want a pretty stout extruder and nozzle. You’ll also need a heated bed that can make at least 100 °C. A lot of beds can’t get that high, or have coatings that won’t tolerate that high a temperature. MakerBot’s METHOD X printer can do this, but you could probably upgrade your printer to do it as well.

So how is this better than just having someone do a metal print for you? We can print PLA models to get the design right and then send out to a service provider with a big-money metal printer. It sounds like you might get a faster turnaround by doing it yourself, but it isn’t clear to us why that has to be the case. We took a 40 mm x 40 mm x 4 mm bracket design and asked a service company for a price. In 316L steel, the part would cost $70 shipped. You could get it in aluminum for the same price, or titanium for $112. Gold was also an option, but at $6,400, we’ll pass. The same part in PLA was about $10, and at that price, we’d say it makes sense to print at home. But for metal, we’re comparing a $50 ticket and other material and wear costs with $70, delivered.

The video below shows some design tips, some of which are common sense to designers used to 3D printing. However, some appear to have to do with the sintering process and we wondered how much the part’s dimensions might change after the sintering process. The video claims you should scale your parts 120% in the X and Y dimensions and 126% in height. The video mentions a 100 cubic millimeter limit on parts, but if you read up, you’ll see they really mean a cube 100 mm on each side, which is 1,000,000 cubic millimeters, and significantly bigger.

So will you try this out? Unless you have a pretty robust machine, you’ll need some upgrades first. Then you still have to wait for your metal part to come back in the mail. As cool as it would be to print in stainless, we’ll wait until we can produce the metal part with no outside help.

If we were going to try it, we might think about a ruby nozzle. Maybe we’ll wait for the $400,000 printers to show up on the surplus market.

37 thoughts on “3D Printering: To Print Stainless, You Do Half The Work”