The iPod HiFi was a stereo speaker add-on produced by Apple in the mid-2000s for their iPod range, a $300-plus speaker cabinet with twin drivers per channel, an iPod dock, aux, and TOSLINK interfaces. It’s caught the eye of [Jake], in particular one posted on Reddit that had an extra set of tweeters to improve the HiFi’s lackluster treble. The question was that it might have been an Apple prototype, but lacking his own [Jake] set out to replicate it. 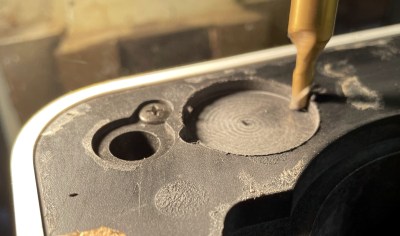 The job he’s done is to a high quality. The baffle has first 3D scanned, and then recesses were milled out of it so the tweeters could be press-fit in. He’s driving them through a simple LC crossover circuit taken from the speaker drive, and reports himself happy with the result.

Unfortunately, we still don’t know whether or not the Reddit original was an Apple prototype or not. We’d be inclined to say it isn’t and praise the skills of the modder who put the tweeters in, but in case it might be we’d point to something that could deliver some clues. The iPod HiFi didn’t use a passive crossover, instead it had a DSP and active crossover, driving four class D amplifiers. If you find one with tweeters and they’re driven from the DSP through an extra pair of amplifiers then put it on eBay as a “RARE BARN FIND APPLE PROTOTYPE!” and make a fortune, otherwise simply sit back and enjoy the extra treble a previous owner gave it.

Of course, some people baulked at the price tag of the Apple speaker, and made their own.