Culminating a year-long project, [Usagi Electric] aka [David] has just wrapped up his single-bit vacuum tube computer. It is based on the Motorola MC14500 1-bit industrial controller, but since [David] changed the basic logic unit into an arithmetic-logic unit, he’s dubbing it the UE14500. Built on a wooden panel about 2.5 x 3 rabbit lengths excluding power supply. [David] admits he has cheated a little bit, in that he’s using two silicon diodes instead of a 6AL5 dual diode tube in his universal NOR gate on which the computer is based — but in his defense he notes that plenty of vacuum tube computers of the era used silicon diodes. 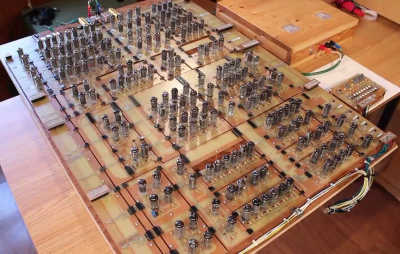 The tube he uses in the NOR gates is the 6AU6 miniature pentode, which he selected because of its availability, price, and suitability for low voltage. [David] runs this computer with two power supplies of +24 and -12 VDC, rather than the hundreds of volts typically used in vacuum tube designs. The modules are constructed on single-sided copper-clad PCB panels etched using a milling machine. The video below the break wraps up the 22-part series, where he fixes a few power supply issues and builds a remote front panel for I/O, and gives a demo of the computer in operation. Alas, this only completes one fourth of the project, as there are three more building blocks to build before the whole system is complete — Program Control (magnetic tape), RAM Memory bank, and a serial input/output module. We look forward to seeing the whole system up and running in the future.

We just wrote about the MC14500 a few days ago, and we’ve also covered [David]’s vacuum tube implementation of a 555 timer among other of his vacuum tube projects, several of which are featured on his Hackaday.io page.