You probably know what a cyberdeck is by now, but you’ll find that people’s definitions differ. Some use the term rather loosely, applying it to things that are luggable at best. But we think you’ll agree that [Daniel Norris]’ chonky palmtop is without a doubt, quite cyberdeckian.

One of the hallmarks of a cyberdeck is that it folds up, often like a laptop in the screen-over-keyboard sense. Not only does chonky palmtop do that, but the split keyboard (more on that later) has this impressive pivot geometry and really satisfying slider mechanism thing going on. The whole thing folds up into a little brick, which [Daniel] says is about the size of an old Asus EEE laptop. (Remember those bad boys? Those were the days.) 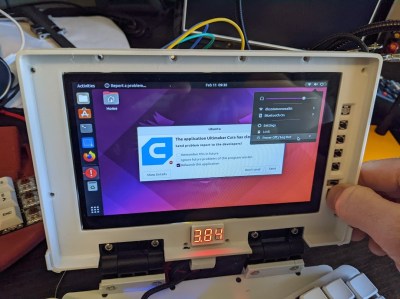 Inside the brick is some stuff you might expect, like a Raspberry Pi 4 and a 7″ touchscreen. [Daniel] also packed in an AmpRipper 3000 LiPo charger, which is especially good for high voltage projects. Speaking of, there is a voltage button to check the battery level, which is then displayed on a trio of 7-segment displays that are smack dab in the middle below the screen.

Now about that split keyboard — that’s a Corne, which is kind of a happy medium between a lot of keys and too few, and 42 is probably enough keys for most people. Considering the overall size, we think that is a great amount of keys.

Not that you can tell by the keycaps on those Chocs, but [Daniel] is rocking the Miryoku layout and firmware. Slide past the break to watch chonky palmtop unfurl, boot into Ubuntu, and close back up in a brief demo video.

42 thoughts on “Chonky Palmtop Will Slide Into Your Heart”