When a company creates an infrastructure of devices, we sometimes subvert this infrastructure and use it to solve tricky problems. For example, here’s a question that many a hacker has pondered – how do you detect when someone puts mail into your mailbox? Depending on the availability of power and wireless/wired connectivity options, this problem can range from “very easy” to “impractical to solve”. [dakhnod] just made this problem trivial for the vast majority of hackers, with the FakeTag project – piggybacking off the Apple’s AirTag infrastructure.

This project uses a cheap generic CR2032-powered NRF51822 board, sending the mailbox status over the FindMy system Apple has built for the AirTag devices. For the incoming mail detection, he uses a simple vibration sensor, glued to the flap lid – we imagine that, for flap-less mailboxes, an optical sensor or a different kind of mechanical sensor could be used instead. Every time someone with a FindMy-friendly iPhone passes by [dakhnod]’s mailbox, he gets an update on its status, with a counter of times the sensor has been triggered. [dakhnod] estimates that the device could run for up to a year on a single battery. 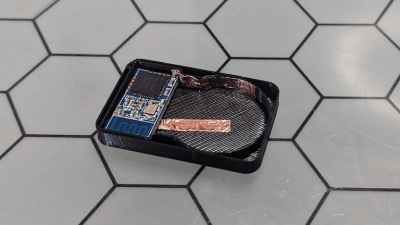 The specific NRF51822 board shown in the title picture seems to be sold for about $7 online, but there are many different NRF51822 boards available, and you should be able to use any one of them. As an example, [dakhnod] sends us a photo of a different sensor he designed, held in a 3D printed case and connecting to a CR2032 battery using copper tape. By now, it’s not unlikely that a friendly hackerspace has a few suitable boards in a drawer somewhere!

This project builds on top of the OpenHaystack project, a research effort that we’ve previously told you about. We’ve even seen the ESP32 microcontrollers being used for building clones before, but the NRF51822 low-power features are unbeatable for practical applications.

29 thoughts on “Check Your Mailbox Using The AirTag Infrastructure”