[Petteri Aimonen] created an omnidirectional LED safety light to cling to his child’s winter hat in an effort to increase visibility during the dark winter months, but the design is also great example of how to use the Microchip MCP1640 — a regulated DC-DC step-up power supply that can run the LEDs off a single AAA cell. The chip also provides a few neat tricks, like single-button on/off functionality that fully disconnects the load, consuming only 1 µA in standby. 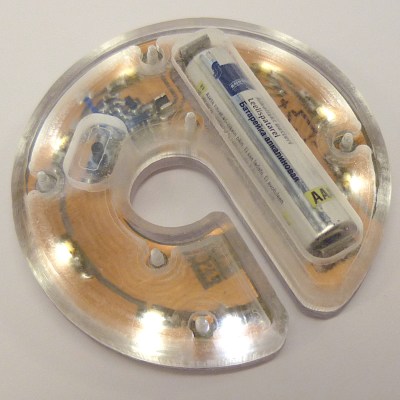 [Petteri]’s design delivers 3 mA to each of eight surface-mount LEDs (which he says is actually a bit too bright) for a total of about 20 hours from one alkaline AAA cell. The single-layer PCB is encased in a clear acrylic and polycarbonate enclosure to resist moisture. A transistor and a few passives allow a SPST switch to act as an on/off switch: a short press turns the unit on, and a long press of about a second turns it back off.

One side effect is that the “off” functionality will no longer work once the AAA cell drained too badly, but [Petteri] optimistically points out that this could be considered a feature: when the unit can no longer be turned off, it’s time to replace the battery!

The usual way to suck a battery dry is to use a Joule Thief, and while this design also lights LEDs, it offers more features and could be adapted for other uses easily. Interested? [Petteri] offers the schematic, KiCAD file for the PCB, and SVG drawing of the enclosure for download near the bottom of the project page.