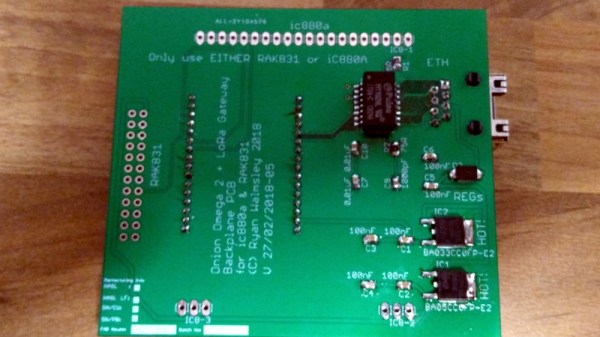 [Ryan Wamsley] has spent a lot of time over the past few months working on a new project, the Ultimate LoRa backplane. This is as its name suggests designed for LoRa wireless gateways, and packs in all the features he’d like to see in a LoRa expansion for the Nano Pi Duo.

His design features a three-terminal regulator, and in the quest for a bit more power efficiency he did what no doubt many of you will have done, and gave one of those little switching regulator modules in a three-terminal footprint a go. As part of his testing he inadvertently touched the regulator, and was instantly rewarded with a puff of smoke from his Nano Pi Duo. As it turned out, the regulator was susceptible to electrical noise, and had a fault condition in which its input voltage was routed directly to its output. As a result, a component in the single board computer received way more than its fair share, and burned out.

If there is a moral to be extracted from this story, it is to never fully trust a cheap drop-in module to behave exactly as its manufacturer claims. [Ryan]’s LoRa board lives to fight another day, but the smoke could so easily have come from more components.

So that’s the Fail of The Week part of this write-up complete, but it would be incomplete without the corresponding massive win that is [Ryan]’s LoRa board itself. Make sure to take a look at it, it’s a design into which a lot of attention to detail has been put.