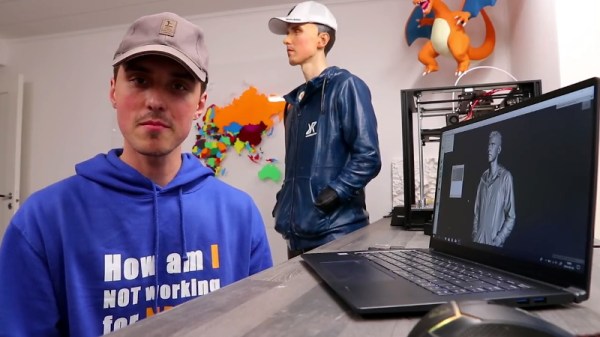 It’s possible to have an enjoyable weekend touring a city with a stolen cardboard cutout from some advertising display or other. However, it’s 2019, and 3D printing means you can go so much further. [Simon] of RCLifeOn went so far as to print a lifesized body double of himself, and it’s only slightly creepy! (Video, embedded below.)

The model was sourced from a 3D scan [Simon] had done with commercial hardware. An Optimus P1 industrial-grade 3D printer was used to print the parts, with total printing time being around 200 hours. Adhesive was used to join the various segments together, and the assembly was then sanded and primed, ready for paint.

Unwilling to tackle the task alone, [Simon] enlisted a professional painter to help put the finishing touches on the piece. The end result is impressive, particularly from a distance. [Simon 2.0] was then sent out to the city centre, aiming to raise money from bewildered passers by.

We suspect the market for custom body doubles will only increase as the technology to create them becomes more widespread. If you’ve tackled a similar project, be sure to let us know. Video after the break.

END_OF_DOCUMENT_TOKEN_TO_BE_REPLACED

[Christopher] from the Bamberg Germany hackerspace, [Backspace], wrote in to tell us about one of the group’s most recent projects. It’s a Kinect-based 3D scanner (translated) that has been made mostly from parts lying around the shop.

There are 2 main components to the hardware-side of this build; the Kinect Stand and the Rotating Platform. The Kinect sits atop a platform made from LEGO pieces. This platform rides up and down an extruded aluminum rail, powered by an old windshield wiper motor.

The Rotating Platform went through a couple of iterations. The first was an un-powered platform supported by 5 roller blade wheels. The lack of automatic rotation didn’t work out so well for scanning so out came another windshield wiper motor which was strapped to an old office chair with the seat replaced by a piece of MDF. This setup may not be the best for the acrophobic, but the scan results speak for themselves.

END_OF_DOCUMENT_TOKEN_TO_BE_REPLACED

Looking for a professional 3D scanning setup for all your animation or simulation needs? With this impressive 3D scanning setup from the folks over at [Artanim], you’ll be doing Matrix limbos in no time!  They’ve taken 64 Canon Powershot A1400 cameras to create eight portable “scanning poles” set up in a circle to take 3D images of, well, pretty much anything you can fit in between them!

Not wanting to charge 64 sets of batteries every time they used the scanner or to pay for 64 official power adapters, they came up with a crafty solution: wooden batteries. Well, actually, wooden power adapters to be specific. This allows them to wire up all the cameras directly to a DC power supply, instead of 64 wall warts.

To capture the images they used the Canon Hack Development Kit, which allowed them to control the cameras with custom scripts. 3D processing is done in a program called Agisoft Photoscan, which only requires a few tweaks to get a good model. Check out [Artanim’s] website for some excellent examples of 3D scanned people.