You know what’s cool? Using your engineering knowledge to solve problems that you have while building something. This is exactly what [Reinis] did when his 3D printer’s endstop wasn’t working.

Many of us automatically go to a microcontroller when we run into a problem with a sensor, but often a simple analog filter will do the trick. The endstop in [Reinis’s] RepRap style 3D printer was giving off an unusual amount of noise when closed. When he hooked the endstop up to his oscilloscope, he was shocked to see how much noise there really was. In comes the low-pass filter. Unhappy with the response time of his low-pass filter, [Reinis] solved the problem using a pullup resistor. Two resistors and a capacitor was all that he needed to fix the problem. A great solution!

How have you used analog filters in your projects? Send us a tip and let us know! [Babak] created an in-depth tutorial on how he got his BeagleBone Black to control a servo from a web browser.

[Babak] configured a pin on his BeagleBone Black (BBB) as a PWM line and connected it to the control line on a micro hobby servo. The BBB is running a Node.js web server that displays a simple web page to control the servo. The browser sends a WebSocket request to a small WebSocket node server also running on the BBB that then writes the appropriate PWM value to the pin connected to the servo.

The code for node WebSocket server and web server can be found on his GitHub page. There is also a small node library to control PWM lines on the BBB. Though the end result is simple, controlling the servo can be done from any browser that can make a network connection to the BeagleBone Black. Check out the video after the jump for a description and demonstration.

END_OF_DOCUMENT_TOKEN_TO_BE_REPLACED

Looking for a professional 3D scanning setup for all your animation or simulation needs? With this impressive 3D scanning setup from the folks over at [Artanim], you’ll be doing Matrix limbos in no time!  They’ve taken 64 Canon Powershot A1400 cameras to create eight portable “scanning poles” set up in a circle to take 3D images of, well, pretty much anything you can fit in between them!

Not wanting to charge 64 sets of batteries every time they used the scanner or to pay for 64 official power adapters, they came up with a crafty solution: wooden batteries. Well, actually, wooden power adapters to be specific. This allows them to wire up all the cameras directly to a DC power supply, instead of 64 wall warts.

To capture the images they used the Canon Hack Development Kit, which allowed them to control the cameras with custom scripts. 3D processing is done in a program called Agisoft Photoscan, which only requires a few tweaks to get a good model. Check out [Artanim’s] website for some excellent examples of 3D scanned people.

END_OF_DOCUMENT_TOKEN_TO_BE_REPLACED If the space station were left to its own devices, the living quarters would get incredibly hot. There are computers, hardware, and six crew members, all generating heat that must be gotten rid of. To do this, there are two heat exchangers inside the station that take warm water, dump that heat to ammonia, and send that ammonia out to panels outside the station. On December 11, 2013, Loop A of the thermal control system shut down, putting the station one failure away from evacuation. Plans for a spacewalk were tabled, but the ground crew managed to fix this hardware failure by telling the astronauts to push buttons, a metronome, and a software patch.

The problem with Loop A of the Internal Thermal Control System was a flow control valve that regulated the amount of ammonia flowing through the heat exchange. Too much ammonia, and the station would be far too cold. Too little, and it would be too hot. This valve is electronically controlled and takes exactly 13 seconds to move from open to closed. The first attempt at fixing the problem was having ground crew send the command to open the valve and cut the power halfway through. This involved using a metronome app on a phone to send two commands 6.5 seconds apart. It worked, but not quite well enough.

The failure of the metronome technique led [Todd Quasny] to write a script to turn the ‘on’ and ‘off’ commands from the ground to the ISS with millisecond resolution. This meant the commands to control the valve could be sent with the right delay, but they weren’t received with the right delay. This is a problem that had to be fixed from the station’s computers.

To finally solve the problem, ISS software engineer [Steve Joiner] was called in to write a software patch for the thermal control system. This is spaceflight and writing software is a long a laborious process of testing and code reviews. Nevertheless, the team managed to write and upload a patch in just two days.

This patch gave controllers the ability to control the valve with a resolution of 100 milliseconds, good enough for very fine control of the thermal system, and all without requiring the massive amount of planning that goes into a spacewalk or resupply mission.

Ups to [Ed Van Cise] for this tip. If you’re curious about the headline…. 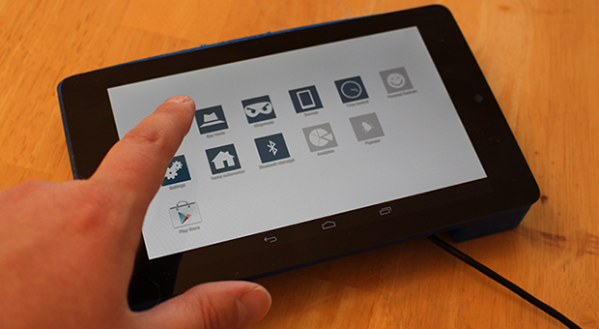 How would you like a 7″ tablet with a Quad-core ARM Cortex A9 processor, USB 3.0, 32 GB of storage, 802.11ac, four ports of Gigabit LAN, Bluetooth 4.0, NFC, SATA, HDMI, built-in Zigbee and RFID modules, a camera, speaker and microphone, all for $170? Sound too good to be true? That’s because it probably is. Meet SOAP, the home automation router with a touchscreen, that’s shaping up to be one of the largest scams Kickstarter has ever seen.

There have been a few threads scattered over the web going over some of the… “inconsistencies” about the SOAP kickstarter, mainly focusing on the possibility of fake Facebook likes and Twitter followers. There’s also the question of their development process: they started building a router with an Arduino, then moved on to a Raspberry Pi, a Beaglebone, Intel Atom-powered Minnowboard, the Gizmo Board, PandaBoard, and Wandboard. If you’re keeping track, that’s at least six completely different architectures used in their development iterations. Anyone who has ever tried to build something – not even build a product, mind you – will realize there’s something off here. This isn’t even considering a reasonably accurate BOM breakdown that puts the total cost of production at $131.

The most damning evidence comes from screenshots of the final board design. These pics have since been removed from the Kickstarter page, but they’re still available on the Google cache. The SOAP team claims they’re putting USB 3.0 ports on their board, but the pics clearly show only four pins on each of the USB ports. USB 3.0 requires nine pins. A closer inspection reveals these screenshots are from the files for Novena, [Bunnie Huang]’s open source laptop.

END_OF_DOCUMENT_TOKEN_TO_BE_REPLACED