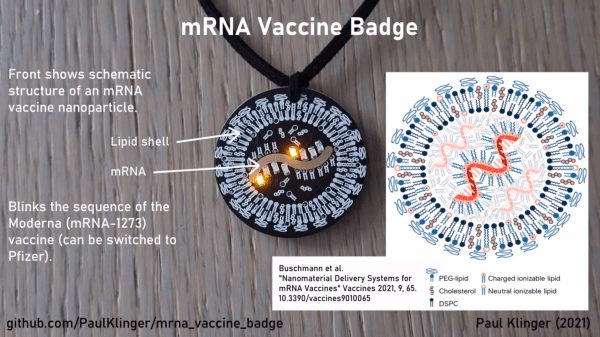 The badge, which is designed to be worn like a pendant, will slowly blink through all 4,000 nucleotides of the Moderna vaccine over the course of 10 minutes. Watch the video after the break to see it in action. Don’t worry if you got the Pfizer vaccine, you can use the interface button on the back of the badge to change over to Pfizer’s mRNA sequence instead. There’s even a handy legend on the badge, identifying the lipids in case your microbiology skills are a bit rusty.

On the reverse side of the board, you will find a handful of current limiting resistors, a CR2032 battery holder, and the ATtiny1617 microcontroller that runs everything. To assist in converting the mRNA sequence into LED pulses, [Paul] wrote a Python script that will automatically import the nucleotide string from the standard .fasta file and store each nucleotide in just 2 bits, allowing the entire sequence to fit in the program memory of the microcontroller.

This isn’t [Paul’s] first RNA-related project; he originally developed the aforementioned Python script to compress the entirety of the COVID-19 sequence, containing over 30,000 nucleotides, into program memory for his Virus Blinky project, that we featured last year.