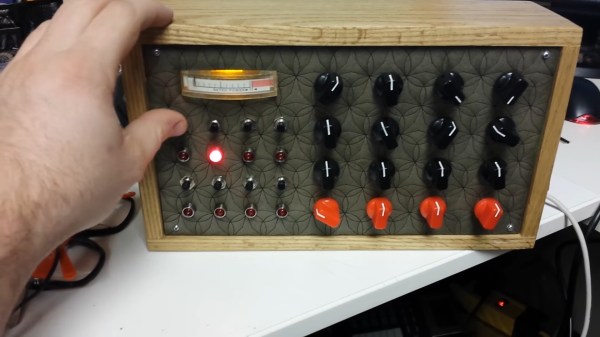 In the world of homebrew synthesizers, there are plenty of noiseboxes and grooveboxes that make all kinds of wacky and wild noises. However, common projects like the Auduino and Atari Punk Console are often limited in that they can’t readily be programmed to play multiple notes or any sort of discernable rhythm. [Nick Poole] changes this with his Auduino step sequencer build.

The build takes the Auduino grain synthesizer, and modifies it by adding a step sequencer. This is possible as the Auduino code, which runs on the old-school ATMEGA-based Arduinos, is incredibly fast, leaving plenty of processing time for extra features to be added. [Nick] adds eight LEDs and eight buttons to the build, allowing the user to select one of eight steps to modify. Then, the sound parameters for the step can be altered with the standard Auduino controls. This lets the user quickly and easily build up 8-step melodies, something that was previously impossible with the Auduino.

It’s a fun build, and one that makes a great intro into the world of DIY synth builds. The techniques learned here will serve any aspiring maker well if they dive further into the world of modular synthesis and associated arcana. Video after the break.

END_OF_DOCUMENT_TOKEN_TO_BE_REPLACED

Tinker.it has published plans for building a software synthesizer using an Arduino. The Auduino uses granular synthesis to create a truly unique sound. The grain is constructed from two triangle waves. Each one has adjustable frequency, decay rate, and the repetition rate can be changed too. The Arduino just needs five potentiometers attached to the analog inputs and an audio jack on the digital out. You don’t have to use pots; you can use anything that varies the analog input between 0 and 5 volts. A video of the device is embedded after the jump. END_OF_DOCUMENT_TOKEN_TO_BE_REPLACED