Tinker.it has published plans for building a software synthesizer using an Arduino. The Auduino uses granular synthesis to create a truly unique sound. The grain is constructed from two triangle waves. Each one has adjustable frequency, decay rate, and the repetition rate can be changed too. The Arduino just needs five potentiometers attached to the analog inputs and an audio jack on the digital out. You don’t have to use pots; you can use anything that varies the analog input between 0 and 5 volts. A video of the device is embedded after the jump. END_OF_DOCUMENT_TOKEN_TO_BE_REPLACED

Google just announced the release of SketchUp 7. SketchUp is a 3D modeling program with a fairly robust free version. They’ve added quite a few features and the one that caught our eye in particular was dynamic components. Dynamic components have behavior specific to the object. The example in the video above shows a staircase changing the number of steps as its height is increased instead of distorting the overall staircase shape. The new version also allows for interaction, so model properties change based on user actions.

Google has always encouraged sharing of objects created in SketchUp. Thingiverse launched today with a similar emphasis. The site is built to encourage the exchange of plans for physical objects. It supports many different file types from plain images, AutoCAD dxfs to Eagle schematics. Many of the designs already posted are made to be cut out by a laser cutter or built by a 3D printer.

[Cameron Adams] recently appeared on a panel about JavaScript libraries. He represented the hard working coder that still wrote everything from scratch. He wanted to make something mindblowing for the audience. He ended up creating the JS-909 drum machine entirely in javascript without relying on libraries or flash. While he makes no claims of compatibility, it certainly is a nice bit of kit.

Adding LEDs makes everything better. Watch this video as a regular old DS gets turned into one of the most awesome things on the planet. A ton of LEDs were added, some to the body, some to an extra cartridge, some behind buttons. Parts are wired into the speakers, so you get nice effects to your music. We’ll bet the battery life suffers, but who cares. This thing is worth it. This was originally taken from Nico Nico Douga, which overlays the comments on the video. 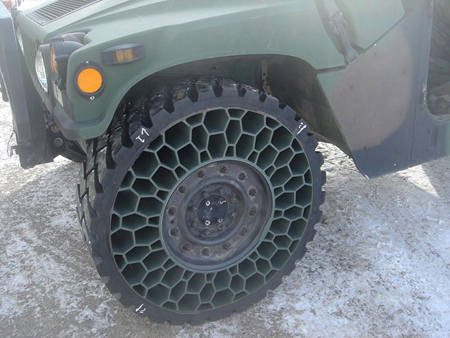 A new breed of tire has been developed that won’t go flat, even if it gets bombed. Resilient Technologies L.L.C. has started making these decidedly cool looking tires for the military. The honeycomb of stiff but flexible plastic acts as a shock absorber just as an air filled tire would. Unlike a normal tire, it won’t pop. You would have to completely destroy the tire to stop these. The article mentions that this isn’t the first of its kind. Michelin has made the “tweel” for industrial uses, but you may recall the video of the Audi driving around a course using them. If not, check it out after the break.